Dubai Peregrines: Peace and Politics in the Muslim Regions 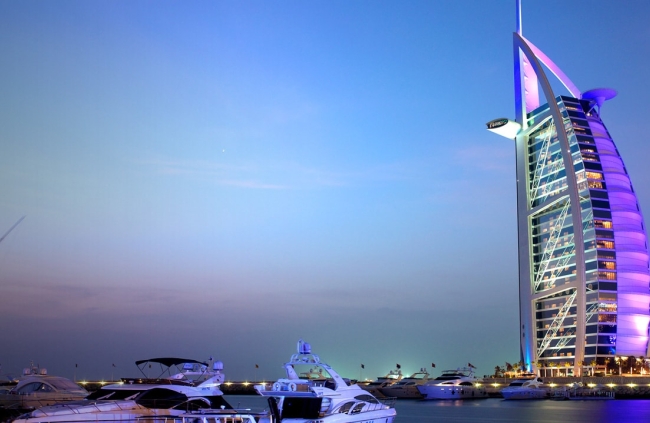 Dubai’s intermittent sky rises, its boulevards plied by endless and often flashy cars, exclusive private residences surrounded by manicured lawns, and principality’s posh restaurants with pricey international cuisine witness an unchallenged triumph for Westernism. Built by easily and cheaply available blue collar labour from South Asia--routinely vulnerable to middle men and human traffickers--and systemically maintained by white collar expatriates themselves divided between the Westerners and South Asians, Dubai is seen both as a modernist miracle and a luxury dreamland—depending upon how one may like to view it. Its detractors may see in it a pinnacle of consumerism anchored on capitalist ethics, fully reflective of the erstwhile indentured labour that is lorded over by a small community of locals—the Emiratis—who sit atop the pyramids of a service sector economy. A smaller version of Manhattan with a financial district patterned upon the City of London, Dubai has got something for everyone. The Afro-Asian poor struggle hard to come here to work long hours as back home unending shackles of gnawing poverty await them as blind alleys. The rich come here to flaunt their wealth away from the tax hecklers, inquisitive peers and prying journalists; thus, everyone is eased into a pre-existing class capsule.

The bankers, hoteliers, property developers and certainly financiers and consultants of all types—purveyors of globalisation from North Atlantic regions-- find new fortunes in Dubai, which, after Singapore and Hong Kong offers status, power, sun, luxury and most of all a high quality living standard under the familiar dictum: ‘pay as you go’. Further below them in the hierarchy are the white-collar expatriates whose education, skills and eagerness to work among fellow non-Whites posit Dubai as a land of opportunities. Many of these younger Asians—second-time expatriates—have European and North American passports and degrees from Western universities, which allow them a greater sense of security, efficient services and quality housing. Dubai is also the home to retired generals, runaway politicians, tax evaders and deposed civil servants, who have decamped from their homelands with millions to invest in property businesses. The former Pakistani dictator, General Pervez Musharraf, when faced with several legal cases in his homeland, fled to Dubai on feeble medical grounds and was conveniently eased out by his khaki colleagues. Same is the case with Asif Zardari, country’s former president and Benazir Bhutto’s widower. In fact, Indians and Pakistanis, respectively, are the second and third largest investors in Dubai’s property market, after the Eniratis, and they also make a sizeable proportion among blue-collar workers, followed by Sri Lankans, Bangladeshis and Afghans. There are certainly Arab entrepreneurs from other Gulf States, Egypt and Lebanon and a small presence of African diaspora. Surely, other than the Russian tourists at the Jumaira Beach and East European women in the hospitality business, it is the Philipino women who comprise the largest proportion when it comes to domestic help. More than individuals, Dubai’s upper most crust—the Emiratis-- are interested in attracting money and skills to grease and operate their little kingdom but are quite exclusive when it comes to naturalisation.

Dubai’s ever-growing shopping malls, precursors of Bicester’s Shopping Village, yet patterned on their American forbears exhibit modernity with its unchallenged invincibility on this side of the Gulf. No wonder, many other Muslim states and societies yearn to have their own Dubais and it is not unusual to come across senior people remembering Beirut as the Paris of the Middle East before it was engulfed by several internal and regional wars. Dubai’s financial utopia though reflective of a rigid class system---much like the neighbouring Abu Dhabi and Sharjah--also hides tensions and sordid volatilities across the blue waters, which have sadly become the region’s more apparent characteristics over the past four decades. Dramatic and equally traumatic developments including the Soviet invasion of Afghanistan, Iraq-Iraq War, the Second Gulf War, 9/11 and the Western invasion of Afghanistan—longest of its kind in recent history and with no victors but endless victims—have bequeathed millions of widows, orphans and refugees in Southwest Asia.

The harrowing sanctions of the 1990 and the second invasion of Iraq in 2003, the rise of ISIS/DAESH itself a beneficiary of de-Baathification, and President Assad’s refusal to accept the demands of the Arab Spring in Syria followed by an internecine civil war and multiple interventions, have collectively left enduring legacies in the Arab-Kurdish heartland. ISIS has been recently defeated in Mosul and beyond whereas in Syria, thanks to Russia, Hezbollah and Iran, President Assad defiantly remains in command, yet the militant group active as a death cult has now expanded its tentacles to Afghanistan with daily bomb blasts claiming scores of innocent lives. In a familiar metamorphosis, ISIS has shifted to places like Afghanistan and Libya and amidst undiminished Saudi-Iranian rivalries and contestations all across the Middle East it is pursuing a pernicious nihilism.

Whereas across the Oxus, Central Asian republics remain quiet but no less watchful of transforming neighbourhoods, Pakistanis are eager to develop Gwadar into a new Dubai, if not Singapore, even though their regional rivals and some Baloch dissidents are no less complacent in causing strains for them. In Soutwest Asia, other than the human and financial costs of seven-decade long Indo-Pakistani rivalries featuring warfare, secessionism and nuclearisation, relations among the three polities of Pakistan, Afghanistan and Iran are still deficient on mutual trust and cordiality.  Afghanistan accuses Pakistan of harbouring and helping predominantly Pashtun Taliban who, since their dispossession in October-November 2001, have sustained an enduring rebellion against the Kabul regime and NATO forces. Pakistan, confronted with geo-political threats to its security from a hostile India and unfriendly Kabul, has been attempting a balancing game though keeping Washington pacified is proving difficult with its insistence on “Do More”. Pakistan is worried over growing Indian influence in Afghanistan and with President Trump incessantly critical in his admonishments, Islamabad has been steadily seeking proximity with Moscow while cementing its relations with a globalised Beijing.

With the United Nations and other multi-lateral forums such as the EU, the Arab League, the Organisation of Muslim Co-operation (OIC), and the South Asian Association for Regional Cooperation (SAARC) already sidelined if not totally redundant, civil societies across the divides valiantly seek peace and co-existence. Mostly on the receiving ends of official, ethnic, extremist and sectarian backlash, several intellectuals, opinion makers, journalists, female activists, human rightists and even some religious elements are seeking new paradigms to ease multiple human miseries. For them, Saudi-Iranian rivalries are as damaging through their pernicious Sunni and Shi’i henchmen as are the dire external interventions all the way from Kashmir, Palestine, Afghanistan to Iraq and Libya, and from Syria to Yemen. It may require many more vigorous efforts and even decades to obtain those ideals but it is a worth while idealism that one observes all the way from the Nile to the Indus and even beyond.

The print and media channels in the Gulf and North Atlantic regions are focused on the ongoing protests in Iran that began last Thursday of 2017 in Meshed-- the country’s second largest city and a holy place for Shi’i pilgrims. Other than claiming more than twenty lives so far, the protests have spread to other major cities voicing economic and socio-political grievances. Angry Iranians with a fair proportion of younger women demand an urgent reorientation of national policies away from fighting wars in the Arab Middle East and seek to decrease powers enjoyed by their clerics. Turkey is still a strong regional actor with a formidable economy unlike its other neighbours, yet authoritarian policies directed against dissidents and intellectuals have dismayed those Muslim groups, who earlier adored Ankara as a role model for the rest. While Morocco and Algeria, unlike Libya, are stable, Tunisia remains the only beneficiary of the Arab Spring. It is here where, in 2011, the mass movement led to the expulsion of the dictator and subsequent establishment of a democratic order by coalition partners. The Islamists and modernists are working together in Tunisia unlike Egypt, Yemen and Syria where movements for civil rights and democracy have been subjected to severe coercion and fragmentation. Egypt, the most populous Arab country, has reverted to a quasi-military rule whereas Saudi Arabia, for the first time, is openly displaying its dynastic feuds. In Jordan, the recent reshuffles also reveal tensions among the royal siblings whereas Bangladesh is being run by a single party dispensation while all other parties and politicians remain on the receiving end. Indonesia, the largest Muslim nation, is steadily charting its course through a democratic dispensation though Nigeria and Sudan still need to find their pluralist democratic bearings. Senegal, unlike a discretionary democracy in Malaysia, is a strong and viable plural democracy while Bosnia and Kosovo stay precarious given undiminished regional threats and internal susceptibilities. Of course, Muslim minorities in India, Russia and China—more like their other recent Diaspora counterparts— generally remain strong supporters of secularist ethos since rising populism poses a pernicious threat to communal peace. To a great extent, militant versions of political Islam have immensely exacerbated the predicament of Muslim masses across the continents giving multiple fillips to Islamophobia other than huge losses in human lives and heritage. Still, as seen in a recent Zogby poll of 30,000 adults in ten Arab countries, Muslims remain divided and even polarised between the Conservatives and Moderates though interestingly both desire systemic reforms for a greater good. (The Gulf News, 2 January 2018)

It is not just the countries in the Middle East, North Africa or Asia, almost every state in the region needs prioritising their own domestic prerogatives anchored on participatory systems, egalitarian policies, empowerment of women and minorities, and economic well being. Arms race, interventionism across the national borders and using proxies for the same have to be shunned. In the same vein, Trump, Netanyahu and their backers in the West must abstain from fanning ethnic and inter-state volatilities and should strictly avoid interventions, which have never been successful besides causing enormous human miseries and fragmentation of nation-states.

One may entertain and even notice reservations about what some call “neo-colonialism” from the East in the form of One Belt, One Road (OBOR) being pushed by President Xi Jinping. But OBOR could also work as a game changer by turning several contentious trajectories into stakeholders for peace through economic interdependence. With the Chinese financial, political and commercial involvements in Pakistan, Afghanistan and further up in Central Asia, one could foresee substantive improvements in infra structures besides assuring millions of jobs in a region confronted with an unprecedented youth bulge. The China-Pakistan Economic Corridor (CPEC), heavily focused on densely populated regions within the Indus Valley, and with Balochistan’s Gwadar being posited as a new and even more vibrant Dubai, plans to link China, Central Asia and Pakistan with the rest of the world certainly promise a gigantic project. 2018 has dawned amidst fears and hopes. On New Year’s eve, Dubai attracted record numbers of tourists—many amongst them from Muslim regions—and it has not been unusual to come across comments at social gatherings: “How come we do not have many more Dubais?” Or, “Dubai reveals that Muslims can relish and own modernity without fearing about their religion and traditional values”. Such laudatory quips reverberate similar observations heard across the Muslim world during the 1980s: “Why can’t Muslims have their own Japans?”