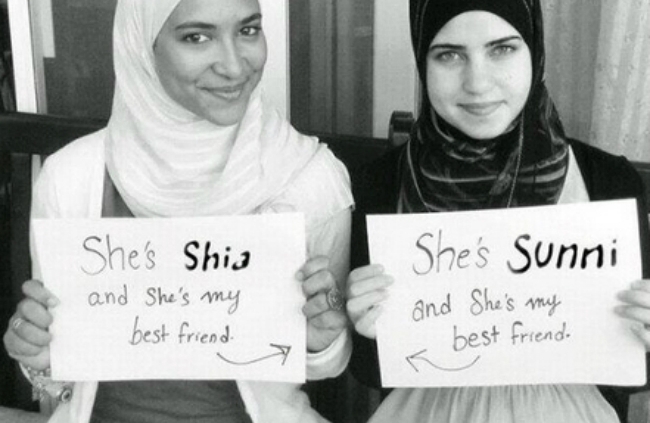 A friend bemusedly related to me his unexpected discovery that the Sunni and Shia global populations are drastically disproportionate. An intelligent and well-informed young man, his consumption of political news and current affairs had left him with the impression that the two sects of Islam were at least vaguely comparable in numbers. After all, the media’s reporting of the sectarian strife that has wreaked havoc across the Muslim world belies the fact that the overwhelming majority of Muslims self-identify as Sunni. It is only recently that an awareness of Islam’s sects has punctured a presiding notion that the world’s Muslims are one homogenous lump of absolutism. So far, so good, but can fragmentation become farcical?

Perhaps it can. You don’t have to stop at defining yourself as a Sunni or a Shia. Much like a Yes or No flow chart, there are a raft of subsequently smaller boxes you can put yourself in that narrow down your definition of what it means to be a Muslim. So, you’re not just a sunni Muslim, but a sunni Muslim who follows the deoband school of thought. Your neighbour is also a deobandi sunni Muslim but he is dead to you because he is a Tanzihi (as opposed to Takfiri) deobandi of the Amati branch whereas you are a Tanzihi deobandi of the Farhati branch. It is not unlike a proud born and bred Mancunian who finds himself working in London. He instantly bonds with the only other guy from Manchester in the office. They are delighted to find they went to the same school, frequented the same teenage hang-outs and both saw the Stone Roses play Manchester's International II in 1988. The bromance stutters to an abrupt halt, however, when his new-found buddy turns out to be a die-hard Manchester City fan while he eats, breathes and sleeps that once-upon-a-time-top-of-the-league team Manchester United.

Not unlike postcode gangs in inner city London, Islamic sects are as much about defining themselves against who doesn’t belong as who does. The deobandis, for example, seem overtly concerned with declaring the activities of the barelvis – reverence of saints and celebration of the Prophet’s birthday – as un-Islamic. Muslim internet forums are filled with bun-fights between followers of different religious scholars who rush to condemn difference of opinion, however marginal, or worse still the merest perceived slight on their irreproachable theological sage. This is not intellectual duelling or critical thinking but a dogmatic righteousness that is a race to call the other a kuffar (unbeliever).

Yet, we must be wary of branding sectarianism in Islam as wholly divisive. I often hear arguments asserting the importance of unity among the global ummah. Many see absolutism as the faith’s overriding strength. A single unwavering message so everyone knows where they stand on any particular issue. The presumption is that the only way forward is to abolish sects. But by working to this goal we deny that Muslims are a community of communities. The lauding of ‘unity’ in Islam is not only unrealistic but undesirable as we are all to greater or lesser degrees sectarian. The practice of Islam makes inevitable a level of interpretation. None of us can possess the entirety of the truth. Once we start defining boundaries and speaking in terms of our way as being the only right way the concept of sects is cast as the enemy of religion, which is to misunderstand the principles on which the faith was founded.

Sects more often than not originate as reformist movements seeking justice and social equity and are certainly not the monopoly of Islam, or even religion. Problems coincide with the stagnation of these ideals, usually when false limitations are imposed upon the very freedom to interpret, that these sects were borne out of. The result is the more sinister side of sectarianism – fundamentalism. Religion itself is rarely a reason that sects go awry. It is usually for pragmatic, social and political reasons that sectarianism becomes pernicious, when questions of power as a means to secure resources prevail do we see sects become lines of division. Human rights activists in Bahrain have accused rulers of fuelling sectarian tension in an effort to distract attention from calls across the sectarian divide for political freedom. In Iraq, the US saw sects as the most important lines of demarcation. This caused problems to be inflamed and although difficulties could never have been avoided, perhaps they need not have become so hideously and tragically intractable, manifesting in the horror we are witnessing today - Islamic State. External influences unsettled the natural means of finding equilibrium internally and the policy of labelling communities as either shia or sunni increased divisions in areas that had previously been mixed. All of a sudden people were being forced to identify as one or the other. Being Iraqi was not enough. Similarly the appalling violence in Syria was framed from the outset by Assad as a plot hatched by Salafi extremists hell-bent on destroying the country’s minority sects’ harmonious co-existence.

This is how sectarianism becomes a danger. Yet if we could learn to understand the virtue of the plurality of thought and to see it as a reflection of the consequential diversity of interpretation that must and should result, perhaps we can be reconciled to the concept of sects. Conversely, to see it as the enemy of religion is to misunderstand religion. Since people are multifarious surely heterogeneity of interpretation is inevitable and to be celebrated. The crucial test is how to arbitrate difference. We do this by embracing plurality. We must seek out the good in sectarianism if we are to embody plurality of thought and take personal responsibility in our interpretation and practice of faith.

Samia Rahman is Deputy Director of the Muslim Institute and Deputy Editor of Critical Muslim.