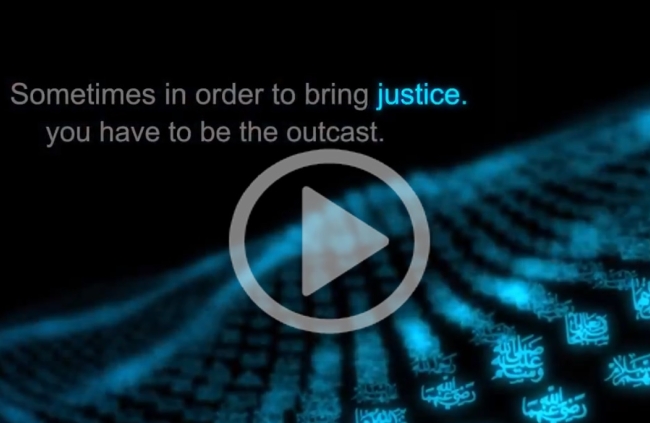 Be Notorious is a web series advocating for change in the Muslim world.

The root of the problem is the belief by some men and women, that a man has the right to beat his wife, while mothers groom their sons and daughters to believe that the status of women is below that of men.

Faris and I are two women in Los Angeles, we're Muslim and we're tired of people using religious text to justify hate, abuse and violence. We want an end to this @$#*. (We acknowledge that violence against women happen in ALL communities. Regardless, as Muslims we believe our responsibilities should be about cleaning up our own backyard).

Reinterpreting and debunking verse 4:34 of the Quran giving Muslim men permission to ‘beat’ their wife, and countering the pervasive belief that a woman’s virtue is measured by her obedience to the husband. Offering air-tight  proof  that a Muslim woman has the right to self-determination and that violence against her is not permissible under any circumstances.

FYI: The pressure to be obedient compels wives in some societies to engage in unprotected sex with their HIV/AIDS infected husbands knowing the health consequences. Can you imagine that?

It  has been almost a year since Faris and I started developing the concept, the trailer and the behind-the-scene videos. We have put in our own resources and especially time into this project. We know there are many of you out there who care and we rely on you to help us get the ball rolling with our first episode – Muslim Women's Rights.

Forget Safety. Live where you fear to live.

Malala Yousafzai - Pakistani girl shot because she wanted to go to school.
Rania Al-Baz - Saudi news anchor beaten repeatedly and savagely by her husband.
Muhktar Mai - "sentenced" to gang rape for an alleged offense by her brother.
Bibi Aisha - nose cut off by angry husband.  See project thumbnail.
Amina and Sarah Said - American teenagers shot and killed by father for having boyfriends.
Aasiya Zubair - American, killed by husband when she sued for divorce.
Fauziya Kasinga - African teenager who fled to the US to avoid FGM.

Other instances of neglect can be as subtle like an invisible cloak upon women, suffocating them into an oppressed position by default where:

These issues need to be address in an HONEST manner -  unappologetically, in order for change to happen as opposed to simply 'complaining' about the problem.

Yes, we can keep building women's shelters and schools for girls, keep writing and start endless petitions, pass laws even. Been there, done that. Nothing changes because we are only addressing symptoms and never getting to the root of the problem,  i.e. religious corruption.

Yes, many won't touch religion but look at our own American society and how religion is used to curtail our women's rights here in the name of Christianity.

It is no different in Muslim societies. So let's talk their "language". Like it or not Islam is the language most Muslims understand.

If you like to learn more, please visit this link.