Why Did the World Ignore Boko Haram's Baga Attacks?

As media coverage focused on the Paris terror attacks last week, more than 2000 Nigerians were reported to have been killed by Islamist militants. What makes one massacre more newsworthy than another? 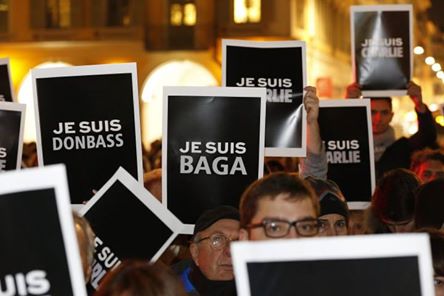 France spent the weekend coming to terms with last week’s terror attacks in Paristhat left 17 dead. The country mourned, and global leaders joined an estimated 3.7 million people on its streets to march in a show of unity.

In Nigeria, another crisis was unfolding, as reports came through of an estimated 2,000 casualties after an attack by Boko Haram militants on the town of Baga in the north-eastern state of Borno. Amnesty International described as the terror group’s “deadliest massacre” to date, and local defence groups said they had given up counting the bodies left lying on the streets.

Reporting in northern Nigeria is notoriously difficult; journalists have been targeted by Boko Haram, and, unlike in Paris, people on the ground are isolated and struggle with access to the internet and other communications. Attacks by Boko Haram have disrupted connections further, meaning that there is an absence of an online community able to share news, photos and video reports of news as it unfolds.

But reports of the massacre were coming through and as the world’s media focused its attention on Paris, some questioned why events in Nigeria were almost ignored.

“Mom Blogger” @Mom101 asked: “How is this not the lead story on every single news network, every Twitter newsfeed right now?” That sentiment was echoed by a number of Guardian readers over the weekend.

So why did the Paris attacks receive more coverage than the Boko Haram killings?

“I am Charlie, but I am Baga too,” wrote Simon Allison for the Daily Maverick, a partner on the Guardian Africa network. “There are massacres and there are massacres” he said, arguing that “it may be the 21st century, but African lives are still deemed less newsworthy – and, by implication, less valuable – than western lives”.

Allison recognises the challenges in reporting – “the nearest journalists are hundreds of kilometres away” – but also points to the significance of the attack: taking control of Baga, “Boko Haram effectively controls Borno state in its entirety. These aren’t just terrorists: they are becoming a de facto state.” Even more reason for the world to take notice.

But the blame does not just lie with western media; there was little African coverage either, said Allison. No leaders were condemning the attacks, nor did any talk of a solidarity movement, he said, adding that “our outrage and solidarity over the Paris massacre is also a symbol of how we as Africans neglect Africa’s own tragedies, and prioritise western lives over our own.”

Many pointed to the palpable silence of many of Nigeria’s politicians. Last week, Nigeria’s president, Goodluck Jonathan, expressed his condolences for the victims of France but stayed silent on the Boko Haram attacks on Baga.

Media analyst Ethan Zuckerman said that the president is “understandably wary of discussing Boko Haram, as it reminds voters that the conflict has erupted under his management and that his government has been unable to subdue the terror group”. Nigeria’s elections are set to take place on 14 February. The president was also criticised for celebrating his daughter Ine’s wedding over weekend, in the aftermath of the killings.

Elnathan John, a Nigerian writer and lawyer who has changed his Twitter identityto “I am Baga” in solidarity, shared a tweet from Nigeria’s finance minister, Ngozi Okonjo-Iweala, who also expressed condolences over the Paris attacks but made no mention of the events in Baga.

He also pointed to comments on the official Twitter account of Ahmadu Adamu Muazu, from the ruling People’s Democratic party, who looked to downplay the death toll: “We know it’s a political period so some of this [sic] things are expected”.

Muazu has since taken to the account again to say he has been working with the security services to ensure that “peace will soon be restored” to the people in Baga and other regions in the north-east of the country.

‘The west is ignoring Boko Haram’

Ignatius Kaigama, the Catholic archbishop of Jos in central Nigeria – an area which has also suffered terror attacks – added his voice to criticism of the west.

Speaking to the BBC, he argued that Nigeria could not confront the threat from Boko Haram alone. “It is a monumental tragedy. It has saddened all of Nigeria. But... we seem to be helpless,” he said. “Because if we could stop Boko Haram, we would have done it right away. But they continue to attack, and kill and capture territories... with such impunity.”

Over the weekend Boko Haram was also blamed for a suicide attack in a market in Borno state that left 16 dead in Yobe state. Kaigama called the for international community to show the same spirit and resolve against Boko Haram as it had done after the attacks in France.

Echoing the #bringbackourgirls hashtag, which was set up to call for the release of the 200 schoolgirls kidnapped by Boko Haram in April, some have taken to social media to show their support for the people in Baga.

Using a number of hashtags including #BagaTogether, #weareallbaga and #pray4baga, Nigerians and others have posted their support for the affected area. Some objected to disputes over the total death toll, yet to be confirmed, getting in the way of the real issues, some objected to the scant media coverage, others simply called for solidarity.