Uzbekistan Revisited: Negotiating through Challenges and Opportunities on the Silk Route 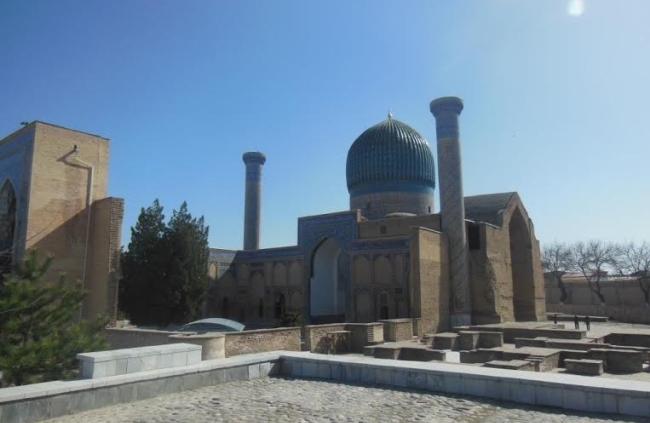 Last August, I had taken a handful of pictures of Tamerlane’s resting place in Samarkand in Uzbekistan’s second biggest and one of the world’s oldest cities and felt assured of their quality after leaving the site. Tamerlane (d. 1405) is, in fact, Emir Temur for Uzbeks, who has been rehabilitated as this young country’s father figure as is Chengiz Khan (d. 1227) for a newly independent Mongolia. For outsiders and especially those who suffered his intermittent atrocities in Iran, South Asia and the Middle East, he was known as Taimur, the Lame, or Taimur Lang, who had lost a leg—and possibly a few other limbs—while waging several battles across Asia. My personal visit to Uzbekistan had proved to be a memorable journey through history over the Silk Route since I preferred to reside in the historic districts in Samarkand, Tashkent and Bukhara often walking endlessly across the old localities (mohallas) which had resiliently outlived the Mongol wrath and periodic earthquakes. These noble structures of older seminaries, mosques, minarets, synagogues and forts all dated from post-1230 era when Muslim Central Asia once again rose to its previous intellectual and artistic grandeur and Tamerlane took it to the newer heights. Subsequently, despite intermittent civil wars, Shaibani Uzbek dynasty ensured its cultural and architectural pre-eminence all the way until the nineteenth century when Russians moved in from the north, and by the early twentieth century, had occupied the entire Transoxiana whereas the British pursued hot and cold geo-politics south of the Oxus. The Central Asians, all the way from present-day Kazakhstan to Crimea’s Tatars and Caucuses’s Muslims, while faced with the momentous change, resisted the October Revolution, yet one by one, they were defeated. Lenin, Stalin, Khrushchev and Brezhnev were the new Temurs who, like the erstwhile Tsars, ensured closer integration of these vast regions into the Soviet Union. However, the post-Second Wold War West, entrapped by the real but largely exaggerated threats from ‘the East’ banked on some turbulence in USSR’s ‘soft belly’, which, as per such expectations may even cause the Soviet implosion. Looking at post-1989 dismemberment of Moscow’s empire, perhaps the Western pundits were not totally wrong though this reversal had begun in Afghanistan. When the last Soviet tanks crossed the old bridge on the Oxus (Amu Darya) into Termez in 1989, very few including Brzezinski, could foretell unfolding of the USSR.

In his total annihilation of Bukhara like other cities falling before his wrath, Chengiz Khan in 1220 had exempted City’s Kalon Minaret for a curious reason. While looking towards the top end of Asia’s tallest, cylindrical and symmetrically slim minaret built of yellow bricks, Khan’s Mongol hat had fallen off and in his rare moments of glee, he forbade its demolition. The rest of Bukhara built by the Samanids and Karakhanids, more like Samarkand, Balkh, Kabul and the rest, was turned into rubble. I had spent days browsing inside Bukharan seminaries where Imam Bukhari, Roudaki, Avicenna, Khwarizmi, Al-Beruni and several other luminaries of the classical Islamic era had studied and debated scholarly subjects. This was the Oxbridge of the Islamic world where once scholarly and mystical pursuits flourished giving new energies to Islamic civilisation at a time when Arabs and Persians had almost exhausted themselves.  While nourishing myself on juiciest watermelons and luscious grapes, fortified by round Uzbek bread and seekh kabobs, I would venture into one of the oldest Jewish neighbourhoods where once thousands of Jews lived and wrote Persian in Hebrew script. Many of them moved to Samarkand, which, as per one account, had seventeen thriving synagogues, neighboured by mosques and Sufi zaawiyyas. Such an acculturated and equally visible Jewish communities shocked later Jews coming in from Europe during the nineteenth century who saw their coreligionists at ease with their Muslim neighbours while staying faithful to their cherished language—Bukharan.

During that summer of 2015, I often smiled in nostalgia when I would see Uzbek men and women raising their hands in prayers at the tomb of the famous Sufi, Bahauddin Naqshband (d. 1389), buried just outside Bukhara. A turbaned mullah would lead them in prayers as men and women will close their eyes while reciting the Quranic verses followed by prayers in Tajik/Persian. They will leave some money for the mullah, and women with scarved heads even if they wore skirts, would file out of the shrine to visit an old olive tree. This ancient tree, just by the water tank (hauz), is believed to have some special spiritual status, since the pilgrims would walk underneath its fallen trunk while squeezing their bodies through a narrow opening. I would also look at the huge cooking wok (Daig) that once was used to cook mounds of pilau for pilgrims and now was a part of the Naqshband Musuem. Outside, while meticulously avoiding manicured green lawns, the visiting families would sit down to munch on Uzbek naans and samosas and am sure would have offered me as well in case I had joined them.

Back in Oxford and before my teaching assignment at the University of Peloponnese in Greece, I somehow lost the pictures of the graves of Tamerlane and his illustrious grandson, Ulugh Baig, and felt a bit sad. My daughter, Sidra, reassured me by saying: “Never mind Abu! You never know, you may go back to Samarkand and take many more pictures”. I laughed it off then and forgot about it until in late January my university per chance nominated me to join an EU delegation of academics to study Uzbek educational system. And the visit led me back from Tashkent to Samarkand, and on urging by fellow European and Uzbek colleagues, even resulted into an impromptu lecture on Central Asia, the Mongols and Tamerlane. I went inside the mausoleum and took a few pictures of the graves though this time I did not see any pilgrims and smiled remembering how true Sidra had been!

Of course, present-day land-locked Uzbekistan accounts for a major section of Central Asia, which has been historically called Turkestan, and is centrally located on the Silk Route, whose two parallel pathways, in fact, converged here in Samarkand. Its territorial boundaries varied at different times all the way from the imperial past to more recent national reincarnation though not all its people are ethnically Uzbek. Its western parts remind one of their affinities with Persia, Afghanistan and Pakistan whereas the buildings and boulevards dating from the Russian and Soviet era visibly dominate the cities. In the decades since independence, the government has been engaged in the conservation and preservation of its unprecedented heritage though is confronted with several serious financial constraints. On the one hand, the country has a visible women’s participation in national life and unique level of tolerance for the various life-styles, concurrently, it needs more skilled people for its growing market based economy. The erstwhile single factor dependence on cotton production has already depleted its limited water resources and the Amu and Sir along with Aral Sea look like beleaguered vestiges of their former spans. Soil has suffered both from desertification and unhealthy injections of otherwise harmful chemicals to enhance cotton production. A high rate of literacy and a major proportion of youthful population willing to work along with a visible presence of infra structure and most of all—an unprecedented level of peace across the country despite turbulence further south and east—offer several positive indicators. No wonder, in this country of 31 million people, one notices an annual GDP growth rate of 8 per cent with 45% of it accounting for service sector. Uzbeks, like their other Muslim and Mediterranean counterparts, enjoy sociability over food and through elaborate marriage and musical events. It is a country that takes great pride in its past poets such as Mir Ali Sher Navoi (d. 1501), who preferred classical Turkish to Persian, and celebrates liberal writers such as the Mughal Emperor Zaheerud Din Babur (d. 1530). One does not notice any bleak poverty, urban congestion, rubbish dumps, or drug addiction in the country though ‘old guards’ rule it authoritatively. Perhaps with universal education, a more vocal civil society, greater women’s participation, investments from China and elsewhere along with peace in Afghanistan, Central Asia may once again link itself with Southern and West Asia. The current Russo-Turkish tensions do not help Turkic nations in Central Asia since a vigilant Moscow retains an almost unilateral hold but given the past resilience, high rate of literacy and a continued economic progress, Uzbekistan may rise once again as an economic and cultural hub in the cradle of the world’s history.