The Past That Claims the Future

These days, when it is summer in the light and winter in the shade, I have had an opportunity to explore the wealth of our heritage. Kashmir, besides being known as a war-torn territory shrouded in the magnificence of nature, is also renowned as the abode of great saints and Sufis, witness to people of different faiths living together. 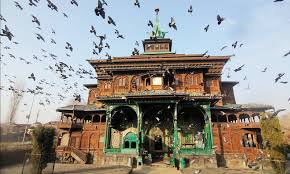 Many members of the Hindu communities fled their homes due to the conflict; but how can one ever completely abandon his or her identity? Shrines are pervasive across our region, which is why Kashmir is often called Pir Waer (the alcove of saints). We visit these revered places when we go on an expedition, generally once, twice or three times a year, but in truth even we, Kashmiris, in general, do not know our homeland well. For locals as well as visitors, there is so much to explore.

The flowing-together of numerous religious beliefs such as Buddhism, Shaivism and Islam since the 13th century has led Kashmir to become home to various Sufi cultures. Different faiths, or should I say conquerors, have left us their legacies. We have a history of Kashmiriyat – a syncretic Kashmir where humanity as a religion subjugated every other faith.

As the sun shone hot and the wind blew cold,I set out on a journey through the Old City Srinagar to see the Sufi shrine of one of the first preachers of Islam in the Valley, Mir Syed Ali Hamdani, who in the 13th century arrived from the city of Hamadan, Persia. After preaching Islam here for many years he left for Central Asia. The shrine, located on the banks of the river Jhelum, is popularly known as Khanqah-e-Maula, one of the oldest Muslim sacred sites in Kashmir and the first mosque built in Srinagar.

A local guide informed us that the mosque was first built by Sultan Sikandar Shah Miri better known as Sikandar Butshikan in the first half of the last decade of the 14th century, with the help of skilled artisans laboured from Iran. It was mesmerising to watch the aesthetics of richly carved, wooden structures; the presence of devotees; a crowd of local people praying, both men and women; with some tourists taking photographs and wandering about its architectural structure and wood carving; the gatherings of pigeons surrounding the front yard and the distribution of Tehr (rice cooked with turmeric) to everyone present, young and old, by a local woman. A truly peaceful scene.

We then had a casual stroll through the lanes of the archaic wholesale market, where one is lost in all kinds of stuffs associated with the rich tradition and identity of Kashmir, through which one reaches the mausoleum of King Zain-ul-Abideen’s mother, famously known as Budshah Tomb. The tomb was built by Sultan Zain-ul-Abidin (1421 AD – 1474 AD), who was known to be an exceptionally peaceful ruler, and was conferred the title of Budshah (The Great King). Spiritually enlightened and highly reputed, he was responsible for the restructuring of the architecture of Kashmir.

Earlier we visited shrines and temples in South Kashmir. Boarding a taxi early in the morning we attempted, but failed, to escape the traffic-jam, exacerbated by an army convoy. We soon heard that there had been an encounter somewhere in South Kashmir, which was why the Army vehicles were marching in a hurry and traffic was being diverted to let them pass.

We ventured from the Shrine of Syed Hassan Mantaqui, a Sufi shrine on the Srinagar Awantipora highway, to the pilgrim site of the Shiva temple called Avanti Shovra. We also visited the shrine of Shah Hamdani in Tral, a place that was the source of unrest in previous years. We visited a preserved temple in the village Payar in Pulwama, before we returned. Many devotees and travellers visit these shrines and temples; we met one couple from Mumbai in Avanti Shovra, who were pleased to see that place.

Hazratbal Shrine, Charar-e-Sharief shrine, and the shrine of Makhdoom Sahib are also highlights for tourists to Kashmir. Temples like Martand Sun Temple, Shankarachraya Temple, Kheer Bhawani are famous Hindu legacies. Chatti Padshahi Srinagar is a renowned religious site for Sikh communities. These places have a special significance in the hearts of countless followers, not only in the State but across the country.

My identity was strengthened by experiencing these shrines and monuments that claim a glorious past of grandeur, power and riches beyond my imagination. Attending the two-day workshop on Tourism, Nature, Culture, Architecture, Urban Development and the Arts added more to my feelings of pride.

I feel that the discourse of freedom should focus on reviving our past and our identity. The significance of our glorious past, our character, awaits to be inculcated in us. Herein lies the anatomy of loss, of which the new generation is not fully aware.

Muddasir Ramzan was born in 1990 in Kashmir, India, where he resides. He studied English Literature and is a budding writer. His writings have been published in various national and international journals in India, Pakistan and the UK and he regularly writes blogs for the Muslim Institute. He can be contacted at muddasirramzan[at]gmail[dot]com.