The Pakistani Origins of the Israeli State 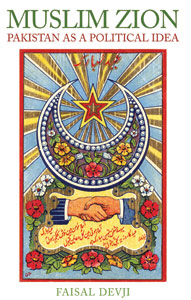 "Pakistan is like Israel, an ideological state," said then Pakistani President Zia ul-Haq in 1981. "Take out the Judaism from Israel and it will fall like a house of cards. Take Islam out of Pakistan and make it a secular state; it would collapse."

It's a strange thing to think about now. Pakistan and Israel are, on the face of it, not kindred spirits. There are no formal diplomatic relations between the two countries-- Pakistan, like many other Muslim-majority states, does not recognize Israel's existence. Israel, meanwhile, has in recent years been cozying up to India, Pakistan's archrival across the border. Pakistani conspiracy theorists routinely hurl invective at the combined plots of RAW, India's top intelligence agency, and the Mossad.

But Zia, an instrumental figure in the Islamization of Pakistani society, was saying something quite obvious: Pakistan and Israel are historical twins.

They emerged as independent states one after the other -- Pakistan in 1947, Israel in 1948 -- following the retreat of the British empire. They were born in blood: Pakistan in the grisly Partition that cleaved British India in two, Israel in the battles of the 1948 Arab-Israeli war. And ideologically, as Zia noted, they were both states whose raison d'etre was religion, or at least religious identity.

Pakistan was dreamed up as a haven for Indian Muslims, a state that transcended geography itself with a western and eastern wing suspended in between thousands of miles of India. (It should be noted that India's secular founding founders never saw their own state as a "Hindu" nation, and that for decades thereafter, there were more Muslims living in India than in Pakistan.)

Israel was the product of decades of Zionist activism, brought into being after the horrors of the Holocaust as a homeland for Europe's tormented Jewry. Even this cause had an echo in South Asia. Pakistan's founding father Mohammad Ali Jinnah was well-versed in the Zionist plight, since he too wanted to make a nation out of a religious community.

As the Oxford historian Faisal Devji writes in his book "Muslim Zion: Pakistan as a Political Idea," Jinnah "seems to have possessed more books on the problems of European Jewry than on any Muslim people or country." That's not too surprising, given that Jinnah was not particularly religious and envisioned a Pakistani nation that, while defined by Islam, was not necessarily governed by its laws. A similar secular theme ran through the Israeli state.

More tellingly, Pakistan made a direct impression on Israel's rulers in the first years of the country's existence.

In a Haaretz article excerpting work from a new book on Israel and the question of apartheid, South African-born author Benjamin Pogrund explored how Israel followed Pakistan's lead when it came to administering lands and property captured from the Palestinians who had lived there before. Pogrund writes of the challenge that faced David Ben-Gurion, Israel's first prime minister, in 1948:

In the government debates to decide what to do with the Arab "abandoned property," the prime minister’s special adviser on land and border demarcation, Zalman Lifshitz, argued for the permanent use of refugee property for the political and economic benefit of the new state. He said that countries in similar situations, such as Turkey, Greece, Bulgaria and Czechoslovakia, had taken on vast powers to liquidate refugee property for state use and he urged the Israeli government "to proceed in a similar manner" as "there is no shortage of precedents."

The laws Lifshitz got enacted in 1949, Pogrund writes, were "based squarely" on Pakistani precedent. During Partition, millions of Hindus and Sikhs had fled what became Pakistan, leaving behind property and assets that could be appropriated on behalf of the millions of Muslim refugees streaming in from the other side of the border. For Lifshitz, Pogrund explains, a similar solution made sense for Israel's Jewish arrivals.

It cannot be said if Lifshitz was aware of the irony of the new Jewish state using the legal techniques of a new Muslim state to deprive its own mainly Muslim refugees of their properties. Whichever, he proposed "a new law, similar to the… Pakistani regulations and based on the principles they contain." Pakistani lawmakers, he noted, had drawn on Britain’s Trading with the Enemy Act, but had also introduced new elements to assist expropriation and transfer of ownership: they had created a mechanism for seizing Hindu and Sikh refugee property in Pakistan and its reallocation for the settlement of Muslim refugees from India.

This curious irony could be chalked off as a quirk of history. But both Israel and Pakistan are still grappling with their fragile ideological identities to this day.

Jinnah's dream has so far proved illusory: in 1971, East Pakistan split away following a brutal revolutionary war and became the independent state of Bangladesh. Ethnic and linguistic nationalism trumped a pan-Islamic identity. Subsequent Pakistani governments have both encouraged rampant Islamism and then struggled to contain its extremist, militant off-shoots.

In Israel, the question of how to reconcile with the Arabs on its borders and in its midst remains as potent and vexing now as it did more than half a century ago. As WorldViews has written about before, the right-wing government of current Israeli Prime Minister Benjamin Netanyahu has shown little will to enable the creation of a viable Palestinian state. Some of Netanyahu's allies have specifically ruled it out.

And Netanyahu himself is attempting to push through a controversial law that would cement Israel's status as a "Jewish nation-state," privileging the collective rights of Israeli Jews over the interests of Israeli minorities. It's a proposal that plays well among Israel's right-wing, including communities of settlers living in the West Bank.

But it has its critics, too. "Israelis not in the thrall of settler fanaticism need to decide whether they want to be part of the democratic Western world or not," wrote Israeli intellectual Bernard Avishai in the New Yorker this week. He then offered this tidy comparison: "The Jewish nation-state law puts the choice starkly: a globalist Hebrew republic or a little Jewish Pakistan."

Ishaan Tharoor writes about foreign affairs for The Washington Post. He previously was a senior editor at TIME, based first in Hong Kong and later in New York.