All that I have described in my earlier writings - Part I and II - created a very weak and unstable Pakistan. The events inevitably led to her intellectual degeneration, growth of minnow politicians, spread of religious fundamentalism and a general sense of hopelessness. The country is surviving and will do so for a long time. This is the way Pakistan is now. But is that the way Pakistan wants to stay – merely surviving? Surely it is not.

But what is happening in Pakistan today? Mindless terrorists, thwarted in their attempts to carry out heinous activities either in India or other countries have now been engaged in killing their own people. Daily, we see killings of Pakistani people: Shia pilgrims, aid workers, military or police officers, or innocent and helpless youngsters seeking education. It is almost as if these mindless criminals joined the CIA drones in making this unfortunate country a killing field. The civilian or military authorities seem to be indifferent or helpless to do anything.

The problems plaguing Pakistan are so complex that I fear they will haunt or bedevil her people for generations to come. Yet her fundamental weaknesses can be traced to three phenomenons:

Pakistan certainly has ample human and natural resources which are either under-utilised or poorly utilised; Yet an inspired leadership could revolutionise Pakistan’s outlook if it were to maximize the potential of its environment. Pakistan has magnificent hills and mountains and terrains, idyllic rivers fertilizing her lands, ancient and medieval sites of historical importance, and people of diverse ethnicities possessing many ingenuities and skills; all these are waiting to be harnessed by leaders of vision, capable of instilling a sense of nationhood and pride with the foresight to maintain cordial relations with neighbouring countries of differing ideologies by applying astute diplomacy of the highest order.

Modernisation of Industries and other Necessary Reforms

The extent of Pakistan’s failure to moderrnise her industries can be illustrated by looking at the fate of those countries which became independent at the same time or later than Pakistan. South Korea, Malaysia, Indonesia, Thailand, and even Vietnam shattered by twenty years’ war with America, have made tremendous economic progress. The people of Pakistan must wonder why they failed to do so. Entrepreneurial activity should be encouraged by tackling red-tape and bribery. Work must begin to eradicate tax avoidance and evasions so that increased revenue is available to the government for developmental work. Long-awaited land reform should begin as soon as possible so that agricultural income is channeled for the benefit of the tillers and thus improving rural poverty. Many other aspects such as corruption, religious fundamentalism, and the restoration of confidence also need to be looked into. These cannot be effectively done unless the fundamental problems are solved.

To attain the status of a successful important country requires a complete rethinking of all Pakistan’s policies. It also means that there are many bitter pills to swallow. These are:

I believe Pakistan can overcome the difficulties that compound her suffering. If this beautiful country can change her outlook and turn her attention from West to the East, the population will see everything quite differently, as if their blinded vision has suddenly seen light. Materially Pakistan will benefit more. India will be at peace when she will find a stable friendly neighbour.

In the past the all powerful army as big brother was ever-present behind the scenes, holding back civilian governments. The military involved itself at almost at every stage of Pakistan’s politics, and at every opportunity, by dismantling civilian governments, intervening in civic affairs and imposing martial law. It is not beyond the realms of fantasy to expect a cessation of military meddling will allow a democratic government to flourish. 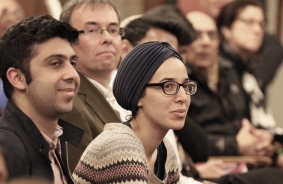