The Harmonious Interweaving of Different Languages 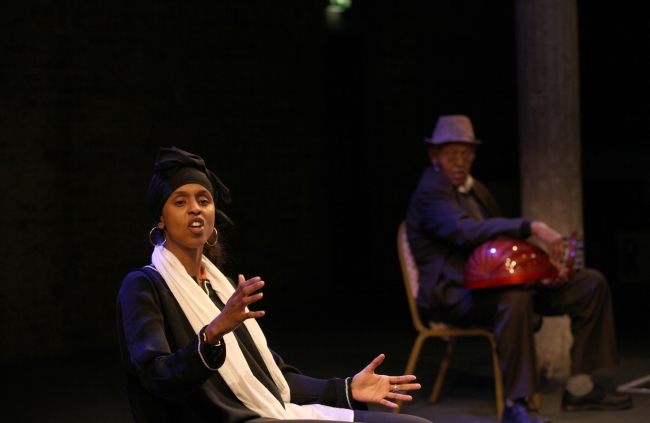 The Crows Plucked Your Sinews  is a one woman play “about Somalis in Britain and Britain in Somalia”. The piece – written and directed by Hassan Mahamdallie, director of the Muslim Institute, with the assistance of Jamil Dhillon – explores colonialism and empire, politics, and ‘culture and tradition’ through the eyes of young British-Somali – Suuban – played by Manchester-based actress Yusra Warsama.

The hypnotic performance begins at the burial of Suuban’s alzheimer-stricken grandmother. From the opening scene we are immersed in a time-warped journey through a desolate war-engaged Somalia, and a grimy modern-day South London. A plethora of themes are explored in the hour-long performance; we meet Suuban’s great-grandmother a great fearless woman warrior. We discover the letters from the mother of the dead English Tommy warning her young son of the “men in the bushes”.

We are inundated with the names and titles of Somali scholars living in exile who have become self-proclaimed ‘experts’ on ‘the war’ – leaving no room for womens’ or non-middle class voices.

Using a man and a guitar, a talented British -Somali actress, and a simple set design directors Mahamdallie and Dhillon gracefully present us with multiple complex narratives through the oldest form of story-telling – the spoken word.

Suuban tells us of the times during the war when men used to pass on secret messages through poetry. The play itself can be described as an ‘epic poem’. Were I not so engrossed in the rhythmic dance of Suuban’s loose plaits I would have taken out my notepad to jot down the many gems that were dished out throughout the play.

The piece explores many important, and often, overlooked themes such as racial-profiling, and racism and violence from working class English folk. For me, however, the greatest delight came from the capturing of the mundane. The many conversations of Suuban’s mother to relatives in Amsterdam and Kenya in an attempt to find a passport for her brother to flee the country, ‘Our sons are similar in age, we all look the same to them anyway”.

The description of the cramped house filled with exquisite furniture that clearly belongs in a compound in a lavish part of Mogadishu rather than a council estate in Woolwhich. The twirling of the fag; the description of grandma in a box room in the attic. The development of the relationship between Suuban and her grandmother, which goes from precarious to almost over-protective solidarity between the two women – these for me are the nuances that can only be captured when a work is written by someone with lived experience and/or great consideration for capturing the ‘realness’ and complexities of other cultures. The bigger themes are what we see on the news and history books – albeit at times skewed – but these everyday vignettes are really what makes the play a work of ‘art.’

The harmonious interweaving of Somali and English dialogue – an everyday reality for us third culture kids who are so often made to choose a ‘side’ (personally I claim them all) – was another highlight.

I commend the directors’ decision to not translate all of the Somali dialogue. This decision allowed the young Somali men and women in the audience to connect with the piece in a way the rest of us non-Somalis could not.

This connection is something that I’d like to see more of in British theatre. But it can only be achieved by having diverse audiences, which is a direct result of having a diverse cast. Had there been only a single Somali person in the audience I doubt they would’ve felt as comfortable giggling at the parts we did not understand.

The icing on the cake, as it were, was the visuals that were dropped in during the performance. The images of Barack Obama’s speech after the death of Bin Laden, and the echoes of the words “no Americans were harmed” created chills and unsuspected tension thanks to the brilliance of film-maker Adam Radolinski. Visual artist Rachel Gadsden’s stunning portraits further added to the themes of war and displacement underpinning the play.

History told, and retold through digital art and the spoken word – is this the future of British Theatre? I hope so.

The play is currently touring the UK:

Christina aka CongoMuse is a poet, writer, and director. She explores various themes ranging from mental health-related issues, religion, sexuality, to the everyday and the mundane; based on her own experiences. Christina has completed residencies with Royal Exchange Theatre, Home, and Community Arts North West and is currently doing a residency at Commonword Cultureword through their Women in the Spotlight programme.