Gaza is a Crime Made in Washington as well as Jerusalem 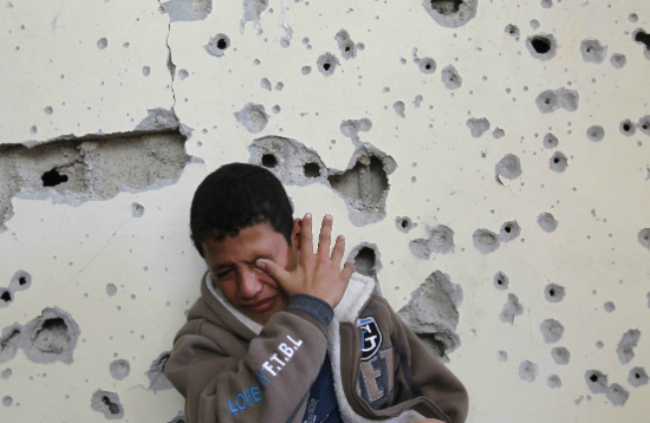 Global revulsion at the mind-numbing carnage of Israel’s onslaught on Gaza seems finally to have spurred some of the western political class to speak out. The resignation of Sayeeda Warsi, Britain’s first Muslim cabinet minister, in protest against her government’s “morally indefensible” stance, emboldened Nick Clegg, the deputy prime minister, to demand the suspension of arms export licences to Israel.

Last week it was Ed Miliband who condemned Israel’s invasion and the prime minister’s “silence on the killing of innocent Palestinian civilians”. Even the United States administration denounced its strategic protege’s “disgraceful” bombardment of a school, while Barack Obama described Palestinian suffering as “ heartbreaking” – as if he had nothing to do with it.

Now that Israelis and Palestinians have arrived in Cairo to turn the ceasefire into something more long-lasting, perhaps it feels safer to take a stand. But a month of indiscriminate brutality in which 1,875 Palestinians and 67 Israelis have been killed is still presented, grotesquely, as a war of Israeli self-defence – rather than as a decades-long confrontation between occupier and occupied, in which western governments stand resolutely on the side of the occupier.

And while the overwhelming majority of Palestinian dead are civilians – 430 of them children – and 64 of the Israeli dead are soldiers, it is Hamas that is branded terrorist, rather than the Israeli armed forces armed with the most sophisticated targeting technology in the world.

It’s only necessary to consider for a moment what the reaction would have been if the death toll had been the other way round to realise how loaded are the scales of western moral outrage and selective the appetite for action. And it’s only by ignoring the entire history of the conflict that it can be portrayed as the result of some wearisome ancient ethnic hatred.

This week’s centenary of the outbreak of the first world war should help. David Cameron claims it was fought for freedom. In reality, it was a savage industrial slaughter perpetrated by a gang of imperial powers to carve up territories, markets and resources.

Far from defending democracy or the rights of small nations, Britain and France ended the war divvying up the defeated German and Ottoman empires between them, from Iraq to Palestine. A century on, we’re still living with the consequences.

In my own family, both my grandmothers lost brothers in the 1914-18 war. One was George Mackay Clark, who fought with the Royal Scots in Gallipoli and the campaign to conquer Palestine. He was killed in November 1917, just outside Gaza.

Ten days earlier, a British foreign secretary had signed the Balfour declaration, which on behalf of one people promised to a second the land of a third. Palestine would be a “home for the Jewish people” provided that nothing would prejudice the rights of the “existing non-Jewish communities”, as the Palestinians were described.

So began its full-scale colonisation by mainly European settlers – something that could have happened only under colonial rule – which three decades later would lead to the establishment of Israel and the dispossession or expulsion of the majority of the Palestinian people.

Four Arab-Israeli wars on, the 44% of Palestine allocated to the Palestinian majority under the 1947 UN partition plan had been entirely occupied by Israel – and the Palestinians were fighting a guerrilla war for self-determination and the refugees’ right of return.

The other day I came across a copy of Newsweek magazine from March 1978, with a picture of an Israeli tank on the cover under the headline “Israel strikes back”. Then it was south Lebanon that Israel was punishing, not Gaza – and the “terrorists” of Yasser Arafat’s Palestine Liberation Organisation, not Hamas, that its forces were targeting.

Israel staged an even larger-scale invasion of Lebanon in 1982 and occupied the south for another 18 years. Since the Oslo agreement of the early 1990s failed to produce the Palestinian state in the West Bank and Gaza it was supposed to, Israel has colonised, bombed and reinvaded the Palestinian territories it illegally occupies (along with Syria and Lebanon) time and again: in 2002, 2006, 2008 and 2012.

The justification is always the same: the security of the occupier must be upheld against the resistance of the occupied and blockaded population. And at every stage Israel has had the military, financial and diplomatic support of the west, the US above all.

Despite the hand-wringing, that backing has been unwavering throughout the past month’s devastation of Gaza. Not only is Israel’s right of “self-defence” in a territory it illegally controls upheld, while the same right is denied to the Palestinians, but the US, whose military aid to Israel runs to $3bn a year, has been re-supplying it with weapons as its troops and aircraft pulverised and massacred their way through an impoverished territory from which its captive people are unable to escape.

Europe is in the same game. Britain has licensed the sale of a startling £8bn worth of military or dual-use equipment since 2010, and £42m of direct arms sales – including parts for drones and tanks used in the destruction of Gaza.

But a month on, Israel has failed to achieve its objectives. It has “mown the lawn”, as Israel’s military likes to describe its campaigns of destruction and bloodletting. But Hamas has been strengthened by its defiance and military performance; its rate of rocket fire was barely reduced by Israel’s attacks; and the united front with other Palestinian groups Israel is so keen to destroy has been shored up by the campaign.

If the Palestinians are going to break out of their current subjection, that will have to go further. For the rest of the world it’s the outrageous big-power backing for Israel’s 47-year illegal occupation, colonisation and denial of Palestinian rights – while orchestrating an endless phoney peace process that simply allows the land grab to continue – that has to be challenged and dismantled.

Global public opinion has shifted decisively in favour of justice for the Palestinians. What’s needed is to turn that into unrelenting pressure for an end to support for occupation, an arms embargo and sanctions, from above and below. The horror of Gaza is a crime made in Washington and London, as well as Jerusalem.

Seumas Milne is a Guardian columnist and associate editor. He was the Guardian's comment editor from 2001 to 2007 after working for the paper as a general reporter and labour editor. He has reported for the Guardian from the Middle East, eastern Europe, Russia, south Asia and Latin America. He previously worked for the Economist and is the author of The Enemy Within and The Revenge of History and co-author of Beyond the Casino Economy. Twitter: @SeumasMilne

This article first appeared in the Guardian