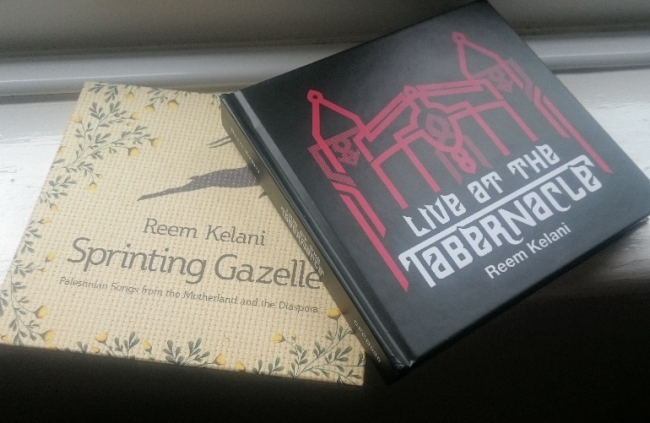 At her concerts, I learnt that music is an integral part of Palestinian identity. Many a Palestinian lullaby, for example, contain these haunting lines:

“Do tell our loved ones who’ve moved away/That for anyone, hardship never lasts forever/Never lasts forever”, which listeners can savour in Kelani’s mesmerising arrangement of “Tahlileh Jaliliyyeh” (“Galilean Lullaby”).

I was also ecstatic when I first heard her “Il-Hamdillah” (“Giving Praise”), a rhythmic, trance-inducing zikr or chanted remembrance of Allah.

These and other scintillating tracks can be found on Kelani’s debut album, Sprinting Gazelle, released in 2005. And Kelani has done us a favour by following this with her sophomore effort, Live at the Tabernacle (2016). This double CD is a feast for the senses, containing several tracks from her debut and also some fresh numbers, such as the witty and caustic Egyptian anti-colonial song “Lahn el-Fuqahaa’/Shaykh Quffaa’a” (“The Preachers’ Anthem”).

The live album is no substitute for actually being at a Kelani concert but it is a chance to appreciate her musicianship alongside her impressive band, comprising musicians from the UK, US, Palestine and Italy. Their skill and chemistry are palpable and their interpretation of each track ranges from muscular to melancholy, perfectly matching Kelani’s intense and gorgeous voice.

Listening to Kelani on Spotify is certainly an option but it diminishes the lushness of owning her intricately crafted CDs. Apart from the informative notes introducing each song, the visual design is also integral for the appreciation of Kelani’s artistic vision – from the Nasta’liq calligraphy of Sprinting Gazelle to the Kufic calligraphy of Live at the Tabernacle.

And Kelani is not only political – she’s hilarious to boot. She introduces “Ah! Ya Reem al-Ghuzlaan” (“Sprinting Gazelle”) by telling the audience that the song was taught to her by a Palestinian Big Mama who, upon learning her name (“reem” is Arabic for “addax/white antelope” but can generically refer to a gazelle), recited these sombre verses:

“O gazelle of all gazelles/You, who plan to go away/As you set out on your journey/Offer your praise to the Prophet.

“My eyes flooded with tears/I cried over our parting/Crying over our partying/I’ve taken a vow of silence/I’ve forbidden myself to dance the dabkeh/I’ve dyed my clothes dark and gone into mourning.”

At which point Kelani asked the Palestinian Big Mama, “When do you sing this song, mama?” Big Mama replied, “We’re Palestinian, why of course – at weddings!”

Live at the Tabernacle is a gift because it is proof that Kelani is not only a consummate activist and musician, she’s also impeccable whether in a studio or in front of a live audience.