The Culture of Kashmir will Survive 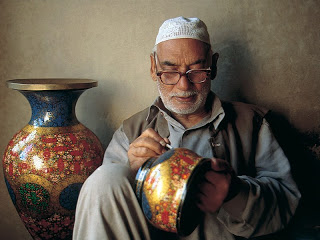 Cradled in the lap of the majestic Himalayan mountains, the Kashmir valley, along with its scenic beauty, is also famous for its rich culture. Despite the religious divide between Muslims, Hindus, Sikhs and Christians, the inhabitants are primarily homogeneous. Their co-existence symbolises Kashmir as a melting pot of multiple communities adding colour and fragrance to their existence based on humanism, secularism and tolerance, peace and coexistence.

The vibrant culture and tradition of Kashmir is represented by its prepossessing people. They are widely considered to be hospitable, God fearing and humble. Their native tongue, Kashmiri, is pivotal to their cultural identity. This vernacular has a unique position among the Modern Indo-Aryan Languages: it is the only Indian language that belongs to the Dardic group of Central Asian Languages. Kashmiri is a beautiful and multi-layered system of expression; having borrowed and assimilated words from a myriad of other dialects rendering its vocabulary profoundly opulent. Kashmiri Literature has a pride of place in Indian letters, preserving its political, economic and linguistic patterns.

Handicrafts are the traditional occupation of the people of Kashmir and there are many buildings of significant architectural heritage. Carpets, shawls and other delicate and intricate tapestry have earned the region’s craftsmen international renown. Wood carvings and ceilings are coveted for their aesthetic appeal while embroidery and papier mâché are internationally famed. Papier mâché best reflects the cultural whirl of influences of the Central Asian designs and motifs. Exquisitely decorated traditional small wooden boats known as Shikaras and house boats on the world famous Dal Lake are also celebrated cultural icons. The breathtaking panorama of Kashmir is the inspiration for many local artisans. However, this dynamic cultural heritage is under threat due to the impact of intermediaries between the artist and art lovers who cream off their commissions, leaving the artist little of the real worth of their creation. This process through the years has had a huge effect on the mindset of craftsmen and women who are being forced to abandon their traditional and generational skills to find better paying jobs. In the past, the isolation of the area helped local craftsmen as it was difficult to bring in goods from outside. Now, as access has improved, new designs at cheaper prices are available. This, coupled with apathy among the younger generation who are largely uninterested in spending long, tedious hours mastering a skill, has caused a gradual decline of the creative industries. In addition, the conflict in Kashmir has left the commercial sector in tatters. Communities are weary of business and have drifted towards the security of government employment. However, with the help of local government efforts are being made to revive the art of Kashmir.

Kashmiris are passionate about food. Their ultimate formal banquet is a royal cuisine comprising thirty-six courses, out of which fifteen to thirty are meat dishes, cooked overnight by specialist chefs. The cuisine of Kashmir was influenced by the different menus of various rulers and visitors who arrived from Persia, Afghanistan and elsewhere over the ages. At these feasts the guests are seated in groups of four, sharing their meal from a single large metal plate. Tea is drunk in copious amounts. Nun Chai (salty tea) and Kehwa (saffron tea with almonds) are particularly popular. Kashmir is also famous for saffron, apple and other dry fruits like walnut and almond. Kashmiris enjoy their music in its various local forms, for example sufi music, 'chakar'. The men perform a dance called 'Dumhal' while women perform a special folk dance known as 'Rouff'. 'Band Pather' (Folk Theatre) and 'Ladi Shah' (the national chronicler) are other entertainments unique to Kashmir in terms of their form and structure.

As the lush green forests spread the essence of tranquillity, local dress adds more character to Kashmiri culture. For men 'Khan dress' or Pathani suit with a skull cap is common, and 'Pheran' (a knee length, loose, cloak type) and 'Shalwar' with the traditional 'Kasaba' (headgear) is the popular attire of women. 'Pheran' is a common dress for all (men, women and children). 'Kangri' (fire pot), with hot embers in it, keeps them warm during freezing cold winters.

The culture of the inhabitants of this picturesque land has been massively affected by the security situation. Since 1989 the armed conflict has led to social disorder, disorganisation, physical and mental health deterioration, mass psychological depression and cultural aggression. Yet Kashmiris strive to continue their lives and keep their traditions and character intact. Despite the strain of living in a war zone, coupled with the impact of globalisation that has led to the discarding of traditional values particularly in urban areas, many efforts are being made to preserve the customs of Kashmir, be it language or any other art form. Efforts to preserve the Kashmiri language are notable with Kashmiri now a compulsory subject in the school curriculum. Parents who feel proud when their youngsters speak in English or Urdu are now keen to inculcate in them an interest in their mother tongue too. With this dawn of new hope, perhaps Kashmir will rise again.

As Emperor Jahangir rightly said about my homeland:

"If there's a paradise on Earth

Muddasir Ramzan was born in 1990 in Kashmir, where he lives. He has completed his Masters in English from the Central University of Kashmir. He can be reached at muddasirramzan@gmail.com