On the north Kensington streets, the truth of multicultural London is apparent - there is no cheaper life than that of a poor refugee.

The police tape that lined streets around Grenfell Tower told a tale of two cities. Multimillion-pound properties with perfectly manicured front gardens stood under the shadow of the still smoking and charred block. Throughout the night before, in church halls, civic centres and mosques all around, residents had gathered to sift through the donations and give comfort to dazed survivors and their friends and relatives. 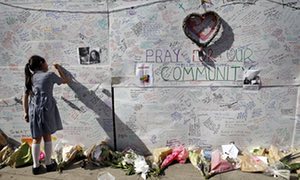 It was impossible to look at them and not see the obvious: they were, overwhelmingly, Arab, Muslim or African. They were European migrants, black British, refugees from the developing world – some of them second generation – and asylum seekers, sharing the tower with the poor, white working class of London. It was impossible to listen to the languages spoken on the phone to loved ones and not hear that these people were those often filed as “other”. It was impossible to read the names of the dead and the missing and not see that they, or their parents, were displaced from elsewhere. The first victim named was a Syrian refugee, Mohammed al-Haj Ali. The list is now extending into a roll call of the marginalised, the maligned and the disenfranchised.

Walking through the streets of north Kensington as the media descended,it was impossible not to see the stark segregation of the victims from the infrastructure that surrounds them. It was surreal to see the tower as the neighbourhood’s other residents sat in cafes in the sunshine and walked in and out of yoga studios; to note that every member of the council being interviewed was white and middle class, and that the stories of the victims were being conveyed by a news media far removed from the daily reality of these lives. A BBC journalist apologised “on behalf” of an irate resident who swore on camera. It was a moment laden with cross cultural symbolism.

These images don’t tell the whole story, but as the hours pass they harden the view that Grenfell and the fate of those who lived there will come to stand for all the ways society has failed to provide for its most vulnerable.

In Britain we talk about immigration in sanitised ways. We talk about it in numbers, in terms of what migrants contribute and take out of the system. We speak of migrants as net figures – how many, exactly, is the optimum number to keep the economy growing without draining our resources? Politically, after Brexit, the debate around immigration has reached a consensus where there is now a silence. You simply must toughen up your stance if you’re going to win over the floating Ukippers and not alienate those with “legitimate concerns”.

The rhetoric around migrants has become either toxic or banal and self-congratulatory. There is the stereotype of the scrounger, indulged and given a council flat in Kensington, the most affluent borough in London, by soft-touch authorities. The Mail’s online site headed down that road with pictures of, and unnecessary detail about, an “Ethiopian taxi driver” in whose flat it alleges the fire started. Then there is the “isn’t multicultural London brilliant?” detachment: you can live in a £5m house and get the most divine little scallops on a Moroccan stall for under a fiver!

Little thought goes into the conditions and daily lives of those who bring west London its exotic delicacies and eclectic vibe. Theirs are lives that often fall on the wrong side of wealth, class, race and political capital. To be housed in towers such as Grenfell is to be in a state of constant compromise in terms of quality of life and, as we see, safety. You have no options. Councils will store you as cost-effectively as possible. If life is cheap, there is no cheaper life than that of a poor migrant.

This is where the state so obviously, so disastrously, failed to protect and provide. But this is also where the local community stepped in to pick up the pieces. This is where London is truly multicultural: locals, both wealthy and council housed, brought together by the unavoidable closeness of the tragedy.

I was reminded of life in developing countries, where citizens resigned to the state’s cynicism and indifference develop their best, most coordinated responses to disaster. We still don’t know what caused the Grenfell Tower fire. But we now know something of those whose lives have been ended or changed for ever. Our individual complacencies have led to collective failure. Isn’t this the moment to join the dots?

Nesrine Malik is a Sudanese writer and commentator who lives in London. She is a former private equity investor.

This article was first published on the Guardian website