Abdul-Rehman Malik - Is God... A Muslim 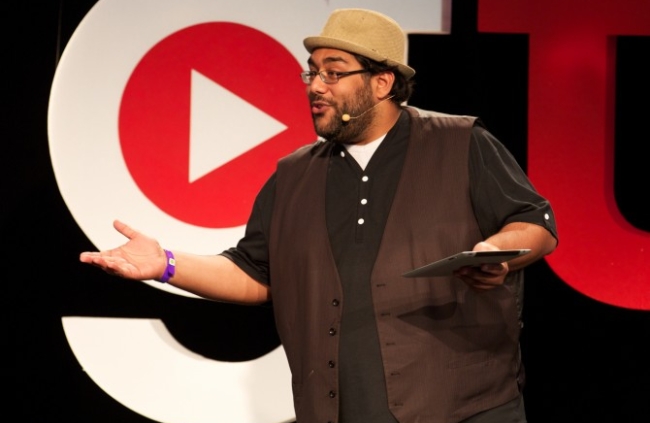 To get started I think it’s important to put aside the question of terminology because there are some crackpots out there who would like to confuse us and tell us that somehow the God that you worship and the God I worship are not the same. In Arabic the word for God is Allah. If there are any of my Arab Christian brothers and sisters out there you will definitely know that you also use the word Allah to refer to God. So God is Allah, is God. I think that’s really important because I think in talking about God we have to begin at the beginning and there is nothing more beginning at the beginning than getting our terminology straight.

For many of us I daresay at some point in our lives for most of us God becomes something proprietary. God becomes something that belongs to us. It’s said that Christianity and Islam share a missionary tradition and I think to a certain extend that’s really true. Well my short lived missionary career started off when I was probably 6 or 7 years old. My father was an accountant, an auditor and most of his friends and most of the individuals he worked with were Jewish and so we would often get invited to Jewish homes for Shavuot; for high holidays to celebrate and share a meal; so I made it my purpose suddenly with strategy to try and convert my father’s Jewish business partners. My strategy was very very simple I would make them say the Fatiha, the opening prayer from the Koran and then at some point over dessert I would get them to say the testification of faith – there is no God but the one God and Mohammed is his messenger. It was a bold step to try and convert a Jew over Sabbath dinner and I failed miserably – although I know Mr Goldenberg and Mr Steinberg were very very patient with me.

As a youngster at overnight Islamic camps held at the Mosque or the local school we would munch on popcorn and often watch videos of Muslim preachers duke it out with Bible thumping evangelicals on such scintillating themes as “is the Bible God’s word?” or “Jesus – Man or God?” These were gladiatorial matches between polemicists who – in retrospect – were not very good but we would watch these videos and we would be high-fiving each other every time we scored a proverbial point against the other side. The Muslim of course would always win otherwise they would not show us the video at Islamic camp because his opponent inevitably would be a door knob. What we left with for a time was a kind of religious triumphalism that our God had beat their God, our Book had beat their Book, our religion had beat down their religion; given the political circumstances of the early and mid 80’s you can perhaps imagine why this is completely understandable.

I cringe at the memory now because it reminds me so profoundly of what is wrong with much of what we call “religious discourse” today. God has sadly and frightfully become tribal. Our God belongs to our Creed, to our Church, to our way, to our people, to our led, to our salvation – to us! We create God in our own image. He begins to reflect the nasty, grimy aspects of our ego. He reflects our doubts, he reflects our base motivations; he reflects our desires; he reflects our inadequacies.

Islam and my tradition has an answer to those who make God in their own image. The Koran tells us in Arabic: “There is nothing like God”. So Islam in many ways responds to it’s sister religions and sister monotheisms with a radical monotheism – God is not like us – period! So then comes an obvious question. How then do we know God? The answer, as much as it pains me because I am overweight and inherently lazy, is hard work. Through contemplating creation; through God’s attributes. It’s often said that in Islam there are 99 attributes of God, incredible names like Ar-Rahman – the merciful; Al-Kareem – the generous; Al-Latif – the subtle. It’s true these attributes and their manifestations and creation they’re indications and creation that we know God. It’s through the wisdom of the prophets and the revelations that came before us that we know God. It’s also through service and through getting down into the muck and the grime and the difficulty of life that we know God. It is through action.

What does it mean to be a Muslim? Muslim as a word as a terminology actually simply means “one who submits to God’s will; one who acknowledges that one is a creation; that one is poor and impoverished before the majesty and the glory of the Creator. In the Koran we have a wonderful story. It’s said that in the time before time God gathered each and every one of us, our souls; all the souls that would exist from the beginning of time to the end of time. He gathered us all together before his magnificent, mighty and majestic presence. In that moment we were not flesh and bone like we are today; we were spirits, free of human encumberment and I can just imagine how our souls in the vision of the Creator must have felt like and the Koran tells us that on that day God asked us a question. God asked us “Elestu be Rabbikim?” – “Am I not your Lord?” It is said that as we witnessed the majesty, the awesome power, the creativity, the boundless mercy of Almighty God we responded in one voice “ Kalu Bela” – yes, absolutely you are our Lord! Submission, worship the recognition of God what in Arabic we call fitara is encoded into the very fibres of our souls. It’s encoded into our sinews; it’s completely within us and therefore each and every one of us spend our lives trying to reconnect to what the Sufis have called the music of day of Alast. The music of the day that we were called to witness because on that day there must have been a beautiful music that you and I made as we acknowledged God Almighty in his mercy, and his compassion and his creativity and his creative power. The Prophet Mohammed, on whom be peace, said by the one in whose hand is my soul; you will not enter the Garden until you submit and you will not submit until you love one another. Extend the greetings to one another and you will love one another and beware of hatred for it’s like a razor.

To me this is the vision of God that is not tribal and not partisan. It’s a transcendent God who we approach through the hard work of loving one another and rejecting the hatred that indeed could cut us.

I love folk music. I love political folk music; the more political the better. One of my favourite artists is an artist by the name of Steve Earle; an amazing man;
part time commie, full time revolutionary; serial marrying type! Steve Earle recently wrote a really beautiful song and I just want to quote part of it to you. Steve Earle sings and I can’t sing like him, although he has a beard. I wish I had his beard; it’s much bigger and nicer! Steve says “I believe in prophesy, some folks see things not everybody can see and once in a while they pass the secret along to you and me and I believe in miracles; something sacred burning in every bush and every tree. We can all learn to sing the songs the angels sing. Yeah, I believe in God and God ain’t me and then he goes on to say I believe in God but God ain’t us and finally he says I believe in God and God is God.

So is God a Muslim? God does not submit to us. It is creation who submits. So the answer is emphatically no – but are we all Muslims? I would suggest that in the purest sense of being souls that witnessed the magnificent power and beauty and mercy of God on the day when we were but souls and now we have come into the world as flesh seeking to reconnect with Him I would say yes – we are all Muslim.