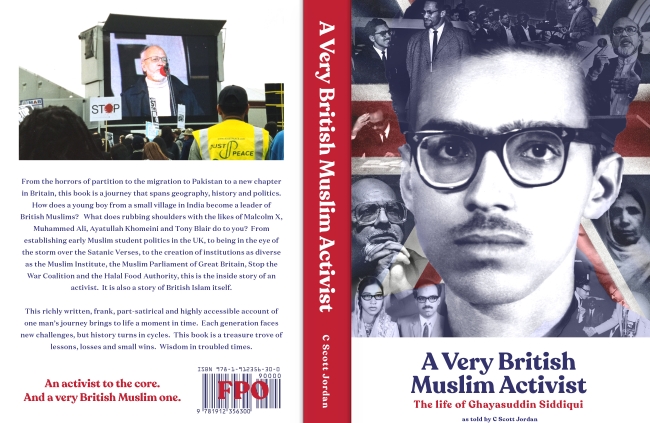 The email dropped innocuously into the Muslim Institute’s info account. Hopeful for an exciting event invitation or notification of a fascinating new publication just out, I opened it, quickly realising this was not some generic semi-spam, but an incendiary provocation by a right-wing journalist with Islamophobic form that, if mishandled, could really blow up in our faces: ‘We are aware that a journalist has said that she interviewed Ghayasuddin Siddiqui and Kalim Siddiqui many years ago and says that she discovered that they went to Tehran and asked Ayatollah Khomeini to pass the fatwa. She believes that, if Ghayasuddin Siddiqui and Kalim Siddiqui had not made that trip, the fatwa would not have been issued.’

It was 2019 and media outlets were trawling over events 30 years ago exactly, that culminated in the Rushdie Affair; the outcry over the publication of the Satanic Verses that would impact the British Muslim community for many years to come. A couple of weeks before the email materialised, Independent columnist Yasmin Alibhai Brown, a long-standing friend of Ghayasuddin Siddiqui, had made the astonishing claim in a Radio 4 interview that was referenced by the author of the email. It shouldn’t have been much of a surprise therefore that a vulture would swoop down and fly off with such intoxicating prey.

If I remember correctly, it’s true to say that the day after the Radio 4 interview, there had been low-level disquiet in the Muslim Institute camp. After all, this was a serious allegation being made against the founders of what had been the original incarnation of the Muslim Institute, even though it bears little resemblance to the Fellowship society we run today. There was some fleeting talk of issuing a clarification, but we all agreed that any engagement with hearsay would only fuel the non-story and prove counter-productive, particularly as the Muslim Institute had not actually been referenced. So upon receiving the email, and after some renewed consultation, I avoided any ‘unknown number’ phone calls, which is fairly healthy practice anyway in my opinion, and prepared a two-sentence shut-down that I wrote on a piece of paper and carried around in my coat pocket for the next few weeks, glancing at it every time I thought I might forget what I needed to say in case I should be door-stepped like the Z-list celebrity I always dreamed I would grow up to one day be.

The thing is, we knew how the more sensationalist fringes of the media operate, just as Kalim Siddiqui understood how to garner headlines and build his political capital and profile in his heyday. This wasn’t the first time this claim had emerged, although it had been dormant for many years, and the late Siddiqui had cultivated the ambiguity of the actual circumstances to his advantage. By playing the media at their game he was able to situate himself at the centre of seismic historic events regardless of the actual role he had played. In the biography of his life, written by Critical Muslim deputy editor C Scott Jordan, Ghayasuddin Siddiqui spoke at length about the mythology surrounding his and Kalim Siddiqui’s role in the Rushdie affair. The Siddiquis (no relation to each other incidentally) had initially been inspired by the Islamic revolution in Iran, fervently supporting the postcolonial nation’s severing of exploitative Western ties. Keen to establish an Islamic resistance to Western hegemony, they became frequent guests of Iranian intellectuals at conferences in Iran; reciprocating by hosting Iranian dignitaries in the UK. But by 1989 this enthusiasm had faded to disillusionment, and it was a chance encounter with Mohammad Khatami at Tehran’s Mehrabad International airport, a mere few hours before the fatwa against Rushdie was announced, that spawned the tale of alleged influence. Whatever conversation had passed between Kalim Siddiqui and Khatami (Ghayasuddin Siddiqui remembers standing a short distance away from the men while they talked briefly so was not privy to the entire exchange), to suggest that these two British-Indian activists could abruptly influence the carefully strategised political machinations of the Islamic Republic of Iran, would be quite a stretch of the imagination.

The Siddiquis saw themselves as reformers, which in light of the stories swirling around about their influence in Iran may seem incongruous. But for them the revolution was a victory for Muslim intellectuals and thinkers who would dismantle the corrupt and stagnant remnants of the Shah’s regime with reformist Islamic rule. Of course, this did not happen. But the fact that this was the reform they idealised, is poignant.

In her recently published book, Journeys Towards Gender Equality in Islam, the Iranian-born academic Ziba Mir-Hosseini revives such poignancy. Her description of her anthropological research, and specifically her life’s work on Islamic law and gender, reflects a deep disillusionment not unlike the one Ghayasuddin Siddiqui speaks of during that period’s latter sunset. Mir-Hosseini writes: ‘In the early 1980s, when I first started attending the Tehran branches of the post-revolutionary family courts, presided over by Islamic judges, women who came to court… used every occasion… to remind the judge of his role as custodian of the Shari’a, and of the injustice of a system that could not protect them.’ Despite the imploring of the women, desperate for restorative justice in the face of cruelty, hardship and mistreatment by men, the judges repeatedly upheld unfair decisions they declared were Qur’anic deliverance. Women were horrified to find that their husbands were being given free rein to take a second wife without seeking their permission, and were allowed to divorce without impunity, often leaving them and their children abandoned and destitute. The injustice that had been meted out to Iranians by the tyrannical rule of the Shah, considered a puppet of Western interests, was merely replaced by a brutal theological dogma that seemed to show no mercy, declaring that it was carrying out God’s work. Mir-Hosseini’s response was to become a reformer.

Samia Rahman is the director of the Muslim Institute and a deputy editor of Critical Muslim, which this article appears in.