A Matter of History 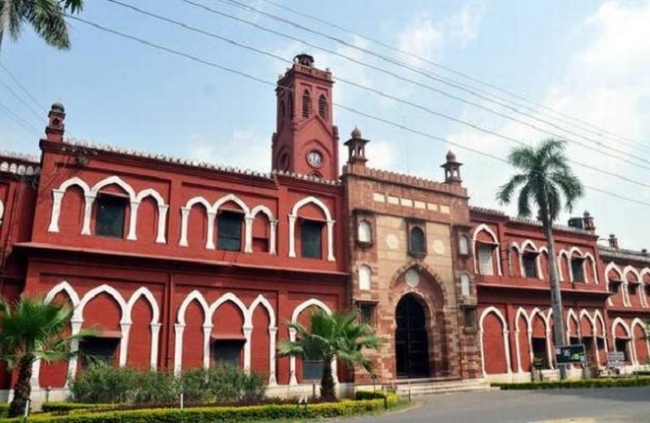 The anger, the shouts and the media lapse we usually see about Kashmir in news debates recently was transposed to the Aligarh Muslim University, a vision of Sir Syed Ahmad Khan, which was for some time the focus of argument in all mainstream and local news rooms.

Activists of Rashtriya Swayamsevak Sangh (RSS), known for its hardcore Hindutva ideology, wanted to organise ‘shakhas’ (camps) inside the university campus ‘to familiarise the students’ and to ‘dispel misconception’ about their group, which they requested in a written letter to the Vice Chancellor of the AMU on 27th April. Aligarh Muslim University Students Union (AMUSU) responded: ‘It is an educational institute, not a political hub. We will oppose this move. RSS’s ideology is to divide the nation and they will not be allowed to enter the campus. If required, students will fight for it.’

As this month stretched out, Satish Gautam, the MP of Aligarh, while writing to the Vice Chancellor of AMU, objected to the hanging of a portrait of Muhammad Ali Jinnah, who is alleged to be responsible for dividing India, on the walls of the AMUSU office. On the 2nd of May, when the former President of India, Hamid Ansari, had been invited to attend an event at the University, a group of Hindu Yuva Vahini (HYV) entered the campus and disturbed the atmosphere of the varsity by shouting objectionable slogans. As witnessed, many of them had katas, locally-made guns, with them. The security staff of the university detained them in a neighboring police station. However, they were not held for long. Their other companions, in a larger group, more furious, carrying weapons and sticks, came to the police station and freed them.

Afterwards, these Hindu right-wing activists, this time escorted by the local police, once again entered the university campus, with more fervour, shouting communal slogans. And when the students went to file a FIR [First Information Report] against the intruders, they were lathi-charged and tear-gassed by the police, wherein many of them were severely injured.

Witnessing this violence by the police, academic work was halted, university students are protesting, peacefully, some protestors are on hunger strike; they demand a judicial enquiry and the culprits to be booked under the law. Some of the students see a larger design behind the attack. The teachers of the university said that this was the first time that a Hindutva group had barged in and disrupted an event, wherein alumnus Hamid Ansari was supposed to be conferred with an Honorary Life Membership.

On the news debates they target the university as a hub of anti-national activities and portray the issue as a controversy about the presence of Mohammad Ali Jinnah’s portrait in the Aligarh Muslim University Students' Union Hall, which isn’t true. There’s a tradition of giving Life Membership to those who have contributed to the university or to the world; for example this membership was given to reputed figures such as Gandhi, Nehru, CV Raman, the Dalai Lama and many others, whose portraits hang on the walls of the AMUSU (Aligarh Muslim University Students’ Union) club – which confers the award of Life Memberships.

Because of his financial contributions and making AMU a residuary beneficiary in his will, Jinnah was also conferred an Honorary Life Membership in 1938, much before the people of pre-partition India could have even thought of the division of their country, when their sole aim was to get freedom from British colonialism.

In the media debates it seems they are in contradiction with the Aligarh Muslim University, but the attack on the students was rightly condemned by the majority. The students of the university received good support from civil society members, students of other universities across the country and by the AMU alumni the world over.

Originally established as Mohammedan Anglo-Oriental College in 1875, it became Aligarh Muslim University in 1920, and incorporates all castes, creeds, religions and genders. This university is an Institute of National Importance provided under the Seventh Schedule of the Indian Constitution at its commencement.

The people who are making an issue of a portrait hanging on the wall of a AMU building must understand that Jinnah is now history, not faith. But, instead of bringing water to quench the fire, they add fuel to it: burning in their own hatred.

Muddasir Ramzan is an aspiring writer and a PhD candidate at the Aligarh Muslim University, he can be reached at muddasirramzan@gmail.com.