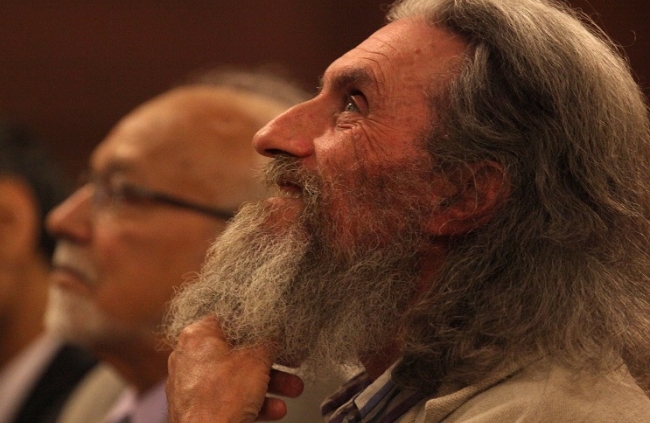 There is something inexorably charming about London for me – its hidden little nooks and crannies. I have been walking around Holbon and Russel Square for the better part of six years and I hadn’t noticed this side street called ‘Cosmo Place’ before today. This little rabbit hole took me to a beautiful little park called Queen’s Park. Seeing this idyllic park for the first time was a little annoying though. For six years, I had to go to nearby Russel Square for some quiet time. Russel Square was far bigger and unfortunately far more popular (read: noisy). Queen’s Park was nice and quiet. I doubt many even knew about it.

I soon found myself at the Art Worker’s Guild – my destination for today. I was attending the second annual Ibn Rushd lecture organised by the Muslim Institute. I had missed the inaugural lecture last year, with much regret so I was rather resolute not to miss this one. I had another reason not to miss it – the guest lecturer this year was Professor Oliver Leaman and I was a big fan of his writings.

Certainly the atmosphere of the Art Worker’s Guild was conducive to the title of Professor Leaman’s lecture – Islamic Philosophy Today : Problems and Possibilities. The Guild felt old. A good kind of old. One could imagine attending a lecture by Marx or Darwin in such a hall. And when Professor Leaman took the podium, I found myself humming the opening theme to Fellowship of the Rings (God knows why!)

Professor Leaman began talking about Ibn Rushd, quite appropriately, being the eponym of this lecture series. He began by disclaiming the reason behind Ibn Rushd’s exile, claiming instead that we don’t really know the reason behind it. He expounded on Ibn Rushd’s approach which he called the ‘tariqah burhaniyya’ (way of proof). The word ‘tariqa’ (path or way) usually connotes a spiritual group or sufis so to hear it being associated with rationalism was startling. Ibn Rushd was not a man who gave much credit to mysticism. Professor Leaman himself appeared rather dismissive of the mystical approach himself.

I would probably take issue with him at this point. While I do agree with his proposition that many verses of the Quran (especially those pertaining to metaphysics and theology) do need a heavy dose of reasoning before they can be properly understood, sometimes reason acts as a limiting agent which prevents us from fully experiencing revelation.

This is not to say that reason has no role at all. I see reason as part of the launch pad from which we propel ourselves into the inspiring emotionality of the text. We need reason to arbitrate the right meanings to impose upon a Quranic verse. We need to then factor in the textual coherence, consistency with overall message, flow of the passage. All this requires reason. The Quran does not look kindly on those who refuse to contemplate upon it (Ch 47 Vs 24).

However, the launch pad is useless without the actual launch. There must be a point when all the language and reason leaves us and we become inspired by meanings. This is where I think Professor Leaman and even Ibn Rushd himself sold themselves short with regards to the mystical experience. Spirituality, emotionality and mysticism need not necessarily be negative elements but rather what inspires humankind to change.

In any case, Professor Leaman was spot on about his claim on the underdeveloped nature of Islamic Philosophy in the Sunni/Arab world. Sadly, we see very often the Islamic priesthood claiming that ‘philosophy is haram’. Philosophers are usually vilified or at the very least ignored. Often they find refuge in the West. A rather famous quranist philosopher, Dr Mohamed Shahrour said that the Muslim world inherited the dogmatism of Al-Ghazali whilst Europe inherited the rationalism of Ibn Rushd. I personally find this a little simplistic because Al-Ghazali clearly mastered some heavy debating skills as can be seen from his ‘Incoherence of the Philosophers’. He was only against Greek thought and its limits. Ibn Rushd was also no heretic despite his devotion to reason. He was a devout Sunni Maliki and did not question religious precepts. He only sought to unite reason and revelation.

I did not manage to get a question to Professor Leaman during the Q&A session but still managed to stalk him long enough to ask him the following: What is Islamic Philosophy? Is it philosophy from a particular geography? Or from a particular people? Or pertaining to certain subjects? Can a Non-Muslim be an Islamic Philosopher? Can a Muslim be other than an Islamic Philosopher? Surprisingly, Professor Leaman was very undogmatic on the issue. He basically agreed that it was a problematic term and as I suspected, it became convenient rather than factually correct to use it.

Islamic Philosophy is on par with African-Caribbean Philosophy or Chinese Philosophy – that is to say, philosophy produced in tandem with the existence of a particular civilisation or culture. It is not one thing but a dynamic of things.

All in all, I had an inspiring time. I look forward to meeting Professor Leaman again or at least, to dreaming about the bookshop in Tehran which he mentioned – that only sold books on philosophy!