My evening at the Muslim Institute Ibn Rushd Lecture 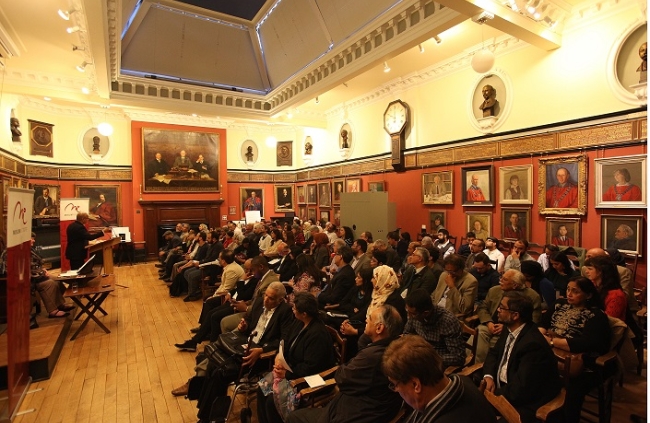 It’s becoming a little tradition with me to spend at least one summer evening a year at the Muslim Institute’s annual lecture. The event appropriately called the ‘Ibn Rushd Lecture’ and completed its third session. Held at the Arts Workers' Guild in Holborn, it exudes a feel of those old intellectual circles once held in this great city of ours. No other Islamic organization can do it like the Muslim Institute.

I found myself seconded into helping out with the evening’s preparation which I gladly did. My reward was being able to hobnob with the lovely Meryl Wyn Davies and getting an unhurried handshake and a hug with the legendary Ziauddin Sardar who inquired after my scholastic developments (such as they were!). To have these two people speaking to me on such a personal level was simply astounding when I think back to my younger days admiring their work on TV. ‘Faces of Islam’ was a favourite series of mine which continues to colour my own Islamic cultural theory till today. I am aware of how that exposes my geekery, yes.

Today’s lecture was entitled ‘Between Ghazali and Ibn Rushd: Ethics, Reason and Humility’ by Professor Ebrahim Moosa. He struck me as a deeply humble man for all his knowledge but he had a way of delivering ‘stealth jokes’ and I found myself bursting out with laughter a few times throughout the evening.

The professor started off by warning us straight away not to fall into lazy generalizations (like Al-Ghazali was the executioner of Islamic philosophy or that Ibn Rushd was the unsung hero). That was certainly Dr Shahrour’s view. Dr Shahrour is a Quranist thinker from Syria who believes that the Muslim world went on a downward spiral because they chose to institutionalize Al-Ghazali while Europe came to its enlightenment for adopting the thinking of Ibn Rushd. The truth was far more complex, it seems.

Al-Ghazali (1058-1111) was a complex personality. He was a great scholar and prolific author whose works delved into the disciplines of theology, philosophy and mysticism. His magnum opus called the Ihya Ulum Ad-deen’, as per my understanding, seemed to ‘operationalize’ Sufism. While Sufism had erstwhile been something rather theoretical, even anecdotal, with Al-Ghazali it had become an experience one could access through mundane living. This evening however, his work on refuting the Peripatetic philosophers (Greek influenced Aristotelians mostly) was highlighted. It is called ‘Tahafut al-Faylasuf’ (Refutation of the Philosophers). In this work, Al-Ghazali pronounces heresy on those whose beliefs contradicted Islamic teachings.

After the death of Al-Ghazali, came Ibn Rushd (1126-1198) who was born in Muslim Spain. He was also a stellar academic who wrote on theology, philosophy and a number of sciences. He answered Al-Ghazali’s Tahafut by reconciling faith and philosophy and answering Al-Ghazali’s accusations towards the philosophers of being heretics.

What was the outcome of this exchange? Despite the clear victory of Ibn Rushd, not least owing to the fact that Al-Ghazali was already dead, Al-Ghazali still gained the upper hand in the field of Islamic discourse. This could be due to the fact that Al-Ghazali managed to systematize what become crucial to the Sunni doctrine due to his aforementioned magnum opus. Sunnism had consolidated its power just then and became what we now know as Islam (with Shia Islam remaining a distant heterodoxy). This contributed to Al-Ghazali’s dominance in Islamic discourse since then. It was not due to the notion that Al-Ghazali killed philosophy. He didn’t. We did.

Professor Ebrahim Moosa also emphasized that both Al-Ghazali and Ibn Rushd were also products of their time and situations. They were both, for example, supportive of the notions that the majority of the people would not be able to understand the deeper, more allegorical understandings of the Quran. These people should just be left with the literal meanings which are less likely to confuse them. Such elitist mindsets will not help the Ummah, I don’t think.

Today, little is known of the developments of current Muslim philosophy. While Majid Fakhry’s book ‘Islamic Theology, Philosophy and Mysticism’ does note Muslim philosophers of the 20th century (like Iqbal and Tabatabai) but these philosophers, great as they were, did not move civilizations like early Muslim philosophers. They operate strictly within the bounds of Islamic thought. Rather, what we need are philosophers from the world of Islam who engage with current trends in global philosophy. Perhaps they can answer the children of Heidegger, Foucault and Derrida and provide the next steps in world philosophy.

I managed to have two questions of mine fielded to the good professor. The first was on Al-Ghazali’s notion of philosophers going against ‘Islamic teachings’. What constitutes ‘Islamic teachings’, I asked? Professor Ebrahim replied that Al-Ghazali was a scholar who was retained by the Abbasid caliphate and hence had to acknowledge the ‘official doctrines’, as it were. Fair enough, this only shows that that he’s not only fallible, we may bypass him altogether. If we choose to construct a different framework, there’s nothing to hold us back.

The second question I asked when I sneakily ‘found myself’ in the long queue for dinner for the second time. Well there was no other way to speak to Professor Ebrahim so there I was. I managed to ask him about what he thought Ex-Muslims can add to the discourse. He agreed that even their dissent can add to the discourse. This could even change of what we conceive to be the ‘Ummah’. Sadly the conversation ended there.

The only bone I have to pick with the Muslim Institute is that the Ibn Rushd lecture is only held once a year. I would have preferred quarterly or even once every sixth months. So there I was, all by myself in Holborn, walking back to the station from whence I came.

Farouk A. Peru is a Phd Candidate in Islam and Postmodernism and previously taught Islamic Studies at King's College, London. Read his blog here