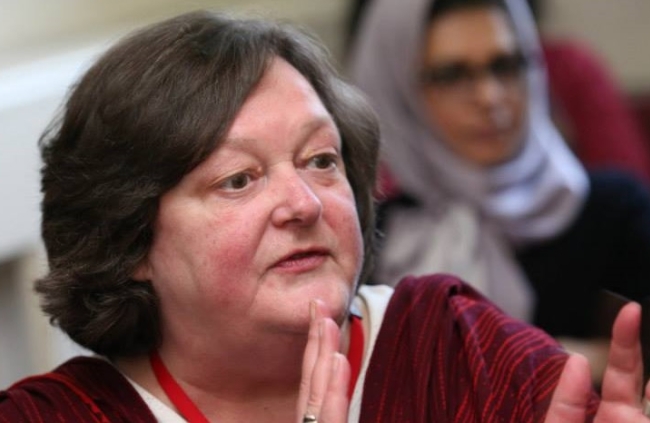 It is with great sorrow that the Muslim Institute announces the death of Merryl Wyn Davies (23 June 1949 - 1 February 2021).

Appointed in May 2010 as the founding director of the re-launched Muslim Institute, Merryl continued her involvement with the activities of the Institute right up to her passing, most recently contributing to a panel discussion on 12 December 2020 ‘Against the New Normal: Covid and Our Futures’, with her friend and long-time collaborator Ziauddin Sardar, and her dear colleague in Malaysia, C Scott Jordan.

Her larger-than-life Welsh humour, razor-sharp intellect, and wealth of knowledge contributed to the air of conviviality Muslim Institute events became renowned for. A voracious reader, her love for books was almost matched by a weakness for cigarettes, which meant she could often be found discreetly lurking outside at gatherings, smoking regardless of the weather. She was a much-loved figure at Muslim Institute events, whether introducing the Annual Ibn Rushd Lecture or leading a residential weekend discussing misogyny at Campolungo in Italy, as guests of Muslim Institute Fellow Brandino Machiavelli. Whatever the occasion, her warmth and generosity of spirit did nothing to temper a unique ability to analyse pressing issues concerning Muslim communities in contemporary times. She firmly believed in the need for Muslims to be critical and introspective, so that they may be the architects of the solutions to the issues they face. The Annual Muslim Institute Winter Gathering at Sarum College in Salisbury will not be the same without Merryl's warm and welcoming presence, and insightful contributions.

Born on 23 June 1949, in Merthyr Tydfil, Merryl was a writer and broadcaster with some 40 years of involvement with Muslim intellectual life. Born into a city of coal miners, she wrote movingly in Critical Muslim of the Aberfan colliery disaster of 1966. After graduating from University College, London, where she studied anthropology, she embarked upon an illustrious career in journalism, during which she struck up a prolific intellectual rapport with the writer Ziauddin Sardar, that would span decades. At the BBC she worked for ‘Everyman’, ‘Heart of the Matter’ and ‘Global Report’ and was a columnist and regular contributor to the Muslim magazine Afkar/Inquiry. Her books include Knowing One Another: Shaping an Islamic Anthropology, Beyond Frontiers: Islam and Contemporary Needs, and Darwin and Fundamentalism. With Ziauddin Sardar she wrote a series of books covering seminal events in recent history. These include Distorted Imagination: Lessons from the Rushdie Affair, Barbaric Others: A Manifesto on Western Racism and a trilogy on America: Why do People Hate America? American Dream, Global Nightmare, and Will America Change?

Proud of her Welsh heritage, two and a half years ago Merryl had made her glorious return to her adopted home in Malaysia, where she had spent much of the 1980s and 1990s working as a speechwriter for Opposition Leader and former Deputy Prime Minister, Anwar Ibrahim. There she revelled in the Malay culture and cuisine and adored the living multiculturalism upon which the great cities of Malaysia are founded and ordered. Kuala Lumpur, the city of contrast and diversity, was always a dear place to her where many memories were formed. She only wished, that had she the power, she could run a wrecking ball through some of the horrendous examples of grotesque hyper-development that had demented the KL streets that once represented a balance between humanity and nature as well as amongst humanities diverse peoples. There she waved the flag for the Indian Ocean World and Indus Valley Civilisation, ready to deliver hours of impromptu lecture for inquiring minds. She was an East-West woman and cared deeply for people, particularly those who had been bullied by one civilisation or another (and she was not above making sure the bullies of this world got their comeuppance!).

She was also an unapologetically working-class woman down to her bones, yet with a taste for the finer things in life. A collector of artefacts (which she dubbed ‘objés’), she was number one supporter of the Welsh Rugby team (‘my boys’ as she called them), and a master of gastronomy. Wherever she travelled, she always tried to arrange for accommodation by the sea, preferably in the eyeshot of the loading docks, for it was the ports of the world that connected every new place to home for her. She sought solace and inspiration in films, and could regale the merits and pitfalls of movies of all genres, eras and persuasions. She passed away in Petaling Jaya, Malaysia, in a world she adored, surrounded by friends who loved her dearly. Thanks to the technology of today she was never too far away, from Kuala Lumpur to Merthyr Tydfil.

On 20 February 2021, Fellows and friends of the Muslim Institute gathered virtually as per Covid restriction to pay tribute to our dear friend, colleague and mentor, Merryl. The evening of shared memories, tears and laughter can be viewed by clicking here.

Her absence will undoubtedly be felt in Muslim thought, scholarship and research. May her soul rest in eternal peace.