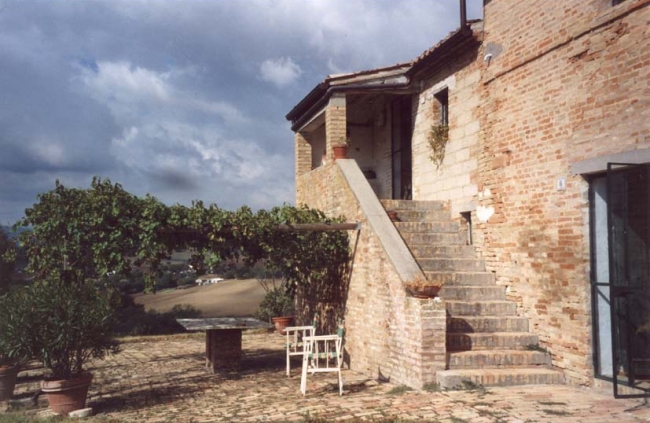 Seasons are such variable things in these isles. Ever anticipated, they can turn up in the most unexpected ways and times - or not; sometimes they interminably drag their cold and soggy climatic boots instead of ushering in finer weather. So it was that there came a time when spring should have made its arrival – ‘perhaps tomorrow’ as the poet Edward Thomas said, yet somehow winter kept clinging on. Little surprise then that people should long to get away from the dank dreariness of winter in the city to breathe fresh air with greater promise of spring in balmier open spaces. At such a moment the Muslim Institute had just the answer. We offered the weary and careworn not merely daydreams of vernal burgeoning but the time and place to turn deep drafts rejuvenation into fresh thinking and new ideas.

Campolungo is a rural idyll in the Ancona province of the Le Marche region on Italy’s Adriatic coast. A bucolic dream of days gone by, Campolungo is a farmhouse that sits on its sloping hillside overlooking undulating countryside. The area is dotted, at respectable picturesque distance, by other farmhouses; their fields in varied colours of preparation for cultivation. The whole area melds into a kaleidoscope of vernal tones as it is swept by cloud shadow and shading. In the distance mountain peaks, still snow-clad, fade into and out of the mists. It is a setting that reeks of tradition and continuity and yet, within, Campolungo has been subtly respectfully adapted to tasteful fully modernised rustic charms.

Twelve of the Institute’s Fellows made the journey. A short flight to Ancona’s new, spruce, well-appointed airport and a delightful 20 minute drive through country lanes brought them to the farmhouse. A stay at Campolungo has all the necessary accoutrements of an away weekend. Just the minimum of relaxed self-reliance by convivial mucking in at breakfast and lunch, the highest standard of catered evening meals, the chance to sample local produce (cheese and pasta to the fore) combined with lively company and animated discussion.

Discussion and debate in this relaxed setting is the ulterior purpose of this Muslim Institute initiative. The very first excursion to Campolungo was to consider that hoary old familiar question: gender in Islam. And what more apposite setting could there be to consider the intersection of the usual suspects - tradition and modernity - than a refurbished farmhouse that maintained carefully considered acknowledgements of an age-old way of living yet adapted to meet the requirements and aspirations of 21st century life. Maybe this explains the remarkable transformation that overtook the conversation.

A careful agenda had been devised, designed to steer the talk beyond the normal parameters within which gender issues in Islam are debated. How many times have we all been confronted and frustrated by the 'same old same old' litany of what is the ideal, how do we understand the status, role and realities of women’s place in Islam, what is mere cultural tradition and what Qur’anic necessity. The result is discussion we can have in our sleep – precisely to quote the Fitzgerald’s ersatz Omar Khayyam because we endlessly ‘came out by the same door we went in’! Remorseless stereotypes have shaped the perpetual limbo of stereotypical debate through which we all sleepwalk. Hardly surprising that genuine insight is the notable absentee in the perennial ‘groundhog day’ experience of the most common topic of Muslim discourse.

Campolungo, however, would be different. How? It began with a simple proposition: personal experience. It is amazing how the simplest, most obvious question can make a world of difference and thereby render long hours of strategic crafting redundant. Instead of treating personal experience as obviously anomalous, here it would be the starting point. The first discussant was asked to explain their own background and influences and how that shaped their understanding of being a Muslim woman. Thus the cosmic pattern was disturbed. We do not live as stereotypes, it thankfully transpires. We each live as rounded individuals liberated from mass constructs by the individuality of the people among whom we are born, grow to maturity and how we shape our own lives and thinking. Who would have guessed Muslim women are made individually just like other people? Once one person ventured on the simplicity of this aberrant path everyone launched themselves into the spirit of the occasion. Each participant began with a personal reflection on their own personal journey and circumstances. The collective effect was stunning. The microcosm we created for our debate was radically altered to liberating consequences.

With this single bound, discussion was free from the time-honoured, mind-numbing roll call of what the expected irrelevant relevancies deem to be essential. We could find no women who felt the familiar stereotypes in any way described them, not their childhood influences and experiences nor what they had made of their lives. Suddenly, removed from the fretted conference halls of Britain, the stereotypes emerged as the great inhibitors of sensible debate, the straightjacket on clear thinking and most of all the distorting factor in appreciating the complexity, diversity and real challenges that face Muslim women here, there and everywhere.

Let it not be said that the Campolungo effect was confined to the female participants. Gender is, as we soon began to appreciate, a culturally constructed domain of various potential - including for the male of the species. Were they all new Muslim men? Or had Muslim men always been more diverse, as open minded and divergent from the stereotypes as the assembled women? Yes, dear readers, so it proved. Our gathering was immaculately free of male chauvinism. Even those who owned to being indulged with the perks of male exceptionalism having no foundation in household chores – the cooking, cleaning and primary child rearing duties - that liberates men to control and dominate the wider world pursued active endeavours on behalf of gender equity.

Consider how revealing these personal reflections are for the form of conventional debate. The stereotypical rules of how we think about gender begin from propositions that have no relevance to the experience not just of our select few but in all honesty to the proliferating many, and perhaps always have. The usual debate begins from the extreme, the perverse behaviour of limited and select cultural or national groups. It begins from constructed stereotypes developed by the distorted and far from disinterested imagination of Orientalist prescription.

Thinking through personal experience is not mere anecdote but grounding debate in realities. It does not mean all is perfect. It does not obscure or obviate human problems which are not exclusive to Muslim existence but refocuses attention on unresolved intractable human dynamics. Home/work balance, domestic violence, giving the appropriate value and respect to stay at home mothers who are not non-entities and perfectly capable of being active agents in building community and society, ensuring education according to need and merit for all, finding an appropriate meaning for modesty in modern life to liberate the life and choices of all equitably – the list is long. The culture, politics and economics of the gender dynamics of all human life is and should be an open field of engagement, experiment and endeavour by all Muslims. That Muslims seldom discuss such issues as if they were part and parcel of the entire human race with their diversity, complexity and multiplicity of influences and circumstances included is the real culprit identified at Campolungo.

Strawmen are as useless, we find, as strawwomen. Reality, the reality of lives lived in contemporary circumstances here and now in Britain cannot be reached through the distorting lens of stereotypically defined inherited categories or imposed irrelevant stereotypes. The willingness to embrace and be hamstrung by stereotypes however is unrelenting. On numerous occasions our participants had occasion to note that while, of course, such things had not, did not and could not apply to their person and experience it still somehow existed out there among the lumpen Muslimdom of Britain and beyond.

The lingering question is how many lumpen Muslims do we each actually know? Is this category conjured from sleepily thought convention? Why is the reflex to invoke this lumpen category a habit we are too lazy to think beyond? How special do we each think we are? Or is it that, give primacy to generality and generality needs its Other, a role best filled since time immemorial with strawmen and strawwomen.

Campolungo gave all who participated the possibility of thinking differently and hopefully the determination to centre future gender debate on new premises. As a modernised traditional farmhouse it had that designer essential – the wood burning stove. What better place to engage in a bonfire of the strawmen and strawwomen.