Voicing the Necessary - A Good Start 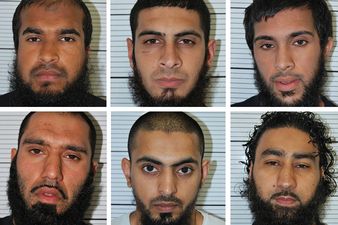 When the BBC reported, a few days ago, that three apparently very dangerous Islamist extremists had been sentenced to long jail sentences in the UK after being fortuitously apprehended following a routine check on their car, an intriguing, totally new and encouraging phenomenon occurred: it was the item which first showed a clip from three years ago when a car was stopped for some banal reason somewhere around Birmingham and three individuals in beards and kaftans emerged, and were taken into custody presumably after they were found to be suspects which the police had been looking for. After the clip, and the image of the courts where the trial had just ended, the BBC reporter on the News at One said that "a local Muslim group" had issued a statement condemning the extremists, who were giving a bad name to Islam, and welcoming their being shut behind bars.

Mysteriously, this item disappeared from the 6 o’clock news, replaced by a single local Muslim individual who similarly voiced his satisfaction with the result of the trial. It would be interesting to establish why the first item, of the Muslim group’s statement, had been replaced by the second one. My evil suspicion is that the editor of News at One was a bit too hasty in broadcasting this fresh piece of news, and that after lunch, once some bigwigs of BBC News had had a chance to view the item they decided it was a bit too much in favour of the Muslim side and decided to put in the single citizen’s token Muslim comments instead. But this is purely a hypothetical inference coming out of my long-nurtured cynicism regarding the media.

What I find more interesting and of an entirely different category of importance is the fact that for the first time I have heard the voice of a Muslim community praising the Courts for condemning three Muslim wrongdoers. This may have happened before, but if it has it has happened too seldom. One of the characteristics of the Islamic world, a characteristic which becomes especially noticeable and contradictory in the Muslim communities of the West, is the silence regarding the misdeeds of its co-religionaries who become embroiled in the jihad against the West. It sends a message to the already paranoid and suspicious Europeans living all over the world, that all Muslims are secretly wishing for the overthrow of democracy and the inauguration of a Saudi Arabian style Shari’a law in their own country. It is a powerful incentive for justifying equating “Muslim” with “terrorism”.

Of course this can be a delicate matter, to be handled with care. Surely one of the major obstacles for any official, “Muslim” comment being made on what Muslims may do around the world is the absence of a Muslim spokesperson; there are a wide range of Muslim denominations, and Islam does not have any established hierarchy to voice a general, official “Muslim” opinion. Not that it would be desirable to have such a figure: one of the winning traits of Islam is precisely that it does not have, or encourage, a priestly hierarchy. It is also difficult for any Muslim organisation or community to condemn people who are totally outside their normal cultural environment, since such condemnations could easily be interpreted as a sign that the wrongdoers were in fact somehow connected to them. This is why the outspoken reaction given by this not-better-identified Birmingham Muslim community spokesperson is all the more welcome. For at the local level at least, surely the local community or the local mosque should be able and could be expected, to voice their concern for members of their own community who stray beyond the confines of legality.

A move in this direction would make a big change in the perception of Muslims by other communities, who would feel that, however separate and mysterious, they can at least relate and find common ground on this kind of issue with the Muslims who are their neighbours, work colleagues or sundry kebab sellers. But it would also make a contribution in helping to isolate and intercept possible indoctrination of people who may not be clear as to where to turn in their desire to oppose the many and often overwhelming failures of our western democracies.  It would distance the small number of extremists from the peaceful majority. It would encourage discussion between groups of Muslims of differing opinions, if the ones who are ready to condemn extremists had an opportunity to offer their views publicly.

Why are Muslim scholars, writers, religious people almost invisible when some Islamic terrorist act is discussed in the media? Is it prejudice on the part of the western media? Is it coyness on the part of the Muslim side? I have always wondered, and I do not know the answer. Not being an anthropologist or a social scientist I have a very superficial perception of how or if and to what extent different communities mingle in our multicultural society. But I have the impression that the Muslim community tends to stick very close to itself. If this is true it risks being shunned in its turn, and tarnished with the age old tars of unjust suspicions and accusations which are the all-too-efficient tools of prejudice and ignorance.