“Again, I mourn the murders of people I never knew. Again, I am harassed & told to atone for terror I did not and would never commit.”

The words of Black American Muslim activist Blair Imani tweeted in the aftermath of the horrific attack on the Manchester Arena pretty much sum up the feelings of most British Muslims that I know. As an academic who has researched and written about these issues over many years – this attack was all too close to home. My immediate reaction was sadness at the loss of life and then anxiety about potential negative repercussions. 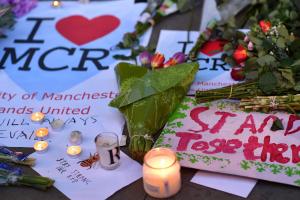 I am concerned that further attacks might take place, and also concerned about what this means for ordinary British Muslims who will inevitably face a backlash from racists and Islamophobes. The unscrupulous have already tried to take advantage of this tragedy with likes of Katie Hopkins “We need a final solution” tweet and Telegraph columnist Allison Pearson calling for mass internment, signalling responses of the worst kind. The EDL have been re-energised and mosques have already been vandalised. Even though we don’t yet know all the names of those who perished, the government lost no time in indicating its intent to expand its anti-terrorism policies.

Attending a vigil last night at the British Muslim Heritage Centre in Whalley Range, south Manchester, I listened to a parent who told us of about how his children managed to leave the concert safely. The ones who didn’t were robbed of their adulthood by a deluded murderer who thought he was acting in the name of Islam.  This is the same mindset that has no qualms in killing fellow Muslims that disagree with them and exposes the anarchism of jihadism. It is unbearable for me as a father to contemplate harm coming to my kids as all life is a sacred gift. Yet some people have no hesitation in taking the lives of other people’s children.

I’m mindful of the fact as British citizens we are facing a continued threat to our safety. But I am also aware that this situation was originally caused by decisions made by politicians claiming to be acting in the national interest. This is the same mindset that has no interest in the large numbers of Muslim children dying every day as result of wars and conflicts that they initiated and sustain. Only a couple of days before the Manchester attacks 68 children died after terrorists bombed a bus in Syria. We are not likely to know their names or host a remembrance.

I am also heartened by the responses to the atrocities. There were numerous accounts of Muslim taxi drivers offering people free rides home. I’m proud of the Muslim doctors and other medical staff that treated the victims. I admire the Muslim caterers and volunteers who were on the scene the next day to offer free food and help to those who need it. I’m pleased with all the #Muslims for Manchester organisations who have set up charity sites to help the families affected and those that donated blood. I’m encouraged by the spirit and generosity of all those fellow Mancunians that came together stating ‘Not in Our Name’ and stood shoulder to shoulder. As one person tweeted me:

“The Muslim community here been fantastic, I feel for those who receive abuse, love will shine through in the end.”

This gives me hope.

Sadek Hamid is author of Sufis, Salafis and Islamists. He is a senior researcher at the University of Oxford and is a Manchester resident.