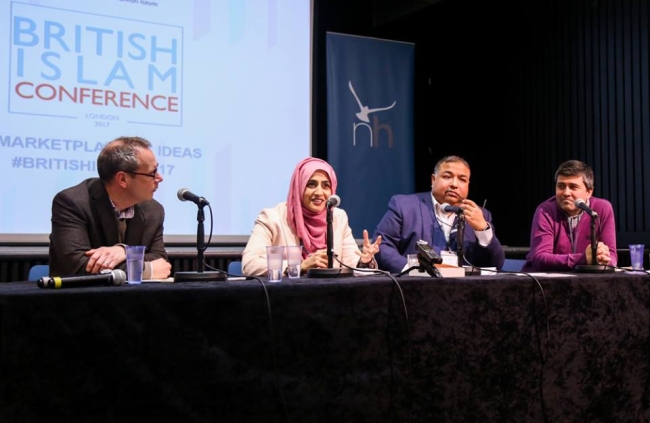 The second British Islam Conference (25-26 February 2017) discussed disability, domestic violence, interfaith relations, and the persecution of Ahmadis as well as the experiences of black Muslims, lesbian, gay, bisexual and transgender (LGBT) Muslims, refugees, and other hard-hitting topics. Kicking off the conference was an inspiring keynote address from the acclaimed religious scholar and writer Karen Armstrong. But perhaps the panel that provoked the most discomfort and divided the audience was the one that asked,

“How should we talk about integration? How can British Muslims help to change the integration debate in Britain?”

A suggestion by Rabiha Hannan, panellist and co-founder of New Horizons in British Islam, that Muslims in Britain need to do more to provide positive images of integration met with strong audience criticisms. Integration with what? At whose expense? By whose standards? To many, it sounded almost like pandering to the Far Right’s – and to a significant extent the British state’s – scapegoating of Muslims as potential terrorists or extremists-in-waiting.

I empathised with both positions but they also left me unsatisfied. I kept being reminded of the civil rights debate in the US of the 1960s, specifically Martin Luther King Jr’s call for African American “integration” and Malcolm X’s disgust with “integration-mad Negroes”. I grew up inspired by these two men but troubled by their disagreements. I’ve always wondered, in the end, whether the semantics were worth the acrimony – in 1965, on the cusp of discovering a deeper connection with Islam, Malcolm was assassinated by members of the Nation of Islam, the group that nurtured and empowered him; three years later, Martin was killed by the white supremacist James Earl Ray. In case the irony hasn’t sunk in, let me emphasise it – Malcolm X, the separatist, pan-Africanist Muslim, was killed by the separatist black movement he once led, while Martin Luther King Jr, the pacifist, bridge-building Baptist preacher, was murdered by someone from across the racial divide.

I’m aware that analogies shouldn’t be overstretched. Unlike the majority of African Americans, most Muslims in Britain were not forcibly brought in en masse on slave ships. But many of us would not be here if not for the divide-and-rule policies of the British Empire. And many British Muslims are disadvantaged by structural injustices in the fields of employment, education, media representation and access to healthcare.

To me, though, fixating on finding a “proper” definition of integration – or demolishing it – does not effectively help to solve real-life problems. Partly because that’s not how Muslims in Britain – in all our diversity – live our lives. As a Malaysian-born Muslim from a middle-class background, I find myself willingly “integrating” or even “assimilating” in some situations but not others. I’ve fallen in love with Marmite but I still find rhubarb disgusting. This might seem frivolous, but aren’t our everyday experiences a combination of the trivial and the profound?

And jokes about Marmite and rhubarb with some of my “liberal” white English acquaintances have sometimes led to heated arguments about the supposed merits of the British Empire and the fantasy that at least it brought people like me good transport, hospitals, schools and – wait for it – my superb command of English. In those instances, I swiftly go from happily integrating to hammering home anti-colonial criticism.

The ultimate test, however, is whether my political convictions are seen as disloyalty – “If you don’t like it, why don’t you just go home?” – or as valid dissent – “Well why don’t you just join the Socialist Workers Party?” To me, the real test of integration – no matter how you want to define it – is whether Muslims in Britain can freely express dissent like any other citizen without it being interpreted as disloyalty. At the moment, it sounds like the political establishment still regards Muslims as a fifth column, not dissimilar to Catholics in the seventeenth century – think Guy Fawkes and the Gunpowder Plot.

But that’s coming from me – a non-British Muslim for whom London has become home. And my own battles and joys are influenced by my relative privilege as a middle-class male with a doctorate. Not everyone has what I have, and I would never dream of speaking on behalf of other Muslims who are of markedly different backgrounds.

What I’m also getting at is that words like “integration” – and its flipside, “conformity” – infuriate me when they’re imposed by other people. This isn’t just with the wider white, non-Muslim British society, but within many Muslim spaces as well. I am filled with similar revulsion whenever I’m expected to condemn homosexuality or feminism just because I’m Muslim and I have to defend my so-called ummah. And I’m deeply disturbed when, in the rush to integrate or conform, some people decide it’s OK to throw inconvenient Muslims under the bus – from Salafi women who wear the niqab (face-veil) to twerking hijabis.

I don’t have a solution for the integration debate. But I do hold onto my respect, frustration and occasional fear of Malcolm and Martin. I focus on the moments in which they began to challenge themselves – for example when Malcolm discovered a new way of being Muslim during his Haj. Or when Martin told Harry Belafonte:

I’ve come upon something that disturbs me deeply…. We have fought hard and long for integration, as I believe we should have, and I know that we will win. But I’ve come to believe we’re integrating into a burning house.

These moments of self-criticism and self-revision in both Malcolm and Martin before their tragic deaths tell me that there must be a better way. If I am not smart enough to figure it out for myself right now, then I need to pray for Divine guidance, get mentorship from those I trust and respect, and be open to learning.

Finally, it’s not a bad thing to lighten up sometimes. Take a look at this clip of the brilliant British comic Imran Yusuf:

Ask yourself if his act is pro- or anti-integration, or neither, or both. Then ask yourself, with comedy this good, why this clip is from the BBC Asian Network? And try to remember the last time you saw him on mainstream programmes like Have I Got News For You?, or 8 Out of 10 Cats. (And no, I don’t even know the guy, so I don’t have a reason to plug his latest film, Finding Fatimah.)

Shanon Shah is a sociologist of religion who teaches at the University of Kent and is deputy editor of Critical Muslim.