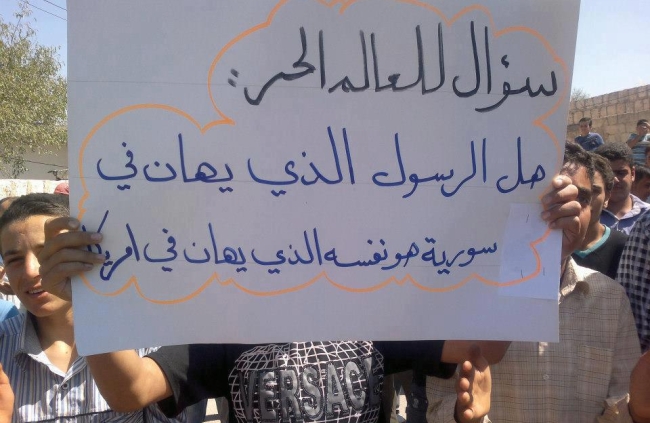 This video is not suitable for children nor for those of a nervous disposition. I include myself in the latter category. At first I couldn’t watch it, then I made myself do so in order to hear the words. Before the usual “Freedom? You want freedom?” the torturee is forced to declare that Bashaar al-Asad is his ‘lord’ (the Arabic word ‘rabb’, which means God). The violent (but very small) protests which have swept the Muslim world in response to a ridiculous low-budget smear of the Prophet Muhammad are in part the expression of a deeply humiliated people who remember Western support of Zionism and Muslim dictatorships, Western invasions of Iraq and Afghanistan, and so on. They are in part the result of the failure of Arab and Muslim dictatorships to build functioning education systems, and a symptom of a profound and generalised despair that requires wounded symbols through which to manifest itself. Most importantly, they are signals of an opportunistic power play by the extreme right-wing Salafist minority. It’s a case of extreme right-wing Islamophobes, Zionists, Coptic extremists and American Republicans on the one hand and extreme right-wing Islamists on the other, feeding off each other. The furore has made the ridiculous anti-Islam film a Youtube hit. Nobody would have heard of it had Egyptian Islamists not publicised it, and had the American ambassador to Libya, apparently a friend of the Arabs who was critical of US policy on Palestine, not been murdered. As with all the episodes in the ‘culture wars’, it’s an enormous diversion from the really serious issues. The torture video here was first pointed out by the Syrian activist Wissam Tarif. He asked a simple question. Where are the furious demonstrations against this blasphemy? Why have no Syrian embassies been burnt following the repeated bombing of mosques and churches, the murder, rape, torture and humiliation of tens of thousands of Syrian Muslims?

Here are some Syrian responses to the mess. Here’s Libyan novelist Hisham Matar on the violence in Benghazi. Here’s Matt Duss on the Islamophobic entertainment industry. And here’s Hamid Dabashi drawing lessons from the Iranian revolution. (The Syrian regime, meanwhile, organised its own small demonstration against the film. These people have been taking chutzpah lessons from Zionism).

Robin Yassin-Kassab is a Muslim Institute Fellow, the co-editor of Critical Muslim and the author of The Road From Damascus, a novel published by Hamish Hamilton and Penguin. He is also the co-editor and regular contributor to PULSE, recently listed by Le Monde Diplomatique as one of its five favourite websites.