It may surprise you to learn that it was the British who introduced the modern Madrasa to India. What’s more, it has been revived by the last Marxist government of West Bengal, which is actually predominantly Hindu. Now it is a reinvigorated institution called Aliah University for the benefit of Muslims Education. The WB Act XXVII of 2007, passed by the state government, made this possible.

The exciting surrounding this venture has been dampened by an issue that arose during the development of this unique institution. The Mullahs do not like the name Aliah University and are agitating to retain the original name Aliah Madrasah. Perhaps they should call themselves Mad-rusher! 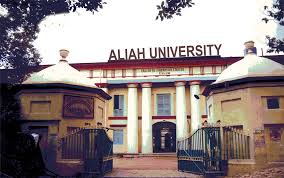 Aliah Madrasah, also called Calcutta Madrasah, was established by Warren Hasting, the first Governor General of India in 1780. Hastings himself called it Mohammedan College of Calcutta. In theory the family of the treacherous Nawab Mir Jaffar was in power but the British actually ran the administration of the country in all but name. Their main interest was that as a stable colony it should yield them a large enough income to fill their coffers in England. Initially the College taught Arabic, Persian and Muslim Law and issued certificates of efficiency. These were used to determine which vacant posts of officers for running the revenue collection and judiciary could be filled. Within decades Arithmetic, Astronomy, Theology, Natural Philosophy, Law, Logic, Rhetoric, Grammar, and Oratory were added to the curriculum. In 1821, the first Annual Examination was held in the presence of the great and good officials of Calcutta. A medical class was created in 1826, which was transferred to Calcutta Medical College that was established in 1836. However the facility to study medical subjects by the Madrasah students in the Calcutta Medical College was retained. Even by modern standards Aliah Madrasah was a pioneering institution hardly to be found elsewhere at that time. Though the authorities tried to introduce the teaching of English, students showed little interest in this. Efforts to make English the language of currency were hampered due to the fact that all administrative affairs were conducted in Persian.

The situation completely changed after 1857, the year of the Sepoy Mutiny, which lead to the Muslim community coming under constant suspicion. Conversely Hindus from the upper castes were learning English and some had even converted to Christianity. Previously, Lord Macaulay had visited India and advised the British Government to introduce English education to produce anglicised Indians who would go on to administer the country in a very British way. British influence was being extended into vast areas of the country. The establishment of the Calcutta University in 1857 created a precarious position for the Aliah or Calcutta Madrasah. There were proposals for its closure. The British Authority in India allowed it to continue to function but gradually changed it into an ordinary High School side by side with a traditional Madrasah teaching Arabic and Sharia Laws.

The buildings of the newly set up Aliah University are located in the Rajarhat Complex outside Calcutta. All modern subjects are taught up to Postgraduate level and Doctorates can also be awarded in a range of subjects. Management and Information Technology also form part of the Curriculum. The university should be a source of pride. With great regret I have to say that most Muslims of West Bengal do not view it this way. The preponderance of Muslim educational institutions in rural areas, which are very basic Madrasahs or Moktabs, (Primary Schools) has not nurtured a forward-looking community. I can only hope that this stagnation in their world-view will come to be challenged by the existence of Aliah University and the institution will come to be appreciated for the great potential it can bestow.

Mohammad Soukat Ali is a Fellow of the Muslim Institute. He was born in 1942 in Khidirpur near Kolkata, West Bengal, India. He graduated in Agricultural Science in 1963 from Brila College of Agriculture and began his career as an agricultural officer. In 1966 he settled in the UK and worked for the Ministry of Agriculture and HM Customs and Excise. In 1971 he obtained a Post Graduate Diploma in Agricultural Economics from the University of Oxford. He retired in 2004 and now devotes his time to studying and writing about history, science and Islam.