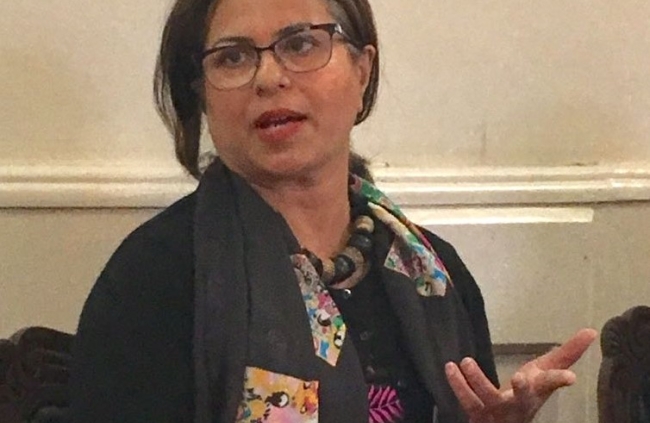 Sometimes the dreams that come true are the dreams you never knew you had hidden somewhere deep down in your subconscious. The dream of an Akhuwat university was also being nurtured somewhere in that space in another day and time.

This dream was first stirred twenty years ago in America, when I visited Monticello. Monticello was the residence of America’s third president Thomas Jefferson. On a plaque in Monticello are inscribed these words, “I remained America’s President, but it is my wish that I be remembered as a person who founded a university”.

America’s noted University of Virginia was established under his patronage and guidance. If one is to bring short-term change, then provide a poor person with capital to start their business. But if we aspire for lasting change, then we must yoke his relationship with paper, pen and book. This was a vision of an educational institute where education is not considered a business, where those aspirants study even if they lack the means to pay the semester fee. All have the right to higher education of standard.

These excerpts are taken from Akhuwat Foundation’s founder, Dr Amjad Saqib’s book: Akhuwat ka Safar – A Journey of Hope, written in Urdu. Of course, the words have greater depth and meaning in the original language they were manuscripted in, as I’m sure the words would also be carrying the weight of dreams of many million children and their parents. I’ve but translated them and you are reading a mere translation. The ground reality is quite grim and surely, it could only be experienced whilst one is on the same ground and is speaking to these people face to face. I’m also sure some would hear these echoes as whispered into the ears of their souls. It’s those of us, who dream of and fight for an equitable and just world - A world without poverty. A world where education should be given to every child as their ‘basic human right’, in Saqib’s words.

Akhuwat's Founder, Amjad Saqib, firmly believes that Education is a vital component of bringing change to any society. Educating the masses will allow us to change perceptions and alter the paradigm. Now, more than ever before, in developing this new narrative education and knowledge will play a significant role. Education, from a skills-based approach, will have to move towards a more strategic and experiential one with a focus on research rigour, in order to arm the professional and organisation with knowledge that would aid in, not only, fulfilling market needs but creating market needs and benefiting society.

This proposed new paradigm shift could only take place once we inculcate a spirit of solidarity and brotherhood, in our youth to play their vital role in society-building by being more inclusive and compassionate towards deprived segments of society and make them a part of this solidarity movement of Mawakhaat (Brotherhood).

Advocating the sanctity of education, he further proposes; “If one is to reduce the provision of education to a mere business venture, then it is far better to pursue something else.  The realm of knowledge must remain sacred”.

Hence why he emphasises the need for an institution which not only teaches how to be more useful in the society by earning a degree but also works on character-building something we refer to as Taleem-o-Tarbiyat - instilling the spirit of compassion and local wisdom.

Akhuwat envisions an equitable and just society and this can only happen by providing people with equal opportunities to finance and education.

This could be the world’s first university made in partnership with the common man/woman.

After providing INTEREST-FREE loans to over two million families all over Pakistan, Akhuwat is now focusing on offering FREE education to the deserving yet talented students who fail to continue their higher education due to lack of access to resources and funds.

In Saqib’s words; If loans without interest can triumph, then so can education without huge fees.  The model of solidarity is before us; it just needs to be repeated.

But how would this university be established?

For Saqib, “Idealism is the name of the unyielding passion one adopts in life”

Akhuwat University is one such passion, such stubbornness.  How will this stubbornness come to bear fruit?  Had somebody asked me this question 17 years ago, I would perhaps not be able to answer.  However, the story of Akhuwat has now become the answer to many such questions.

In the first stage, Rs. 500 million ($5 million) is needed for the building. Akhuwat’s board members came up with this idea of selling bricks and suggested, if one brick of this university is to be valued at one thousand rupees ($10), we need to sell five hundred thousand of these to have the university building elevated.

Why are we collecting funds to build a University in Pakistan?

As part of my work with Akhuwat as well as bridging the knowledge gap between Pakistan and diaspora community here in the UK, I felt the call to lend a helping hand as I passionately believe in Akhuwat’s philosophy. This belief has been reinforced many times over. For example, when I organised a UK-wide Roadshow for Akhuwat UK in June, during Dr Saqib's visit. We had many endorsements but one very valuable one came from none other than Dr Timothy Winters aka Shaykh Hakim Murad, during our visit to Cambridge Muslim College. He welcomed Akhuwat University initiative by endorsing this as a very noble cause.

Akhuwat's Qard-e-Hasan (Interest-free loan) model has proven to be phenomenally effective in lifting people out of destitution and despair. As endorsed by Lendwithcare, as Akhuwat's UK partners, in collaboration with Portsmouth University have published their Impact Assessment report recently which could be seen here.

Their philosophy of extending solidarity (Mawakhat) and their approach of creating 'virtuous circles' is of great significance bringing societies and communities together. The thought of facilitating a young child to translate their dream into reality through educating themselves is quite wholesome. We wish to draw on these virtuous circles of solidarity around the world by asking you to be part of our solidarity movement.

The project has moved beyond the blueprint phase. The first critical step has already been taken from Akhuwat’s own resources and donor’s benevolence. The land has been acquired in Kasur, bordering Pakistan’s academic and cultural capital, Lahore. The project cost of the first phase of construction is estimated to be 500 million. A campus is already in operation in the industrial city of Faisalabad, with emphasis on cutting-edge technology related programs. Initially, it shall have two disciplines, with gradual expansion to a full university status.

It is our resolve that by August 2018, the university welcomes its first batch of students at a campus. It is also our resolve that only a nominal fee would be taken from students. There would be no conflict, coercion or financial requirement. Ideally, parents will give according to their means at the university's bank account. Those who can afford just a rupee may give just that; those who can afford a hundred thousand, give an amount commensurate to that.

Akhuwat University will be the first of its kind - A fee free residential university where students from all over Pakistan will be selected on merit and provided free quality higher education.

Our Campaign on The Upeffect

It is my resolve to share this courageous act as far and wide as possible, hence I have designed a crowdfunding campaign in partnership with The Upeffect, a crowdfunding platform.

Our campaign has been running for 3 weeks now and we are in need of more people to know and partner with us in laying the foundation of an institution which holds the key to emancipation from poverty by institutionalising the spirit of Mawakhat (Solidarity) with the lesser-privileged strata of the society in Pakistan. Akhuwat’s 17 years of social research will result in producing the desired societal transformation.

By buying a Brick for Akhuwat University for just £20 you contribute to a global solidarity drive of supporting higher education for lesser-privileged youngsters. Each buyer of 10 bricks or more will have their name inscribed on THE WALL OF BUILDERS.

Such a deed is an incentive by itself, but one's name chiselled alongside those who helped build a Sanctuary of knowledge is recognition worthy of the gesture.

Our campaign page can be viewed here: http://bit.ly/akhuwat_up

Our campaign video can be seen here: https://youtu.be/rxY_7Y18A9g