Orphans of Modernity and Broken Pens 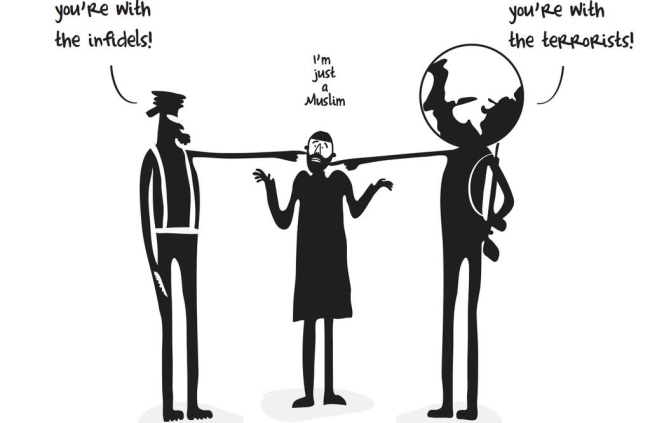 Two brothers wrought unspeakable violence against their own fellow citizens in the streets of Paris. Victims included journalists and police officers whose lives were extinguished by gunmen who sought to defend the honour of the Prophet Muhammad. To the contrary, neither this deed nor the very notion of defence underpinning it can credibly stand up to the exacting scrutiny of the consciences of Muslims and non-Muslims alike. The founder of Islam does not need the acts of Cherif and Said Kouachi to avenge any wrongs, alleged or actual, on his person by the satirical magazine Charlie Hebdo. Instead, the events of last week have only served to add more fuel to the fire of the demonisation of Muslims in Europe and elsewhere.

Artistic expressions in the form of caricatures, playing up to bigoted stereotypes, need to be challenged in the fields of the written word or illustrated picture. Force of arms can only engender an illusion of victory on the part of the perpetrators, while observers stand by aghast, and continues to fan the increasing Islamophobia intertwined in the rise of far right political parties and movements in Western Europe such as the English Defence League, Marine Le Pen’s National Front and Pegida and its vociferous anti-Islam protests in Germany. Fear will only beget more fear: particularly that of the ‘other’.

The idea of self-redemption or spiritual cleansing through violence found in the writings of Franz Fanon was inspired during the epoch of French colonialism with no mask disguising the abysmal cruelties meted out to the ‘natives’ in Algeria. 132 years of the French occupation of Algeria introduced a new dynamic of colonial relations. Land confiscation, repression, settlement of European colonisers and disenfranchisement leading to the deracination of the Arab and Berber indigenous populations aimed to make Algeria an integral part of France. Force was the order of the day. Between 1954 and 1962, the FLN (the National Liberation Front) declared a war of independence. Blood was spilled in a cycle of violence and counter-violence. French authorities responded in what became widely known as ratonnades (rat-hunts). The native and vermin were synonymous in the determined effort to end the aspiration for independence and freedom, istiqlal and huriyya.

Fast-forwarding to the present moment, France no longer occupies Algeria and immigrants from Algeria have long made the former colonial metropole their home. Algeria has managed to survive, albeit with deep scars in its social fabric, a brutal civil war during the 1990s. The past appears to be a blurry recollection. Nonetheless, the past persists in undeniable and unconscious ways. Attempts at the deracination of the colonial subjects of Algeria were accompanied by the erosion of traditional social networks in the city and the countryside. The kinship ties generated and sustained by the tribe or clan previously grounding individuals in cordial and peaceful relations with others, notwithstanding its patriarchal dimension, has over the decades given way to hyper-masculinities or more precisely a culture of machismo not found in Islam, cloaked in apparent secular and religious symbolisms.

Hitherto, Sufi brotherhoods channelled the energies and cultivated the moral senses of the young and the aged of the Muslim faithful. The voice of Ibn Arabi was heard in the cities and countryside of Algeria, inspiring chants in Sufi gatherings among those who claimed to be his direct spiritual descendants. Abd al-Qadir al-Jazairy, best remembered for his valiant resistance to early French colonialism, had a close spiritual affinity with ‘al-Shaykh al-Akbar’ (the Greatest Master). In exile, he came to the rescue of thousands of the Christian inhabitants of Damascus in sectarian riots striking the ancient city. Neither tribal nor particularly Islamic, the violence recently acted out in the streets of Paris was frowned upon by the former and not sanctioned by the latter. The fallout of the decline of these social groupings could not have been mitigated by the alternatives offered by the narrowly defined one-party nationalism in the post-independence period of Algeria after 1962 or that of the shantytowns and later deprived residential suburbs of the banlieue in France. One could argue that the colonial alienation of Algeria has continued unabated into the twenty-first century in the rise of a local ‘comprador’ class enriching itself while dire poverty grips the rest of society.

Social deprivation and cultural alienation in the banlieue from the broader bourgeois culture have made a number of French men and women seek alternative identities not necessarily, contrary to appearances, going back to their Islamic roots. The individual experiences of Cherif and Said Kouachi can be located in the wider social milieu of a bloody colonial past and a present of alienation rather than an Islam which preaches the eradication of sworn enemies. Both were born in France to Algerian parents and orphaned at a young age. In local parlance, they were ‘Beur’, a play on the French word for Arab, ‘Arabe’. A generation of rootless young men and women filled with a desperate yearning to belong appears to explain, in part, the willingness of the Kouachi brothers to fight for a cause of which they did not understand the full implications. One brother had found solace in being a rapper in the search for an identity of his own and self-expression. Not long afterwards, Cherif Kouachi would be imprisoned in 2008 on charges of belonging to the ‘19th arrondissement network’ which recruited and sent fighters to Iraq. He himself was on the verge of leaving for the country.

Acts of brutal violence mask the unconscious and often unrecognised nature of violence: no such cleansing effects occur. The protagonist is not liberated. Instead, the old tyrannies persist and become part of the aggrieved self. There is no wiping the slate clean. From Marxism to Liberalism, the power of human agency to destroy the old and effect the new is a sacred cow of sorts. In the Zeitgeist of the age, primacy is awarded to the unadulterated will of human agency, nobility of purpose in the act is expediently jettisoned, whereupon the ends justify the means. The grand narrative of creative destruction bursting forth from modernity has borne a nihilism negating both life and the creative spirit of human beings wherein force holds hostage culture.

Pens and Inkblots versus Guns and Bullets

The twentieth century saw violence of unprecedented proportions in Europe and throughout the world. Peace has been disturbed many a time. However, the sharpest retort to war and injustice came in the form of pacifism. Pioneered by the symbol of modern India, Mahatma Gandhi drew upon Hinduism in his struggle against British imperialism. Self and other were accommodated in the lean frame of the man in his quest to question not only the values of brute force hidden under the cloak of ‘civilisation’ but also the position of untouchables in the Hindu caste system. Salt marches not violent confrontation were the means to remove the British Raj. In the same generation, Howard Thurman, who met with and was influenced by Gandhi, was a forerunner of Martin Luther King Junior’s electrifying spirit of freedom in Jim Crow America.

Racism for Thurman and King could not be tolerated as the status quo. The ‘disinherited’ were to be lifted up through the positive affirmation of ‘life’ not the ‘ghetto’ or ‘suicide’.  The power of love dwarfs the love of power. Sentimental expressions are thus precluded. The American public intellectual Cornel West, author of the rousing Democracy Matters, has kept the burning embers of this ethos alive in his writings and actions, “justice is what love looks like in public”. Lessons can be learned in Europe in fostering solidarity between Muslims and non-Muslims. The written or spoken word is far more powerful and bespeaks a higher morality: that of life rather than death or a misunderstood notion of martyrdom. Interestingly, Gandhi and King were both martyred for their unflinching commitment to the elevation of their people and the oppressor for the sake of a shared existence.

In France, the immigrant experience of North Africans, including other ethnic groups from the former colonies, is over a century old with Marseille as their first port of call. Employment brought many to work in the country’s factories and mines. Thus, a proletariat of the ‘colonised’, a new class in the pecking order of a supremely bourgeois society, emerged in the metropole. Presently, France’s Muslims number over 4.7 million making up around 7.5% of the overall population. Most hail from the Maghreb. Being both North African, Beur, and French has provoked a creative response on the part of the descendants of immigrants from this part of the Muslim world. The written word has channelled discontent in an eloquent yet powerful fashion. Life has produced art. Autobiographical depictions from memory enliven Azouz Begag’s Le Gone du Chaâba (Shanty-town Kid) about a deprived shantytown housing Algerian immigrants in the changing world of a young boy born in France.

The theme of the exuberance of youth is brought into sharp relief in Le thé au harem d’Archi Ahmed (Tea in the Harem) by Mehdi Charef in a tale of the tough struggles experienced by a group of young people in a Parisian banlieue, namely revolving around the roguish protagonist, Majid. In recent years, Faïza Guène has emerged as a hopeful voice of the banlieue in her vivid accounts of love, friendship and family life in direct opposition to stereotypical depictions of les Beurs. Self-representation through the pen is an illuminating window expressing the diversity in unity which France is desperately trying to preserve in the face of brutal violence and racism, whether Islamophobia or anti-Semitism. The horrendous events which brought together Parisians and French people in a show of solidarity in a million-man march on Sunday reflecting the rich diversity of France point not only to the defence of the freedom of expression but also the refusal to succumb to fear. Inkblots should be spilled in the building of bridges rooted in social justice between the various communities (Muslim, Jewish and others) who call home the land of Liberté, Égalité, Fraternité.

Dr Mohammed Moussa received his doctorate on renewal in the Islamic tradition from the University of Exeter. He is a Muslim Institute Fellow. One of his chief interests, among many, is the Arabo-Islamic heritage as part of a broader and richer experiment called humanity.