In the 1980s an artist friend of mine made a poster for Gulbuddin Hekmatyar’s Hizb-e-Islami, a militia later allied with the Taliban. The poster depicted a fully-bearded Afghan mujahid clutching Quran and Kalashnikov and standing atop a slaughtered Russian bear. It was sent as a postcard to British journalists and politicians, without controversy.

In the same period I remember reading stories in the mainstream press about the Mujahideen’s poetic love of flowers and song. After the Russian rout, these Mujahideen committed excesses so extreme that it took Taliban puritanism to re-establish order. Then the Taliban committed their own excesses, of a different sort, and after 9/11 the West waged war on them for metonymic reasons. Nobody now celebrates the gentle, flowery qualities of these men who have burnt schools and lynched television sets.

“Poetry of the Taliban”, therefore, is a brave and very useful project. It offers the reader a perspective on the conflict through the Other’s eyes. It offers the human element, and as such is worth more than a library-full of cold analysis. 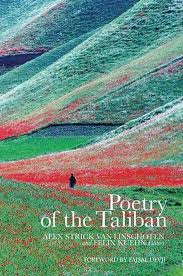 There are poems of love, battle, transience, grief, enthusiasm, material deprivation and mystical astonishment. The voices are diverse and often surprising. Faisal Devji’s preface points out that the poetry displayed here is not the official product of the Cultural Committee of the Islamic Emirate, not centrally-organised propaganda, but the efforts of men (and a woman) who fight for a variety of reasons, tribal, ethnic or nationalist, and particularly out of gut resistance to foreign occupiers, wherever they come from.

At its simplest or crudest the poetry describes a pastoral idyll and an innocent people spoiled by the dread hand of foreign-brought war and Western technology (the mobile phone, for instance, suffers harsh criticism). Some of it is propagandistic, most isn’t – in truth it’s hard to draw a line, as poetry inevitably reflects its authors’ perceptions. The emotions are true in the poets’ hearts, and in those of their original audiences, even if they appear strange to Western minds.

But a great deal of this Taliban poetry will be comprehensible to Western readers who are unable to understand Taliban ideology. The major themes are recognisable, even universal, and the dominant form is the ghazal, or love lyric, which links the Pushto language to the classical civilisations of Persia and India and to the mystical tradition of ambiguous imagery in which wine and the face of a beautiful woman may or may not symbolise divine ecstasy and God.

The poems describe a land of mountains and pines, each stone a ruby, each bush a medicine, and of laughing blossoms, dancing tomorrows, of twilight arriving with its lap full of red flowers (the poem called “Sunset” reads more like a product of a Zen monastery than of a Deobandi madrasa).

What is so interesting is that the Taliban’s official face and past practice has been so fiercely anti-Sufi, anti-historical, and seemingly anti-culture. This book provides an entirely different outlook. Indeed, in their rich memory of 19th Century British invasions, of Afghan folklore and Islamic heroism, the Taliban poets seem more awake to history than we are.

As well as raillery and satire against the foreign enemy and its local servants, there is self-criticism aplenty. “Humanity has been forgotten by us,” writes one poet, “And I don’t know when it will come back.”

The book’s complex interplay of modernity and tradition, puritanism and sensuality, parochialism and globalism, is fascinating; and many of the poems are fascinating in their own right, as works of art.

Robin Yassin-Kassab is the author of The Road from Damascus, a novel. He is a Fellow of the Muslim Institute and co-edits their quarterly Critical Muslim, www.pulsemedia.org and blogs at www.qunfuz.com.

A shaved version of this review appeared in the Guardian.

The original version appears at www.qunfuz.com