A Pilgrimage to Masjid Ibrahimi 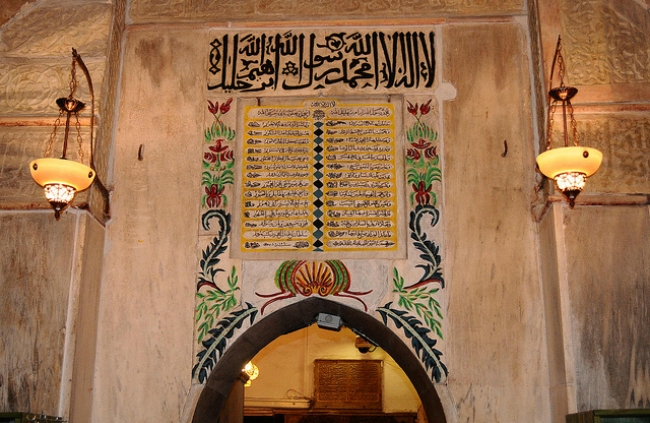 To the Palestinians, the city is and will always be Al Khalil, the place associated with Ibrahim Khalil-ul-Lah, the friend of Allah and the first Muslim [according to the Qur’an]. The rest of the world knows it as Hebron, as old as Jerusalem if not older, and the place where Patriarch Abraham and his immediate family lie in eternal peace.  I first came here in 2007. The place was under intense pressure by the Israeli Military and the Settlers. At the time the good people of CPT [Christian Peacemaker Team] chaperoned us through the dead section of the labyrinthine old souq to the gate of Masjid Ibrahimi where I had to recite Sura Fatih to the Israeli soldier to prove my muslimness, before being allowed to enter the precinct. Inside, I remember the air of desolation. No worshippers or visitors except for a solitary Waqf warden. Not so this time.

It is December 2011 and I am traversing the holy land on my own. The Israeli occupation is less brutal, or so it seems. Some checkpoints have been removed; others are relaxed. They still make the Palestinians get off the bus at every checkpoint but do not search. During my travels, I do not witness the ritual humiliation (except on one occasion as I exit from Bethlehem) that used to be the norm up and down occupied Palestine. The Palestinians keep telling me it is all an illusion. They can clamp down any moment they want to because the world is at their feet.

The bus from Bethlehem I get on is old and rickety but the driver is helpful and points me in the direction of old souq. Some shops in the abandoned part of the souq are now open and I do not see armed Israeli soldiers loitering around. The mosque complex lies in the part of Hebron the Settlers have occupied and its surround is deserted. The Israeli checkpoint at the entrance to the mosque is not so menacing and I am not asked to recite a Qur’anic verse to prove my muslimness. Inside, there are people who have come for Zuhr prayers and I see a large group of men of Indian complexion and women in headscarves, pilgrims like me, milling around, some reading Qur’an, others busy with their video cameras. After a while, I cannot resist and ask one of them which part of India his group is from. “Mauritius”, he says and I am transported to tales of ‘Jahazi Bhai’ by Reza Ali Abedi.

I wander and offer prayers at the tombs of Prophet Ibrahim Khalil-ul-Lah and his wife Saira, and Prophet Ishaq [his son] and Ishaq’s wife Rafqa. The area where Prophet Yaqoub and his wife and Prophet Yousuf and his wife are buried now are not accessible to Muslims. As I sit on a stool to rest my creaking knees, in wait for As’r prayers to commence, a voice gloriously serene and melodious, rises from my right. And time stands still. A nondescript man, sitting legs crossed, starts with Sura Fatiha and continues with Sura Ikhlas. The latter he recites, again and again, in a different tone each time, mesmerising us all. The experience is transcendental and unforgettable.

The Muslims of the Indian sub-continent seem to have forgotten the Islamic heritage in Palestine. The towns and villages and hills, the Prophets mentioned in the Qur’an traversed in  exercise of their ministry,  Nablus, Al Khalil, Jericho, Bethlehem, Jerusalem to name but a few, are a reminder of the roots of our faith. In Jerusalem the place where Omar [the second Caliph] accepted the surrender of the city has not changed much. The Rock from where the Prophet is said to have ascended on his celestial journey is there under the dome to this day. And that makes me wonder why it was that the Messenger of Allah had to come to Al Quds before he could be near the Splendourous One. Allah knows.

M A Qavi is a peace activist and Muslim Institute Fellow