The Other Islam: new shoots in an old tree 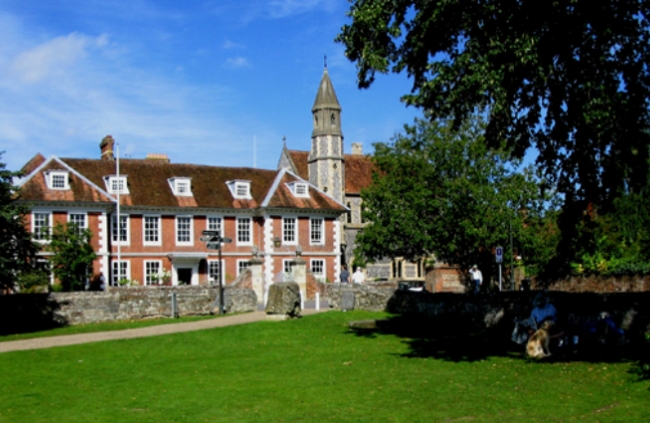 They say when unusual things happen they all happen together. A few weekends ago I experienced a chain of events which, although of greatly differing relevance, all contributed to a couple of days which were to be different and instructive in many ways.

The first thing was that I took a train. I like train journeys, but I rarely travel this way, and it gave me a bit of a thrill settling into my comfortable seat while the diesel engine noisily pulled us out of the station and slowly geared itself into speed as the houses of Wimbledon slipped by faster and faster. I somehow felt that I was onto something good.

Then I arrived at Salisbury, a cathedral town I had visited only a couple of times before as a tourist. It was dark, and trundling my little wheeled suitcase down the badly lit streets towards the cathedral reminded me of what towns looked like in England over 30 years ago when I first came to the UK. Quiet, initially, with quaint shops selling quaint products such as haberdashery and old fashioned clothes, and then busy with tourists but still friendly, homey. Through the medieval gate that introduces to the cathedral’s wide green, I was baffled as to where to turn, since it was virtually pitch black. It really felt like I was going back in time, and the fact of being slightly taken aback by the sudden uncertainty and almost disbelief that I could be in the right place gave a kind of pleasure at being left to my own devices, the rare experience, these days, of having to trust the darkness.

When, groping in the dark I arrived at the venue I was looking for, an impressive and handsome building ascribed to Christopher Wren overlooking the Cathedral itself, it was pleasing to have experienced an unusual trip and ended up in a warm and welcoming but very British environment. Coming from Italy as I do, I need to automatically adjust to the external coldness and apparent distancing attitude of the English, which many years ago gave me a sense of uncomfortable insecurity, and I am quite able to relate to it effortlessly. But as soon as I spied a group of asian-looking people in the lounge my heart opened and I greeted them with the pleasure and the inner warmth and relaxation of having found people of a common ground, for they were obviously the participants to the conference of the Muslim Institute which I had come to attend. We were soon ushered to the dining room and my personal mind-opening, brand-new, and somewhat unlikely, experience of a week-end long conference on Muslim issues started.

In case you are a European non-Muslim you need to know that being a Muslim means being part of a community, where you are welcomed even if you are not considered to be part of the faith. As soon as I entered the large refectory room where the about 50 participants were settling at their tables I was unexpectedly invited by a group of 5 men to join them, and was from then on considered to be a part of their conversation. Almost immediately the talk veered to spiritual subjects. But i was almost shocked when one of them said: “if you were to choose a religion not based on the beliefs but on its capacity to look after you which would you choose?” And the guy opposite said: “Mormons”. “They are very well organised,” he continued “they don’t drink or smoke, they look after their own, and they are quite wealthy”. Another disagreed, declaring that this was in any case not a good basis to choose a religion; and I felt a bit better, back on track. But the capacity to reason in such rational terms, during a friendly conversation over dinner among virtual strangers, and by implication taking on board the fact that all religions have a value since they all ultimately tend towards God, I thought was admirable in people who are anything but academics with degrees in comparative religions. I sat back and listened, immediately at ease.

My interest in Islam goes back at least a couple of decades to when I started reading about the flowering of culture, art, philosophy, writing, in the rich and multicultural era of the islamic rule over Andalusia; to when I discovered the fundamental input of islamic scholars into the transmission and development of Greek culture during the middle ages; to the period when I was planning a documentary on that extraordinary personage, Frederick II, Catholic Emperor of the Holy Roman Empire, who had been excommunicated by the Pope for befriending Suleiman, the Muslim leader in Jerusalem, and kept 1000 Muslim Arabian archers as a bodyguard. My first Qur’an in my library was acquired in 1992. But I knew little of Islam’s way of life, and assumed it was little different from my own, western, Mediterranean, Italian. In spite of the fact that every time I had travelled outside the western world I had always felt as if I was able to breathe more freely.

More recently, having met some Muslims and made some friendships, I became aware of the deep-rooted kindness, generosity, balance, and ethics which are at the basis of the islamic culture. I was so impressed that i started attending weekly hadiths (lessons) explaining the Qur’an in private homes located over an hour’s drive away, which enlightened me on Islam’s universality, practicality and peaceful approach to living. Going to hadiths still inevitably leaves me with a gentle feeling of contentment of having been a part of a heightening of the soul together with the others at the meeting; and it consistently puts a lasting smile on my face. No doubt Islam is the closest conception of God that I have encountered in my way of attempting an explanation of the mystery of creation.

But religion is not my forte. I abandoned Catholicism when I was 14 and never looked back. However, the profound sense of genuinely felt sincere following of ethical principles, with all the human exceptions to be expected, and a life-system based on the principle that God is the origin of every act in life has led me to believing that Islam must be the most powerful potential moral force on the planet today; capable of giving  leadership and inspiration for the everyday, practical dealings with life. I am sure our western world could learn and benefit hugely from a greater amount of interaction with this environment.

But to return to Salisbury. Islam has a controversial image in the West. And although my personal experience, both in the UK and during my many trips abroad has always been positive, I have been bombarded, like everyone else, with all the alleged evils of Islam, from 9/11 onwards. The only tenable conclusion that I had drawn was that Islam had some areas that were antiquated, tied to ancient cultural hang-ups mostly derived from the original cultural environment in which it had developed. So it was a welcome discovery to find that there is a reforming trend in some sectors of this expanding and very diverse society which stretches from Indonesia to the USA. One of these centres of reform is the London-based Muslim Institute which had gathered in Salisbury a group of academics and religious people to discuss the role and the position of men within Islamic society today, one of four such gatherings, with different themes, which have started in 2009.

In the three days that followed I was given a confirmation of the fundamentally positive and humane approach of the teachings of Muhammad and the Qur’an. Professors from Miami, academics from Iran, lady Imams from Germany, and the many interventions of invited schoolteachers, professionals, scriptwriters, artists and civil servants, who were asking questions, contesting, adding ideas and points of view showed me, with their arguments and demonstrations but much more with their approach to the subject, with their evident knowledge and with their consistent, almost unconsciously liberality their encompassing and cosmopolitan approach to their beliefs and, in direct consequence, to life in general.

The problem is that this is the other Islam that nobody in the west knows about. And it is as much the fault of the Muslim community as of our own prejudices and ignorance. For how can we, members of the all-pervading western culture, be able to focus away from the clearly abhorrent but entirely un-Islamic issues of terrorism and the stoning of homosexuals if we are not made aware of what Islam really is. We in the west are so used to political, financial, cultural messages being hammered into our heads by advertising and indoctrination which is so loud and strident that our ears have been blunted to anything which is somewhat soft, delicate, whispered or simply “there”. But Muslims have so far been unable or unwilling to make their voice heard.

Now over the years I have read a number of books on Islam and recently some interesting articles on the new Muslim Institute quarterly magazine Critical Muslim, which have told me all about the needs, the worries, the problems, the solutions and the hopes that Islam is and has been confronted with and is living through. But i am no sociologist, I have no qualifications to comment usefully on the theories. What I know is what I see. And what i see when I discuss with a member of the institute, or talk to a Muslim friend, or when I interact with Muslims in Southall or in Beirut or in Morocco I consistently get an image of down-to-earth, sensible people with a surprising level of knowledge and a higher than average sense of respect, kindness and tolerance, and humility. Characteristics which contradict the western image of Islam entirely.

So listening to my fellow-guests in Salisbury discuss masculinity, marriage restrictions, homosexuality, and the argued need to go back to basics in order to make a leap into the present and face the future gave me an increasing sense of warmth towards this old, venerable, very practical and very elevated set of principles which have been in some cases, in some geographical areas, fallen victim to the age-old destiny of the “word” of holy men: the deadening weight of  misrepresentation by  the priestly classes that have followed all great spiritual initiators.

Beyond the welcome and probably overdue internal clarifications within Islam itself, the feeling that it may be on the verge of a reforming process is extremely interesting in my view. Because its success would open the road to a badly needed dose of ethics and morality to be injected into western society. And this I find very exciting. It is a difficult task, and one which will be slow to come to fruition. It may be only a dream. But the Muslim institute and its allies are showing that the potential is there. Let’s see if it is able to make the next step and start a process of disseminating its work into the outside world.

Brandino Machiavelli is a retired documentary filmmaker who now works in business development consultancy. He is writing about his experience at the Muslim Institute 2012 Monthly Gathering: Men in Islam.