Osama, Obama and the rest 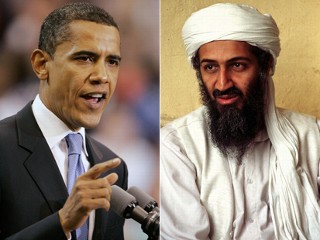 It has worked as the proverbial shot in the arm for Obama’s fledgling position in the opinion polls especially in view of the Neo-Conservative onslaught for allegedly being inexperienced and unassertive on the delicate issues of national security. Amidst a pervasive economic downturn and institutional imbalances within the US federal structure with the Pentagon and the CIA superseding all other counterparts including the State Department, such news is certainly exhilarating for the American public as it is for the US administration itself. The midnight operation in Abbottabad by Navy Seals has earned several winners across the Atlantic though the official interpretations on the circumstances keep changing every few hours.

Osama is surely dead as witnessed and affirmed by his 12-year old daughter in her interview with Al-Arabiyya Television, yet other than his immediate family and some hotheads, the biggest casualty happens to be the Pakistani security establishment, which seems to have let down its own people once again, and that too in an immensely shabby manner. Maybe, this is the microcosm of the entire Muslim world where apathetic, incompetent yet rent-seeking elite rule the roost much to the chagrin and cost of their otherwise well-meaning yet often naïve citizenry.

The American surgical operation right under the nose of Pakistan’s pampered khaki establishment in that garrison town has left Pakistanis in a deep quandary and anger. With their military and civilian leaders almost invisible from the national and global discourse, half-hearted explanation has been rather left to a mild and unsure Salman Bashir, the civil servant heading an ineffectual Foreign Office.

President Asif Zardari did try to retrieve some lost ground for his country’s khaki forces through his otherwise well-written piece in the Washington Post, yet like Bashir and many other dwellers of Islamabad’s white mansions, he equally looks like a solitary figure at a time when his country’s domestic and global credence has so insidiously nosedived. Sitting at the apex of a political dispensation, Zardari, Prime Minister Yousaf Gilani and the Parliament appear as distant and ineffective from post-9/11 realities of their country as are the landless haris in Sindh, or Osama’s erstwhile neighbours in that otherwise beautiful and peaceful hill station.

The country has never had it so bad and there is no redeemer on the horizons with the generals still hopeful of their unchallenged ascendancy within the chequered Pakistani political system and their quixotic self-belief in the enduring impact of their oft-repeated mantra of Pakistan’s strategic vitality (for whom?)

As the US is vocally airing its distrust of Pakistan’s military establishment and security apparatus, Pakistanis are certainly justified in asking pertinent questions though like many other people including the Americans here truth will remain in a short supply. As opined by Mohsin Hamid, Pakistan, following Musharraf’s hasty and unexplored decision to join President Bush’s war on Afghanistan, has already turned into an eternal abyss--“24-7-365”-- with its northwestern areas having been abrasively characterised as the eternal bad lands. As flagged by the local affectees and Imran Khan, they are fully justified in demanding an end to the drone attacks besides seeking explanations for having been scapegoated in a phony and extremely taxing war.

Did anyone in the Pakistani establishment including the fugitive general-president Musharraf, Zardari or General Pervez Kayani ever know of Osama’s esconcement amidst them, and if they did then they must be held accountable for bringing this disrepute and distrust on their nation. And, if they didn’t, then they must be running one of the most spectacularly corrupt and inefficient systems of governance and intelligence in the world, and should resign to face professional accountability.

Since the US sees retribution in the killing of Osama, it will not be injudicious on the part of world’s well meaning people to demand an end to the ongoing gory “war on terror” which has already killed countless people, especially Muslims, all the way from Southwest Asia to the rest besides many thousands having been interned all across the world on suspicion of being militants, or Al-Qaeda accomplices. Other than Gujarati Muslims, Kashmiris, Palestinians, Chechens, sovereign countries like Afghanistan, Iraq and Pakistan have been turned into war theatres with unending stories of collective murders, intermittent suicide attacks, acute societal fissures, and collapsing economies. Despite avowals to the contrary, both Osama and his counterparts from across the oceans tragically led our post-Cold War world into a new and stupendously volatile polarity between cultures, which, as per Tariq Ali, resembles a “clash of fundamentalism”.

There is a genuine reason to demand an end to the hegemonic politics of blatant occupation, brutal interventions and altruist denigration strenuously unleashed following 9/11 and for which, like Osama, ruling elites in the powerful democracies have been responsible with extensive innocent blood on their hands.

In the same vein, it is time for Muslims, especially the responsible and serene elements amongst them, to divest their religion of this hijack by extremists, so as to restore it to its pristine values of tolerance, creativity and co-existence. While individual Muslim countries including Pakistan need to be more inward looking through redirecting their precarious resources on their own people, their ruling elite will be well placed to shun surrogacy for partisan interests. They must help flourish civil societies among Muslims besides letting the elected politicians and plural groups run mundane affairs of the state. Our Ulama and Sufis must grow out of ever-limiting prisms of intolerance and takfir and here history and modernity both could be garnered to usher an overdue societal dynamism.

So while Osama’s murder has unleashed ebullience in the US and apologetic introversion in Pakistan, it can still augur a new beginning in the US-Muslim and Muslim-Muslim relationship away from the shining armour and incendiary rhetoric.

Professor Iftikhar Malik is a senior lecturer in the School of Humanities and Cultural Industries at Bath Spa University. He teaches courses on the Contemporary Muslim World, Modern Asia, US history, British Empire, historiography, and South Asian history and politics.