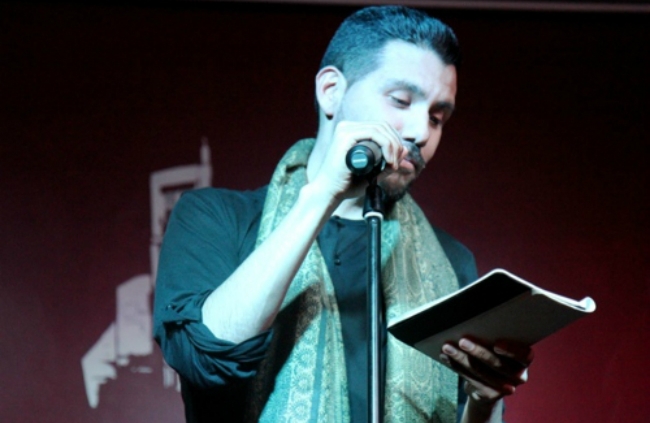 The Inclusive Mosque Initiative (IMI) is an inclusive prayer space which I was fortunate enough to come across late last year. It consists of Muslims who are very open to other approaches of worship and spiritual exercises. As such, I find myself very drawn to their activities and even contributing in my own very limited way.

Last Saturday, I attended a spiritual workshop of sorts run by Mark Gonzales. Mark is a Muslim poet who has performed for Def Jam poetry. As if that isn’t enough, he is also a visiting professor and artist in residence at the Institute of Diversity in the Arts at Stanford University. He has been described as Kahlil Gibran meets Pablo Neruda. Quite a profile, I reckon!

The event took in a community space, which felt like one of those yoga or meditation centres. This space was in a non-descript back road in Soho, amidst the touristy gift shops, overpriced cafes and West End shows and that perhaps is its only drawback. I have lived in London for ten years and would have never guessed it was there!

I expected a poetry recital of sorts but Mark delivered such an empowering session that I think the only fitting description is a ‘spiritual workshop’. It was a combination of Islamic elements with a New Age feel to it yet it did not feel strange to me at all. Mark successfully married the two traditions and produced an interesting hybrid.

We began with the Traditional Muslim prayers which Mark led. It was a good start to the evening, bowing in reverence to Allah. We would close fittingly with the next prayer later.

Right off the top, one could sense Mark’s depth. He began talking about words. What are words exactly? Sounds which carry meaning. In that sense, words have power to emote. They create realities. I was surprised by this sudden injection of an almost esoteric start but in hindsight, Mark linked these ideas to identity. Who are we? Are we defined by where we come from? How do people segment the earth and create otherness. I was reeling from the impending depth!

Discomfort began to emerge from our little circle of people when Mark asked us why we came to this event. Naturally people spoke of coming for the poetry. Others talked about spirituality but I preferred to go with a cheeky answer – I came because Tamsila (the de facto head of the IMI) told me to! I felt that broke the ice a little and Mark wasn’t at all put off by laughter. Again, this exercise was very affirming and helped us remember why we would sacrifice a warm Saturday afternoon at home to be there.

Next we were each given a piece of paper on which we wrote answers to questions which turned out to be very incisive although they may have seemed superficial to the casual observer. Not to me though. After Mark’s opening speech, I knew what to expect!

We were given time to write our answers to the first question – ‘where am I from’. My answers seemed to indicate a closeness with my country of origin (Malaysia), my affliated institution (King’s College London) and even my religious organisation (The Quranists Network). We were then told to pass our paper to the person next to us for them to use for the next question. I was suddenly apprehensive but at least glad that my answers were not too quirky. I reminded myself to keep my answers as simplistic as possible.

The next question Mark posed was the types of music each of us was into. While I do find myself humming the latest tunes from time to time (courtesy of capital FM not X-Factor!), I am extremely attached to a variety of Malay songs from the 1990s (when I left Malaysia) and way back to the 1950s (when my favourite Malay films were made). I was surprised at the emotion which crept up from this self-disclosure, how attached I was to these tunes. I had lost these tunes for a long time before the magic of youtube brought them back. Once again, Mark’s incisive question brought about another layer of self discovery. Of course our papers were duly passed to the next person.

The third question we had to answer was a more personal one – what is our greatest loss. The previous question about music had already put me in a nostalgic albeit sombre mood and so influenced my answer. My greatest loss is the life I would have led had I not left Malaysia. I surprised myself with that answer. I suppose it came because of the sudden need to reconnect to my roots. Salman Rushdie would have called it my ‘imaginary homeland’.

Naturally, with the first question asking us where we were from, the fourth question asked where we were going. I found my graduation to be the ‘place’ I wanted to go as I was tired of being a perpetual student! I also wrote that I was going to a better world, perhaps tired of the constant flurry of bad news in the last few years.

The session became very interactive at that point with Mark asking us about our limitations. Were they imaginary? Were they told to us as kids and thus we were never able to shake them off completely? Very meaningful questions indeed. Mark closed the session by asking us what we were excited about. I suppose it was fitting to close with a note of excitement as all the contemplation had made us pensive, even existential. Even my cheesy sense of humour couldn’t help.

The best part of the evening for me was our walk towards Mr Jerk, a little Afro-Carribean café just off Shaftesbury Avenue. I had the pleasure of a little chat with Mark and discovered his favourite thinkers. They would go in my ever-growing list. All in all, it was a very profound evening and I am thankful to the IMI and to Mark for making it happen.