KARACHI: Hauled off buses, targeted in their clinics, on boulevards, in alleys, in shops, in offices, in processions and pilgrimages, is there any place left safe for Shias in Pakistan? At Ashura, they were chastised for taking out Moharram processions and giving terrorists an open field in which to attack. 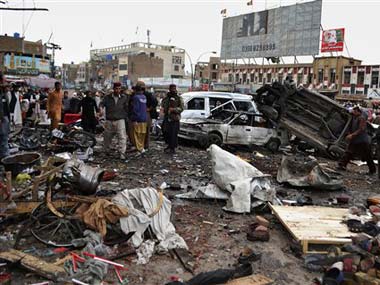 Till yesterday, they might have thought that the inner sanctum of their homes would provide them protection against the growing madness swirling around them. But now the killing fields are their own homes.

Yesterday’s blast in Abbas Town not only blew out shop windows and decimated shopkeepers, hawkers and customers, it also pulverised women and children enjoying the weekend evening breeze on their balconies.

As fires raged through the flats and buried people in piles of rubble, panicked families ran for cover, traumatised toddlers sat on stretchers with bandages on swollen heads and tiny hands, and hospitals were flooded with appeals for blood, the writing was writ large on the wall: Either you are with us or against us.

The irony is that instead of the state machinery issuing this warning to these terrorists, it is the latter who are clearly demarcating the lines for the battle to the finish for the soul of Pakistan. It is the state which has capitulated to these “non state actors”.

In short, our chickens have come home to roost.

Once upon a time not so long ago, pock marked and neurotic Karachi was beautiful and cosmopolitan where people of all faiths happily intermingled at work and home.

In school, no one even thought of asking who was Sunni or Shia, because it was irrelevant.

But now, bigotry reveals itself on social media forums when you are asked repeatedly why you have the audacity to believe that Shias are Muslims.

The disinformation campaign against Shias can be seen in  various hate messages being spread via SMS.

At such times, one is reminded of Nietzche: “People don’t want to hear the truth because they don’t want their illusion destroyed.”

Known for their erudition and culture, Shias are being hunted down from Quetta to Lahore to Karachi and yet people are so cowed down by paralysing fear and cowardice that they are unable to speak up for their brothers and sisters who are in so much pain.

Even at the recently held Karachi Literature Festival, one was told off for expressing support with the Shia community. On spotting a badge which stated, “Stop Shia killings”, an acquaintance cast a fearful look around the crowd: “Beta, you must take it off right now!” “But why?” “Somebody here might kill you,” she insisted, looking over her shoulder.

It is no secret that our curriculum today teaches hatred for minorities and other sects, instead of teaching children to celebrate diversity, because in diversity there is not only beauty but also strength. The different rituals, practices, festivals, dress, traditions et al should be celebrated, not vilified.

What a boring country we would be if everyone was cut from the same cloth.

The Taliban are not known for their great love of literature, but it seems that they are taking a leaf out of George Orwell’s ominous “1984”, which was a prescient warning to the power of totalitarianism and conformity by force.

In the book, individualism was stamped out with gusto and all citizens of the Orwellian had to fit into the slots assigned for them. People were paid to be spies and turn in colleagues and friends to the state, never to be seen again. Those who refused to part with their individuality or loyalty were eliminated.

Unlike the disillusioned Hazaras, who have now started taking up arms to protect their neighbourhoods in Quetta, the Shia community in Karachi remain committed to the path of peace and reconciliation.

They are hoping for a better tomorrow, but who can blame them for losing hope day by day?

The founder of Pakistan, Mohammad Ali Jinnah, was a Shia but today he is called a kafir by many venomous Pakistanis.

Mr Jinnah’s prophetic words “United we Stand, Divided we Fall’’ have never seemed more tragically relevant to the country he founded with such high hopes and aspirations.

Maheen Usmani is a freelance writer who has covered subjects ranging from socio-political issues to womens’ rights to counter terrorism, sports, travel, culture and music. She tweets at @MaheenUsmani. This blog post first appeared on DAWN.com