An Evening of Story and Dreaming

It is sadly rather rare to find Islamic talks which speak so deeply as the one I attended last night. I was very intrigued by the title, ‘The Power of Story and Dreaming’. 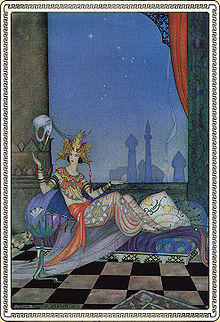 This talk was held at the University College London just five minutes from Euston Square tube. It was organised by the recently formed Muslim Students Development Network[1]who are not your typical ‘halal/haram’ types. Rather, the MSDN is about the development of Islamic culture. You remember culture, the thing we had before everything became bid’ah?

Luqman opened his talk with a short story by Sa’di[2]about a person who was travelling in the desert. Tired, hungry and near death, he found a satchel which contained a sweet. Awash with relief, he reached into the satchel only to find that it wasn’t a sweet after all but a pearl.

From that start, I knew the talk was about to bowl me over.

Luqman then began speaking about the power of story within Islamic culture. The primacy of storytelling, he called it. A dynamic engagement with literature. He believes that storytelling is the yin to dogma’s yang.[3]One cannot be without the other.

Certainly, the Qur’an bears witness to this. In fact, I cannot see how the Qur’an is dogmatic at all. Although it does give theological facts, it is not simply to be professed as dogmatic statements but rather as realisation of signs as part of one’s spiritual evolution. Certainly, the Qur’an’s contents testify to the truth of Luqman’s emphasis on storytelling. Several chapters of the Qur’an are all about sequential narrations and many others intersperse narrations with divine instructions. The Qur’an is most certainly more of a dialogue between the author and the reader than it is a divine textbook of Islamic dogma.

Luqman then quoted a few verses of the Qur’an which are self-referential, that is, talking about the Qur’an’s own purpose for its stories.[4]He demonstrated his own incredible knowledge of the text by showing the subtle differences between the terms used for these stories and parables.[5]He even mentioned that the Qur’an uses two names for itself, ‘qur’an’ and ‘furqan’. ‘Qur’an’ comes from the root ‘qara’aa’ which means to bring together or compile and ‘furqan’ comes from the root ‘faraqa’ which means to separate. This shows two aspects, one of bringing together – like the stories of the Qur’an bring together the reality of the human condition – and the other of discernment, like the dogmatic teachings of the Qur’an brings a clarity of what is right and wrong. Really profound stuff, as you can see.

Luqman then talked about the power of dreams and again went back to the Qur’an for inspiration. He mentioned three Qur’anic personalities who experienced, engaged with and realised their dreams or visions: The Prophets Yusuf, Ibrahim and Muhammad himself.

The story of Yusuf is told quite uniquely in the Qur’an: that of a single contiguous narrative in a single chapter. No other Qur’anic personality enjoys this distinction. His story literally begins and ends with the vision and its fulfilment.[6]The story of Ibrahim with respect to vision[7]is where he was commanded to sacrifice his son which was a test of faith. As for Muhammad, it was about his entry into the sacred mosque which was, as the context of the verse suggests, his foremost achievement[8].

Luqman then related these stories to the present situation of Muslims. Why does the Qur’an contain these stories if not for us to follow, he asks. Where are our own visions and have we endeavoured to articulate, let alone follow them?

He then harked back to the Islamic Golden Age where the qussas or storytellers were cultural staples. These storytellers beguiled the Muslims and others of the human aspect of our community. There are even Islamic treatises on literature and storytelling which are comparable to contemporary texts which sadly, most of us have not even heard of.

He ended by talking about how Muslims knew of the American dream but do they know of the Islamic dream? Dreams are something human beings aspire to but perhaps in the religiosity of Islam, we have forgotten its humanity.

A brilliant talk indeed with a brilliant discussion afterwards. I look forward to more of these by the Muslim Students Development Network in the future! Visit http://www.msdn.org.uk/ for further information.