On the plane from Heathrow I sat next to an Armenian lady. She was born in Aleppo, Syria’s most cosmopolitan city, has lived in New Jersey for years, and is visiting Lebanon for a week, for her nephew’s wedding. I asked why she wasn’t staying longer; it’s such a long flight from the states after all. “Why not?” she replied. “Relatives and politics: these are two reasons not to stay long in the Middle East.” Politics, which tends to suck in relatives, especially if you’re Armenian, or Palestinian, or any variety of Lebanese.

We talked about her grandmother’s sister, a victim of the 1915 genocide of Armenians in Turkey, when somewhere between half and one and a half million people were murdered, either by massacre or by forced marches into the heat of the Syrian desert. Armenians call it ‘the Great Crime’.

The grandmother’s sister, a very little girl at the time, survived the march, but was separated from her family. She ended up outside Mosul, in northern Iraq, where she married a Bedouin (“a man in a tent,” the Armenian lady said). She forgot her language but remembered her name and her Armenian identity. Whenever he went

to town, her husband asked people to let him know if any Armenian turned up. Many years passed, and eventually an Armenian did turn up, and was directed to the tent. So the lost child was at last put in touch with the remnants of her family, and came to spend a month with them in Beirut. Then she returned to the tent and her Beduin life. She didn’t fit in the city.

It’s a relatively happy ending. The caves of eastern Syria are still packed with Armenian bones.

The eastern Mediterranean coastline loomed palely through the porthole: glossy high rise and beach-front shanty towns and the mountains rising bare behind. The airport is named for Rafiq Hariri, the billionaire prime minister assassinated on Valentine’s Day 2005, by the Syrians or the Israelis or Wahhabi-nihilists, depending on your political perspective. The sun set redly as we landed, and was quickly replaced by a fat moon. Warm air met us in the airport car park, like a loving embrace after the miserable British summer.

And to the Mayflower hotel, apparently a journalists’ haunt, in alHamra, an area of bookshops and cafes somewhat faded now but once a refuge for the Arab world’s intellectuals, plotters and poets. Beirut may have been violent and chaotic, but the absence of order also meant a kind of freedom. There was no central authority to censor books and newspapers, no centralized secret police to intimidate writers. Nizar Qabbani (the famous Syrian poet) lived here while married to his Iraqi wife Bilqis, and he wrote about her and Beirut and war. Bilqis was killed during an attack on the Iraqi embassy, where she worked.

Al-Hamra (which means ‘the red’) is situated in what used to be known as West Beirut. During the civil war this section of the city was controlled by the Muslim-Palestinian-Druze-Leftist alliance, and was separated from the Maronite-controlled East by a free-fire zone known as the Green Line.

A notice at my bedside read “It is strictly forbidden to smoke the water pipe (nargheeleh) in the room.” So I refrained from that and switched the TV on instead. The BBC, CNN, lots of Lebanese entertainment channels. No al-Jazeera. So I looked for al-Arabiya, the second most

influential Arabic news channel, and I thought I’d found it. But the channel labeled al-Arabiya was in fact al-Dunya, a privately-owned Syrian regime propaganda channel. This made me suspect that the hotel is owned by sympathisers of the Syrian regime. Pro-regime people despise al-Jazeera (Qatari-owned) and al-Arabiya (Saudi-owned) for their reporting on the Syrian revolution. Al-Dunya has even asserted that the scenes broadcast by these channels of terror and destruction in Homs, Idlib, Dera’a and elsewhere were not in fact filmed in Syria but on uncannily accurate stage sets. (Good news for Syria’s unemployed exiles – there’s work aplenty as revolutionary extras in the Gulf.)

Syria is the new Lebanese dividing line. Most Sunnis oppose the Asad regime; most Shia support it. The Christians and Druze are split. There isn’t much of a Left anymore, but what there is is also split. The tensions have led to gun battles in Tripoli, a city to the north which houses Sunnis and Alawis (most Alawis in both Syria and Lebanon support the Alawi-led Asad regime), and even a few in Beirut.

But this morning the sun is shining, and people are smiling. In the hotel there are writers from Lebanon, Pakistan, Croatia, the Philipines. The Beirut version of the Hay Literature Festival is about to begin. And I plan to go swimming..

Robin Yassin-Kassab is a Muslim Institute Fellow, the co-editor of Critical Muslim and the author of The Road From Damascus, a novel published by Hamish Hamilton and Penguin. He is also the coeditor and regular contributor to PULSE, recently listed by Le Monde Diplomatique as one of its five favourite websites. http://qunfuz.com 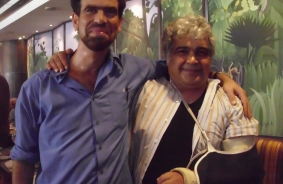 Blogs from Hay Festival Beirut for Literature Across Frontiers - Part 3

Blogs from Hay Festival Beirut for Literature Across Frontiers - Part 2