The Commercialisation of Islamic Identity in Malaysia

Identity – the sense of belonging to a particular group whether cultural, religious or national – can be a powerful tool. Identity unites, mobilises and gets agendas fulfilled. We can easily see when people dress alike, speak alike and especially hate alike even when they don’t really feel that way just so they can synchronise themselves with their peers. Unfortunately, most times when identity is invoked, the leverage involved is gained usually by suppression or repression of other identities. Almost like a drowning man pushing other heads down to keep his own head above water. 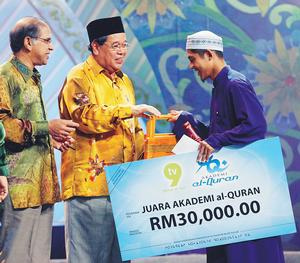 In Malaysia, Islamic identity had never been submerged before recent times. The ethnic Malays, who are by definition Muslim, had always been conscious of their identity. However in recent times – perhaps the last 30 years or so – this identity has transformed into something of a political tool between the Malay nationalist party (UMNO) and the Malaysian Islamic Party (PAS). Each party has been trying to ‘outmuslim’ the other by various Islamisation policies. These have transformed Malay-Muslim consciousness towards a more Islamic slant thus creating a niche for the industrialisation of Islamic identity in Malaysia.

I would not say that Islamic identity is a bad thing in itself but when commercialisation happens, there is always a certain vulgarisation which comes with it. The sacred becomes shamelessly profane and the deep and meaningful becomes invariably superficial. Worse still, to find substance to fill the infinite need for ‘Islamic products’, the suppression of other identities happen.

I was quite actually quite heartened when I heard of ‘Akademi Al-Quran’ (Quranic Academy), a Malaysian reality show on the Islamic media bandwagon. It was finally time, I thought, that focus was given on the Quran since it is universally the primary source of revelation for all Muslims. I was hoping for some meaty discussions on the Quran’s teachings but I was also realistic – bearing in mind Malaysia’s standards of conservatism – I was willing to settle for the discussions to be one sided. Maybe they would simply get a few scholars who would expound on Quranic interpretation while the rest of us listen reverently.

Sadly, I was not given even that. Akademi Al-Quran was a reality show based on simply recitation. The contestants were tested on their ability to musically recite the Quran with all the given recitations. Not only that, the dramatic elements of reality shows have also been included. It was like watching the Apprentice with Quranic reciters! Perhaps this attracts some people but for me, an iconic ‘you’re fired’ statement in this context is tremendously off-putting. It feels like something which is so spiritualising is dragged through the mud.

It is the same for magic and other superstitious elements. There are even programmes which address such problems. What then happens if one doesn’t agree that magic has a supernatural origin but rather is perhaps a psychological disturbance? Of course such threatening views would be suppressed because it threatens the industry of solutions to magical problems! The industry of Islamic products cannot escape the realities of economics. When a product is threatened, it must seek political support in order to throttle opposing views before they gain support. No wonder then that in Malaysia, disagreeing with the official view is almost a crime.

Perhaps the greatest vulgarisation to Islam by this new industry is displayed in the Malaysian TV programme, ‘Imam Muda’ (Young Imam). In this programme, young male imams (no females please!) are put through their paces to see who is the best in the shoes of the imam. They are tested on delivering sermons, giving counselling and others. The winner would be given a scholarship to study in the University of Medina in Saudi Arabia, 20,000 Malaysian dollars and a new car. Not exactly an emulation of the Messenger of Allah, if you ask me!

Criticising this show is like shooting fish in a barrel. The institution of the imam simply cannot be traded off in this way! The leader personalities in the Quran are people who live in the real world. They were not religious functionaries who were trained in madrassas (Islamic schools), let alone who won them in Islamic reality programs. These young imams from this competition would never understand real world situations so how on earth can they be touted as leaders of the ummah. An imam in the Quranic sense is one who undergoes trials and tribulations and through his or her experience, can lead other people towards higher ideals. Material benefits do not figure in his or her motivations.

Once again, the commercialisation of the Islamic identity has vulgarised something profound and made it cheap tat.

None of us are immune from economic forces. After all, economics govern the rules of physical production and we live within those constraints. However, the sacredness and profundity of the Islamic experience should be kept apart from this if we are to truly enjoy its benefits.