Earlier this year, encouraged by the successful revolutions in Egypt and Tunisia, thousands of peaceful protesters took to the streets of Bahrain to call for political reform. They were met with a brutal and systematic response that included the killing of seven, the injuring of hundreds, and assaults on medical personnel. Inevitably health professionals in the front-line were treating wounded civilians, and developing firsthand knowledge of government atrocities.

Bahrain’s Shi’a majority have long criticised their mistreatment by the Sunni ruling government and resent high rates of unemployment among Shi’a, and their under-representation in the government and the security forces. The already tense situation escalated further when martial law was imposed on March 15th after King Hamad called in 2,000 troops from Sunni Gulf states to be deployed to the streets.

Claiming that the Salmaniya Medical Complex had become a base of operations for “saboteurs who sought to spread chaos, cause disruptions and trouble and create sedition”, the Bahraini authorities occupied the building, arrested doctors, and prevented the wounded from receiving care. On May 3rd Justice Minister Khaled bin Alial-Khalifa announced that 47 medical staff would face criminal charges. 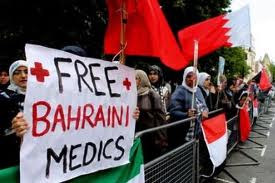 On September 29th a military court sentenced 20 medical professionals to from 5 to 15 years in jail on charges that included inciting to overthrow the regime, possession of weapons, and forcefully taking over control of the Salmaniya Hospital Complex. One doctor recalls with outrage the tortures inflicted as police tried to force her to confess to "a doctors' plot" to overthrow the Bahraini government. "It was a nightmare", the doctor said, "They gave me electric shocks and beat me with a cable."

The medics all say they are innocent and the international community has not found fault with them, but they have found fault with Bahraini courts. Hans Hogrefe of Physicians for Human Rights described their trials as “flying in the face of international legal standards”. In a volte face, on October 5th Bahraini judicial authorities nullified the convictions and the medical workers were released from custody, with new trials scheduled in a civilian court. The decision appears to be a tactical retreat by Bahrain’s Sunni monarchy in the face of strong international protests over the punishments, including criticism from the Secretary General of the United Nations, Ban Ki-moon.