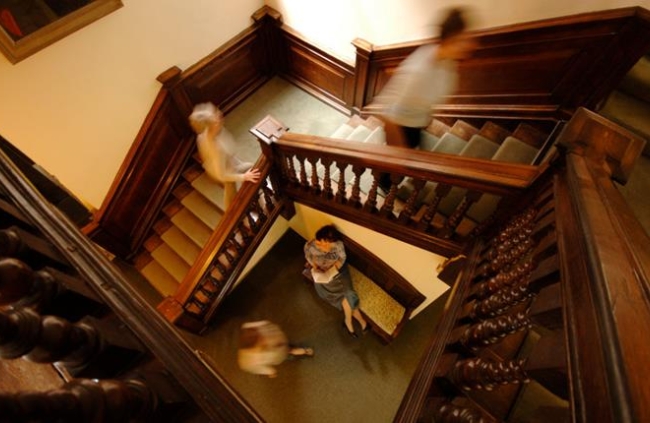 Fellows and friends of the Muslim Institute are invited to book their places now for the Fourteenth Annual Muslim Institute Winter Gathering. This year we explore what it means to be Muslim in Europe. Speakers and sessions will examine the centuries-long history of Islam's presence in Europe and how it shapes society today, against the backdrop of the rise of the far-right and the spectre of climate crisis.

As before our base is Sarum College, which offers friendly, comfortable accommodation in single, twin and double rooms, mostly en-suite, and all halal catering. The weekend is free for all Fellows and is inclusive of accommodation, all meals and refreshments from registration at 4-6pm on Friday 21 October through to lunch on Sunday 23 October. PLEASE NOTE ACCOMMODATION AT SARUM COLLEGE IS NOW FULLY ALLOCATED.

The programme for the weekend is as follows:

Dr Hisham A. (H.A.) Hellyer (Cambridge University) looks at challenges facing the continued existence of Muslims in Europe, against the background of internal Muslim challenges, and external rejectionists of Islam in this continent.

9.30-11am Shaping a European Muslim Identity

Zahrah Nesbitt-Ahmed (UNICEF), Sofia Tsourlaki (SOAS) and Katharina Schmoll (University of Leeds) reflect on the ever-evolving discourse on what it means to be a European Muslim, and how it informs their lived experience. Chaired by Serena Merrino (UCL)

2-3.30pm Europe, Russia and the fight for freedom in Ukraine and Chechnya

4-5pm Ruminations: Framing a Sense of Self and Coming to Terms with the Other

Tahir Abbas (Leiden University) and Beacon Books launch this social commentary examining the intersections of class, race, ethnicity, and religion in the context of the British Muslim experience through the lens of Professor Abbas’s own personal experiences as a British-born Muslim growing up in Birmingham, working in central government during the 9/11 attacks, and eventually becoming an academic. Chair: Uzmah Ali, (Muslim Institute Trustee)

What better way to showcase the talent among our attendees than with open mic performances on a Saturday night? Whether it’s spoken word, comedy, a song, a sketch, or a magic act, we are ready to be entertained by all bursts of creativity.

Sharon Memis, formerly of the British Council and now of the Association of Commonwealth Universities, reflects on an event-filled journey in global cultural relations. Chaired by Iqbal Asaria (London Institute of Banking and Finance)

Journalist Asyia Iftikhar, photographer Rehan Jamil and ‘the fifth generation’ invite attendees to take part in a conversation on what it means to be ‘here’ when your ancestry hails from ‘elsewhere’. Chaired by Muslim Institute director, Samia Rahman

Tahir Abbas holds the Chair in Radicalisation Studies at the Institute of Security and Global Affairs at Leiden University in The Hague. Previously, he was a Senior Research Fellow at the Royal United Services Institute in London, a Professor of Sociology at Istanbul University, and a Reader in Sociology at the University of Birmingham. He has also been a visiting scholar at New York University, the London School of Economics, and the University of Oxford Centre for Islamic Studies. He is currently the Scientific Coordinator of the H2020 Research Action and Innovation grant, Drive (1 Jan 2021-31 Dec 2023), which explores the role of social exclusion in understanding the nature of far-right and Islamist extremism in northwest Europe. With academic partners (Liverpool University, Aarhus University, Oslo University, University of Cambridge, and Umeå University) and civil society organisations (ConnectFutures and Fryshuset), this project will produce cutting-edge social science contributions and public mental health interventions.

Rim-Sarah Alouane is a French legal scholar. As a Ph.D. candidate in Comparative Law at the University Toulouse-Capitole in France, her research focuses on religious freedom, civil liberties, constitutional law and human rights in Europe and North America. Ms Alouane’s doctoral thesis explores the practice of Western judges (more specifically in North America, Europe and France) with regard to the protection of religious freedom. Ms Alouane has explored these issues as a guest lecturer at several global institutions. In the United States, these include Georgetown University, Emory University, University of Texas at Austin, and Harvard Law School, where she was selected as one of ten participants from a global pool of applicants. In Europe, Ms. Alouane has guest lectured at the Université Paris La Sorbonne, Pázmány Péter Catholic University in Hungary and the University dell’ Insubria in Italy. Her work has been published by leading law and social sciences global journals as well as newspapers including Atlantic Council, Brookings, Foreign Policy and The New York Times. Ms. Alouane frequently appears on TV and radio in America and worldwide, including NPR, Al Jazeera, BBC, CBC  and France24 where she discusses discrimination, human rights violations and politics.

Amie Ferris-Rotman is Global News Editor at New Lines Magazine. She has reported from Russia and the surrounding region for over a decade, most recently as Moscow correspondent for The Washington Post. After a posting in Afghanistan with Reuters, she founded Sahar Speaks, a programme for Afghan women journalists that won her the British press award for innovation.

Anna Gunin is a translator from Russian. Among her translations are Oleg Pavlov’s award-winning novel Requiem for a Soldier and Mikail Eldin’s war memoir The Sky Wept Fire, winner of an English PEN Writers in Translation award. She is the co-translator of Svetlana Alexievich’s Chernobyl Prayer (Penguin Modern Classics), lauded in the Times Literary Supplement as a ‘masterly new translation’ that ‘retains the nerve and pulse of the Russian’. Her translations of Pavel Bazhov’s fairy tales appear in Russian Magic Tales from Pushkin to Platonov (Penguin Classics), shortlisted for the 2014 Rossica Prize. She has also translated film scripts by Yury Arabov, Denis Osokin and Marina Potapova, plays for the Royal Court International Department and poetry by Ilya Kormiltsev among others.

Dr Hisham A. (H.A.) Hellyer is a scholar and author focusing on politics, international relations, security studies, and faith, in the West and the Arab world. Dr Hisham A. Hellyer is a fellow at the Faculty of Asian and Middle Eastern Studies at the University of Cambridge and a scholar at the Carnegie Endowment for International Peace (CEIP) in Washington DC. Concurrently, he’s a Senior Associate Fellow in International Security Studies at the Royal United Services Institute (RUSI) in London. Dr Hellyer’s previous academic posts include attachments at the American University in Cairo, Harvard, and Warwick, where he read for his PhD. His former policy positions were at Brookings and Atlantic Council in DC, and the Institute of Strategic and International Studies in Malaysia. He is regularly called upon by ministerial level policy members of government in the US, the UK, the EU, and elsewhere for his expertise. Dr Hellyer is also a scholar of Islamic Studies, in both seminary and academic environments, and is regularly included in the scholarly section of the annual global list (initiated by Georgetown University and the Royal Islamic Institute for Strategic Studies) of ‘The 500 Most Influential Muslims’. In 2020, Dr Hellyer was elected as Fellow (FRSA) of the Royal Society of Arts in London due to his contributions in his subject areas. An author of 7 books, his analysis is regularly featured in leading outlets such as the Washington Post, CNN, the BBC, Foreign Policy, the New York Times, the Guardian, Politico, and the Financial Times.

Rehan Jamil describes himself as a social documentary photographer who is primarily concerned with communities in transition. In recent years he has been working with Muslim communities across the UK.

Daria Mattingly is writing a book on the identifiable and memorial traces of the rank-and-file perpetrators of the 1932-33 famine in Ukraine, known as the Holodomor. Daria received her Ph.D. at Cambridge University and MA in Russian History at University of Bristol. Daria was a part-time teaching fellow at the University of Bath before coming back to Cambridge. She is on the selection committee of the Danyliw Research Seminar on Contemporary Ukraine, University of Ottawa. Daria's research interests include perpetrator studies, social and cultural history of the Soviet Union, with an emphasis on Ukraine. Daria has provided research assistance to the latest book by Anne Applebaum, Red Famine Famine. Stalin's War on Ukraine Allen Lane, which was published in 2017.

Sharon Memis is the Chief Operating Officer at the Association of Commonwealth Universities. Prior to joining the ACU, Sharon held a variety of senior posts with the British Council including in India, the United States, Brussels and London, contributing to the internationalisation of education and culture for the UK. Sharon has also worked as a consultant in international cultural relations and both presents and writes on a range of topics related to international engagement including strategy and impact evaluation.  As a qualified teacher, Sharon has taught at schools and universities in the UK and overseas. A linguist by background, Sharon speaks six languages.

Zahrah Nesbitt-Ahmed is a Research Manager at UNICEF where she manages large-scale research programmes on gender equality and public policies. She has also worked in a range of institutions, including ActionAid UK and the Institute of Development Studies at the University of Sussex. Zahrah holds a PhD in Human Geography and Urban Studies and an MSc in Urbanisation and Development - both from the London School of Economics, and a BSc in Human and Physical Geography from University of Reading. She currently works between Italy and the UK, but is still yet to perfect her Italian.

Katharina Schmoll is a lecturer of media and communications at the University of Leeds. Her research explores contemporary relationships and social cohesion in the Middle East and post-secular European societies. She is particularly interested in how listening can improve well-being, empowerment and belonging.

Sofia Tsourlaki is a university lecturer of Islamic Studies at FiE London (Department of Sociology and Religion). She is also a supervisor of Master’s dissertations (departments of Media and Communications and Gender Studies) and a PhD researcher (Department of History and Religions) at SOAS University of London. Sofia’s PhD research examines the impact Progressive and Feminist Islam have on Muslims globally and the social media’s role in this. Sofia participates in conferences in Europe, India and the USA, where she presents her latest research on Islam in relation to sociology, social anthropology, technology and media. Her first journal article, 'Khaled Abou El Fadl and Amina Wadud’s (re)politicisation of the mosque and employment of social media as a means of shaping religious identity based on values of Progressive Islam', was published in 2020. Her latest article, 'Artificial Intelligence on Sunni Islam’s Fatwa issuance in Dubai and Egypt'; will be published in December 2022. Sofia’s public engagement activities manifest in public discussions of matters of Islamic faith and in her YouTube channel where she teaches Islam to Greeks, carries out a series of Tafseer videos and addresses significant misunderstandings and distortions of Islamic values by Muslims.