Winter Gathering 2021: ‘Knowing One Another’ - Life and Intellect of Merryl Wyn Davies 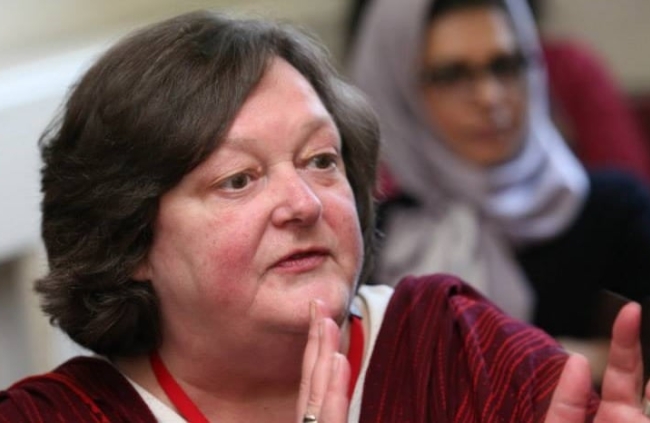 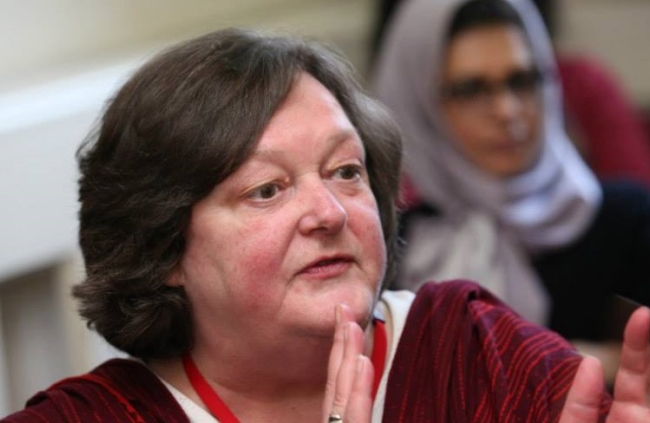 On 1 February 2021, the Muslim Institute community lost a towering thinker, colleague and much-loved friend, Merryl Wyn Davies. In a tribute to the former director of the Muslim Institute, this year we will gather in-person on 12-14 November at Sarum College, Salisbury (subject to any change in Covid-19 guidance) for the Institute's annual Winter Gathering to celebrate Merryl’s life and legacy. This 3-day all-inclusive residential event is restricted to Fellows only and numbers are limited so please book your place by emailing info@musliminstitute.org.

Theme: ‘Knowing One Another’: Life and Intellect of Merryl Wyn Davies

A paper by Jeremy Henzell-Thomas will be presented by Uzmah Ali and introduced by Ziauddin Sardar, who will also give a brief outline of Merryl’s life.

Sahil Warsi and Rubina Jasani discuss their experiences as anthropologists and ask 'how do we know one another'?

Chair: Shamim Miah, who talks about the importance of Merryl’s seminal book

Personal reminiscences from Anwar Ibrahim,  Scott Jordan and others

Batool Al Toma is the founder and Director of the Convert Muslim Foundation. In her role as Director of the New Muslims Project at The Islamic Foundation in Markfield, Leicester, she established a UK based service related to the support, education, counseling and continued development of converts to Islam in Britain. She is the Editor of the Meeting Point, the magazine that has come to be recognised nationally as unique to the convert community. Over the years she devised a number of education and training programmes which have been delivered in the UK and Europe and has acted as a media consultant on aspects of Islam and family life and conversion to Islam in the UK and beyond. Batool was a member of the Cambridge Theology Board and its symposiums relating to Contextualising Islam in Britain and was the principal lead on The Narratives of Conversion to Islam in Britain -Female Perspectives.

Luqman Ali specialised in the languages (Arabic, Persian and Urdu), literature and cultures of the Middle East and the Indian Sub-continent. He then spent a decade working as a linguist, writer and translator before serving for 3 years as programmes manager for a London-based humanitarian NGO where he raised funds from European GO's and NGO's in order to deliver humanitarian projects for refugees and displaced persons in the Middle East with DFID and UNHCR. In 1997, Luqman co-founded Khayaal, the first professional theatre company dedicated to the exploration of classic Muslim literature through contemporary stagecraft as a means of fostering greater intercultural and interfaith engagement and understanding. He adapted and produced Khayaal’s award-winning debut production, Conference of the Birds, in London in 1998. He went on to pioneer the adaptation of the works of an array of Muslim litterateurs as well as folktales from African, Arabic, Turkish, Chinese, Persian and Urdu cultures, staging these works at The Globe’s Shakespeare and Islam Season (2004) and at The British Museum’s critically acclaimed Hajj Exhibition (2012) and its Albukhary Foundation Gallery of the Islamic World launch events (2018) as well as in theatres, corporations, schools and communities throughout the UK and beyond. Luqman is currently working to nurture an inclusive humanitarian discourse of story and dream in Muslim communities and between those communities and wider society through Khayaal’s national on-demand Theatre-without-Walls programme that includes themed adaptations of wisdom tales from Hinduism, Judaism, Christianity, Islam and Sikhism while also developing the company’s next medium scale production exploring the intersection of Britain and Islam in the story of coffee.

Uzmah Ali is a daughter of the Punjab, a native of Cardiff, and a resident of London. She found her time at Oxford University as equally educational as her time in her parent’s village in Pakistan. She works in the public sector as a manager, and likes to write poems whilst eating chocolate and drinking tea. Her poetry collection Breathe Before Thought is published by Waterloo Press.

Yasmin Alibhai-Brown came to the UK in 1972 from Uganda after completing her undergraduate degree at Makerere University where she passed with an exceptional first class degree in English. She was awarded a scholarship to pursue post-graduate studies at Oxford where she obtained an M.Phil degree in literature in1975. Now an award-winning journalist, she has written for The Guardian, Observer, The New York Times, Time Magazine, Newsweek, The Evening Standard, and other newspapers and was a weekly columnist on The Independent for eighteen years. She was the first regular columnist of colour on a national newspaper in the UK, the first female Muslim too. She writes a weekly column for I newspaper and regularly appears on news and talk shows. In 2007 she co-founded British Muslims for Secular Democracy.

Jeremy Henzell-Thomas is a Research Associate and former Visiting Fellow at the Centre of Islamic Studies, University of Cambridge.

Anwar Ibrahim joined the ruling United Malay Nationalist Organisation (UMNO) political party in 1982. Already active in Malaysian politics, he was familiar with the jail cells Malaysian political dissidents were put within. He was a pivotal figure in youth organisations, including ABIM (Muslim Youth Movement of Malaysia) which he helped fund. In 1974 he would be detained for the first time under the International Security Act (ISA) while protesting rural poverty and hunger. In 1981, he was one of the founders of the International Institute for Islamic Thought (IIIT). Once in UMNO he quickly rose up the ranks of Mahathir Muhammad’s Malaysia throughout the 1980s, serving as Minister of Culture, Youth and Sport, Minister of Agriculture, and Minister of Education.

In the 1990s he would serve as Minister of Finance and be elevated to Deputy Prime Minister in 1993 until his sacking in 1998, and eventual arrest that same year under the ISA. He was imprisoned until 2004 where he was beaten and placed in solitary confinement. Once freed, he was disqualified from running for office in Malaysia until 2008, barring a pardon from the King. He spent this time carrying out not-for-profit work and teaching at institutions such as St. Anthony’s College, Oxford, and Johns Hopkins and Georgetown in the US. Upon his arrest Anwar and his colleagues had founded the Reformasi movement for reform of Malaysian politics and the People’s Justice Party, which he would run under when he returned to politics in 2008, becoming opposition leader for the first time. Following a questionable election defeat in the 2013 general election, Anwar was again imprisoned from 2014 until 2018. In the historic 2018 general election, Anwar’s coalition would defeat the coalition that had ruled Malaysia since its independence from Britain. Mahathir would again become Prime Minister while Anwar was released and pardoned by the King. Positioned to be the next Prime Minister, a coup in 2020, just as the Covid-19 pandemic was in its infancy would see Anwar moved again to being leader of the Opposition.

Rubina Jasani has a PhD in Anthropology from the University of Sussex, a MPhil in South Asian Studies from Jawaharlal Nehru University, New Delhi, and an Undergraduate and Postgraduate degree in Political Science from Goa University. Her doctoral work examined moral and material reconstruction of life after anti- Muslim riots in 2002. India. She has since developed research on Muslim Widowhoos and Sexuality and Masculinity and Manhood after conflict in India. Her work on moral reconstruction of life sparked  her interest in culture and mental health and her post-doctoral work at the Health Science Research Institute, Warwick examined over representation of black and ethnic minority young people in Psychiatric services in Birmingham and examined the subjective experience of sectioning under the mental health act. She has also developed an award-winning project with Dr. Jack Marie de Lopez and Women Asylum Seekers Together (WAST) a user led organisation in Manchester called No-Recourse which tests peer-ethnography as a research method with women asylum seekers and develops educational and training material to be used in Medical Schools, Nursing colleges and school of mid-wifery on the rights of asylums seekers. Currently she is the Co-investigator on a British Academy funded grant studying Islamic Healing Practices in Manchester.

C Scott Jordan, philosopher and political scientist, is a writer, editor, and podcaster currently working extensively in Malaysia and South East Asia. A specialist in East-West Studies, he writes extensively on postnormal times, politics, culture, philosophy, and education. He is the author A Very British Muslim Activist: The life of Ghayasuddin Siddiqui, and has co-written and edited various works with other members of the CPPFS. Scott is attached to the Asian World Center at Creighton University in Omaha, Nebraska, where he produces the radio podcast show, Tea Talk Asia. He is a member of the Nonkilling Consortium International, and has worked with an international summer camp in China through the Soong Ching Ling Foundation. He is also a Deputy Editor of the influential quarterly, Critical Muslim.

Eleanor Martin obtained a BA Hons. in Drama & English Literature prior to training as a professional actor at Mountview Theatre School. She went on to work in theatre, film and television in Britain and abroad including parts in popular television drama series. Eleanor is also a theatre-in-education specialist with 25 years of experience delivering training in drama to adults and children nationally and internationally. As a founding member of Khayaal, Eleanor has researched, produced, devised, directed, and performed for the Company since its inception. She co-directed and performed in the Conference of the Birds, Khayaal’s award winning debut production and has since played a pivotal role in all of Khayaal’s productions. For four years Eleanor toured Khayaal’s one woman play, Sun & Wind. She most recently devised and delivered bespoke workshops for the British Museum’s critically acclaimed Hajj Exhibition as well as for Shakespeare’s Globe, Living Islam Festival and Goldsmiths University.

Naz Shah is a British Labour Party politician. She was elected at the 2015 general election as Member of Parliament (MP) for Bradford West, winning the seat from George Galloway of the Respect Party. Born in Bradford, she was the chair of mental health charity, Sharing Voices Bradford, and had previously worked as a carer for disabled people, as an NHS Commissioner and a director for a regional association supporting local council, before becoming MP. She is currently serving as shadow minister for community cohesion.

Ahmed Versi is editor of The Muslim News. Reaching over 150,000 people in the UK alone, it has the largest circulation of newspapers for not only Muslims in Britain, but it is also the largest circulating ethnic newspaper in the UK reaching the most diverse ethnic communities. Ahmed has been able to increase the circulation of the The Muslim News from 10,000 in 1989 to what is now the only minority publication to transcend conventional ‘ethnic’ boundaries, with its circulation of 150,000 and website receiving up to 1.6 million hits a month. In March 2000, Ahmed launched the first ever The Muslim News Awards for Excellence. He founded the Muslim Women’s Sport Foundation  and until recently was Deputy President of the International Islamic Women’s Games representing non-Muslim countries. Ahmed is also Parliamentary Gallery and Press Lobby journalist.

Sahil Warsi is an independent anthropologist. He specialises in field-based research to provide social insight and deliver change in complex situations across South and Central Asia, the MENA-region, the US, and the UK. He has trained in the Afghan rubab, the tuba, and classical guitar.

Jim Wolfreys is a graduate of Liverpool University, where he obtained his PhD and now lectures in French and European politics at King’s College London. He is co-author (with Peter Fysh) of The Politics of Racism in France and the author of Republic of Islamophobia: The Rise of Respectable Racism in France.